Home International Master of Faster: Ogier takes the lead at the Rally Germany 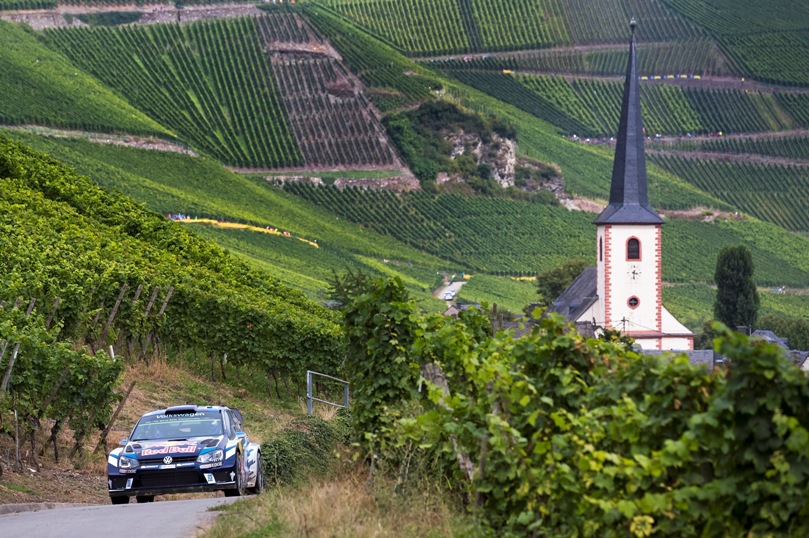 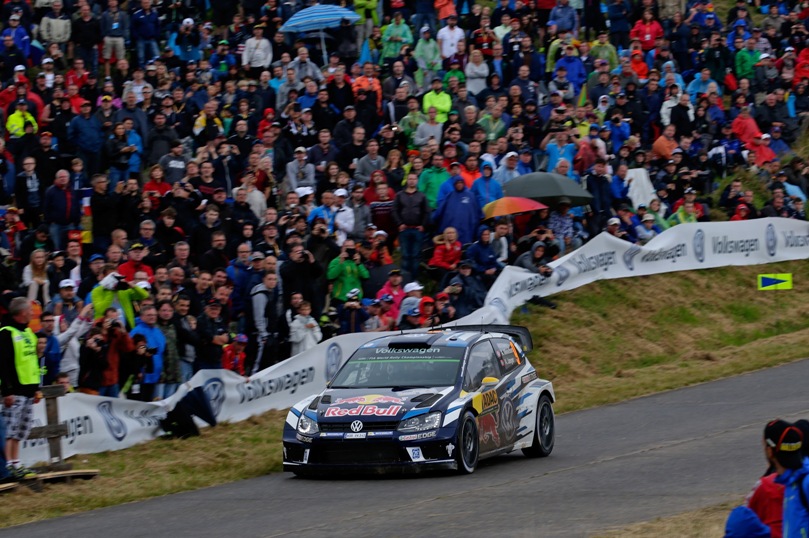 A good eye for the tyres – and the winner at the end of the day: Sébastien Ogier/Julien Ingrassia (F/F) have moved into the lead at Rally Germany on the back of a performance worthy of world champions. Despite the frequently-changing conditions out on the route, which proved incredibly difficult to predict, they leapfrogged ahead of Volkswagen team-mates Andreas Mikkelsen/Anders Jæger (N/N) at the top of the overall standings.

They extended their lead to 33.4 seconds and are on course for victory with just 59.26 kilometres of special stage remaining on Sunday. In contrast, second place at round nine of this season’s FIA World Rally Championship (WRC) is still wide open. Mikkelsen/Jæger have put themselves in pole position, and go into the final day 3.6 seconds clear of Dani Sordo/Marc Martí (E/E, Hyundai) and 4.0 seconds ahead of Thierry Neuville/Nicolas Gilsoul (B/B, Hyundai).

Tyre selection for the iconic “Panzerplatte” stage on the Baumholder military training ground, which hosted five of the day’s nine stages, proved to be a major challenge, with a mixture of damp and dry ground in the morning and drying roads on the afternoon loop.

Four times the drivers and co-drivers were faced with the dilemma of whether to put their faith in the harder or softer-compound Michelin competition tyre. Ogier/Ingrassia and Mikkelsen/Jæger opted for completely different strategies. Mikkelsen/Jæger went for an all-soft combination in the morning, with Ogier/Ingrassia adopting that same tactic in the afternoon.

Quotes after day two of the Rally Germany

Sébastien Ogier, Volkswagen Polo R WRC #1
“First of all, I am relieved that, given the circumstances, Stéphane Lefebvre and Gabin Moreau are okay after their big crash. Julien and I would like to take this opportunity to wish them both a speedy recovery! On the whole, it was a long and tough day of rallying, but I am certainly pleased with our performance. The right tyre selection played a key role. It was very slippery in places, particularly on the long Panzerplatte stage, which meant that the decision to go for soft tyres on the second run was spot on. The lead is reassuring, but we still have about 60 kilometres of special stage in the vineyards ahead of us. We know from experience that anything can happen there.”

Jari-Matti Latvala, Volkswagen Polo R WRC #2
“First and foremost, we would like to wish Stéphane Lefebvre and Gabin Moreau a good recovery and hope they are back in good health soon. Today was predominantly about the weather and tyre selection. It was very wet in places in the morning, and then it kept raining on and off. After I only managed to complete seven kilometres, I took a while to find my rhythm. We were still able to win a stage, even though we are well down the overall standings. Tomorrow I will try to pick up a few points.”

Andreas Mikkelsen, Volkswagen Polo R WRC #9
“Today was about making the right tyre selection, controlled attack, and making as few mistakes as possible. The day began almost perfectly for us – the right tyre selection meant I was able to gain some time on Seb, but I then made a mistake that cost us a lot of time. We tried to make up ground with another aggressive tyre strategy in the afternoon – but our selection was simply not the right one. All in all, our focus now is on second place –the battle against Thierry Neuville and Dani Sordo is going to be really exciting againtomorrow. I would have liked to have been battling for the win. However, despite the minor disappointment for us personally, there is some good news to come out of today: Stéphane Lefebvre and Gabin Moreau are doing okay after their big crash. Anders and I wish them all the best and a speedy recovery.”

Jost Capito, Volkswagen Motorsport Director
“An extremely tricky day at the Rally Germany, but one that all three Volkswagen duos dealt with well. Tyre selection was far from easy, as the changing conditions out on the route did not really give any indication as to what would be the best choice. Andreas Mikkelsen got lucky on one occasion, Sébastien Ogier on another. Seb also drove extremely well on the Panzerplatte – he deserves his lead. Andreas also produced a strong driving display and has a thrilling finale ahead of him tomorrow. If he drives as well as he did today, I am sure he will come out on top in the three-way battle for second. Jari-Matti Latvala could not really hope for much on his return under Rally2 regulations – for him, tomorrow is solely about scoring points on the Power Stage and towards the Manufacturers’ Championship.”

… three taxi rides for charity. Fans at the “Panzerplatte” had the opportunity to bid for one of three rides in the Polo R WRC alongside “Mr. Maximum Attack”, Markku Alén. The proceeds go towards the RTL foundation “Wir helfen Kindern”. About 2,000 Euros were raised in total. The three highest bidders also enjoyed an unforgettable ride in a World Rally Car with the unofficial 1978 world champion at the wheel.

… a bit of nostalgia. Right opposite the Volkswagen service area at Messepark Trier, where the three Polo R WRC cars are prepared for the special stages, a Race Touareg 3 from 2011 is the landmark beckoning people to visit a small but excellent exhibition to mark 50 Years of Volkswagen Motorsport. Roughly half of all the Volkswagen mechanics working on the WRC project today were also in action at the Dakar Rally back in the day. As such, they can be forgiven for the odd nostalgic glance in that direction. In 2011, Nasser Al-Attiyah/Timo Gottschalk (Q/D) presented Volkswagen with its third win in a row at the desert classic – the team has fantastic memories of a successful and adventurous time. The Race Touareg 3 is not the only highlight of the exhibition in Trier – others include the twin-engine Golf that was on course to set the fastest time at the iconic Pikes Peak hillclimb in 1987.

Provisional result after day two of the Rally Germany