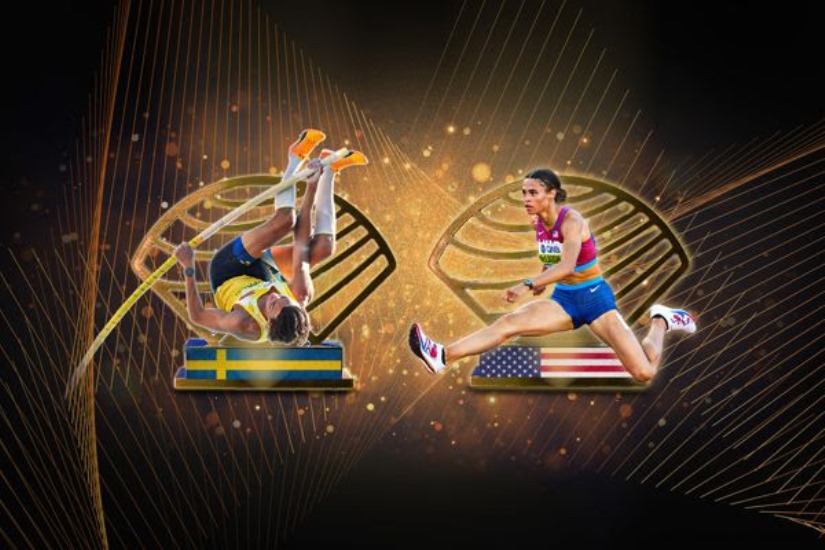 World champions and world record-breakers Sydney McLaughlin-Levrone and Mondo Duplantis have been named the World Athletes of the Year.

They were the final winners to be revealed as part of the World Athletics Awards 2022, along with the winners of the Rising Stars awards: Serbian javelin thrower Adriana Vilagos and US sprinter Erriyon Knighton.

McLaughlin-Levrone and Duplantis – winners of the Rising Stars awards just four years ago – broke the world records in their respective disciplines on more than one occasion this year, with their final record-breaking performances coming at the World Athletics Championships Oregon22.

McLaughlin-Levrone improved her own world 400m hurdles record by 0.78, first to 51.41 at the US Championships and then to an awe-inspiring 50.68 at the World Championships. That secured her a first individual senior world title, and she followed it by anchoring the US team to another 4x400m victory.

The 23-year-old made a statement with her first 400m hurdles race of the year, clocking 51.61 in Nashville in early June. At that point it was the third-fastest time ever recorded, but the all-time list soon underwent further revisions.

Lining up at the US Championships at Hayward Field, McLaughlin-Levrone stormed to victory in the 400m hurdles in 51.41, taking 0.05 off the mark she set at last year’s Tokyo Olympics.

“I think there’s a little bit more in the tank there,” she said after her US Championships win. “Hopefully when it’s time we can just empty it completely.”

Back at Hayward Field a month later, McLaughlin-Levrone obliterated her previous best, running 50.68 as the home crowd and the rest of the world watched on in amazement.

“All of my goals were accomplished this year,” said McLaughlin-Levrone. “We were able to accomplish everything we set out to do. It couldn’t have been any better, and I was so grateful that I was able to produce that performance in front of a home crowd.”

Just when you think Duplantis could not be more dominant, the Swedish pole vaulter has a season like 2022, during which he set three world records, won two global titles, won 18 of his 19 competitions, and vaulted six metres or higher 23 times.

Duplantis, despite only just turning 23, now has more six-metre clearances than any other pole vaulter in history.

His record-breaking 2022 campaign began with an undefeated indoor season, during which he set a world record of 6.19m in Belgrade. He returned to the Serbian capital two weeks later for the World Athletics Indoor Championships, where he struck gold with 6.20m, another improvement on his own world record.

He was then victorious on the Wanda Diamond League circuit, including a 6.16m vault in Stockholm, the highest ever outdoor vault in history. It was the perfect warm-up for the World Championships three weeks later.

As the last athlete competing on the final day of competition at the World Championships in Oregon, Duplantis soared over a world record of 6.21m with room to spare.

Less than a month later, he retained his European title with a championship record of 6.06m in a competition where he registered no misses. He then wrapped up his season with a victory at the Wanda Diamond League Final in Zurich.

“Going into the year, I had really high expectations of myself and I had some really big goals,” said Duplantis. “I wanted to win the world indoors, the world outdoors, the Europeans, the Diamond League final, and I wanted to break the world record a few times.

It was a season of back-to-back successes for this year’s Rising Stars.

Vilagos successfully defended her world U20 javelin title, doing so with a championship record of 63.52m and breaking the European U20 record in the process. Less than three months later, she claimed silver at the senior European Championships in Munich.

“Defending my world U20 title in Colombia was my main goal, but winning a medal at the European Championships was the biggest surprise,” said Vilagos. “It was a good year and this award crowns it.”

Knighton, meanwhile, has been named Rising Star for the second year in a row. He clocked a lifetime best of 19.49 in April which couldn’t be ratified as a world U20 record, but he went on to break the mark officially at the US Championships, where he ran 19.69. He followed that with a bronze medal at the World Championships in Oregon, then went on to achieve victories on the Continental Tour and Diamond League circuit.

Remarkably, both Rising Stars will still be U20 athletes for 2023.

“Winning this award back to back means my talent is getting recognised on a bigger stage,” said Knighton, the first athlete ever to win two Rising Star awards. “I’ve put in the work to achieve this and I’m very grateful.”

At the World Championships in Oregon, Holly Bradshaw injured herself after her pole snapped during the pole vault warm-up session. Her fellow competitor Katie Nageotte immediately went over to support her. Knowing she would no longer be able to contend for a place in the final, Bradshaw withdrew from the competition, thus allowing another athlete to advance. Bradshaw received a lot of abuse on social media for withdrawing, but Nageotte again offered support by taking to Twitter in defence of her competitor.

Following the Russian invasion of Ukraine earlier this year, the majority of Ukraine’s elite athletes were unable to continue training, let alone compete. But the country’s athletes showed remarkable resilience and made the most of any support that came their way – including the Ukraine Relief Fund, which was launched in April by World Athletics, the International Athletics Foundation and the Diamond League Association. Ukraine’s athletes went on to win medals at all three global track and field championships this year.

Despite the conflict in their home country of Ukraine, Gennadii Zuiev continued to guide high jumper Andriy Protsenko to world and European medals in 2022, also working with other athletes to overcome the difficulties they faced. Zuiev and Protsenko both live in the Kherson region of Ukraine and Protsenko spent about five weeks under the Russian occupation in March and April. Improvising with home-made equipment, he was still able to train and their hard work paid off when Protsenko made the podium in Oregon and Munich.

Woman of the Year Award

A champion for gender equality and the empowerment of women in athletics, two-time world 4x400m medallist Donna Fraser has been a World Athletics gender leadership moderator since 2019 and regularly features in the governing body’s speaking panels and webinars on the topic, also frequently appearing in the media to talk about diversity and inclusion.

World Athletics Photograph of the Year

Martin Rickett’s photograph of a steeplechase fall in Oregon

Martin Rickett’s image captures Germany’s Lea Meyer falling headfirst into the water while competing in the steeplechase at the World Athletics Championships Oregon22.