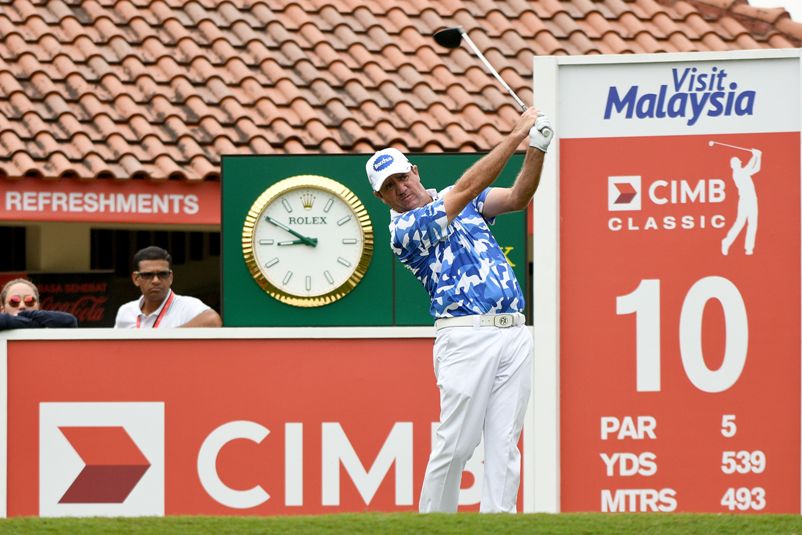 Asian Tour Order of Merit leader Scott Hend recovered from illness to shoot a superb nine-under-par 63 in the third round of the US$7 million CIMB Classic on Saturday.

The big-hitting Australian, who has been shaking off the effects of food poisoning since last week, fired nine birdies for the low round of the day at TPC Kuala Lumpur to jump to tied 17th place on 10-under-par 206. He trails the leader Anirban Lahiri of India by nine shots.

Miguel Tabuena of the Philippines, who played with Major winner and Asian Tour honorary member Ernie Els, produced a fine 66 which included two eagles to sit in 28th place on 209.

Jeunghun Wang of Korea was a further shot back at the prestigious event sanctioned by the Asian Tour and PGA Tour.

Following disappointing rounds of 74 and 69, Hend, a nine-time Asian Tour champion, returned to top form to move up 37 rungs on the leaderboard.

“I’m getting over the food poisoning from last week. My body is starting to feel good and I’m starting to feel strong in my swing again. I’m actually swinging the golf club like I know I can which is quite nice,” said Hend.

“I was just trying to catch up and go off the first tee. That was my goal instead of teeing off on 10. I felt a long stronger and I felt a lot better. It is just a shame it has come a little late in the week,” he added.

With Lahiri, who is ranked ninth on the Order of Merit, leading in the CIMB Classic, the race for the Order of Merit crown could be thrown wide open pending the final result on Sunday. A cool US$1.26 million winner’s cheque is on offer.

“If Anirban wins, there’s no chance. I’ve just got to try to secure second spot. I need to try and get as many Official World Golf Ranking points here. I can’t control what Anirban is doing. He’s playing great golf this week and if he wins, it is a fantastic effort,” said Hend.

The 22-year-old Tabuena bounced back from an early double bogey by firing two eagles to haul himself up the leaderboard after cards of 73 and 69 previously. He said playing with Els was an experience to cherish.

“I have a tendency to pressure myself a bit too much in the bigger events but I told myself starting yesterday and today to treat it like any other event you play in. I know I’m playing well and it is just a matter of timing and good breaks,” he said.

“Playing with Ernie is one of the best experiences I’ve had on the golf course. He is such a nice and down-to-earth guy. You can see why he is a multiple Major champion and hopefully I can have half the success he’s had in his career.

“We talked a lot actually about my game, management and my schedule next year. I made a new friend today,” said Tabuena.