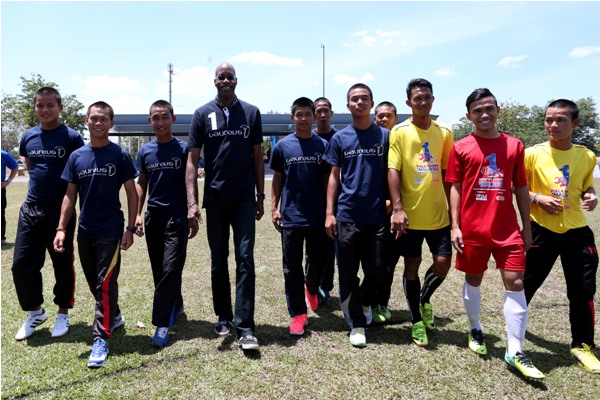 OLYMPIC legend and Laureus World Sports Academy Chairman Edwin Moses has announced an innovative tie-up between Laureus and Malaysian charity Yayasan Rakyat 1Malaysia (YR1M) to benefit young people in Malaysia through the use of sport.

Moses made the announcement at the opening day of the finals of the   football tournament in Kuala Lumpur, supported by YR1M, where he was guest of honour.

He pledged that the global Laureus Sport for Good Foundation, which currently supports more than 140 sports-based community projects in 34 countries, would develop programmes in Malaysia in collaboration with YR1M to deliver an ongoing legacy for the country, after the Laureus World Sports Awards, which are to be staged on March 26 in Kuala Lumpur.

YR1M is the corporate social responsibility partner of the Laureus World Sports Awards and will benefit from the vast reservoir of knowledge and experience in sport for development that Laureus can bring after 15 years of humanitarian activities, which have helped to improve the lives of young people all over the world.

Edwin Moses said: “I have been in Kuala Lumpur for three days now and been totally excited with everything I have seen. I know that the Laureus World Sports Awards next month will be one of the best ever, but Laureus is not just about the Awards. Our first Patron, the great President Mandela, told us ‘Sport has the power to change the world.  It has the power to inspire.  It has the power to unite people in a way that little else does’.