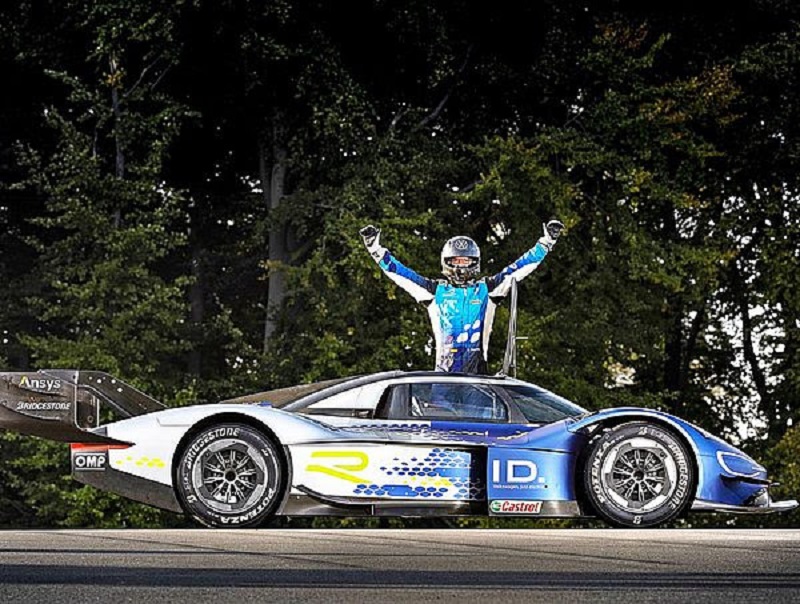 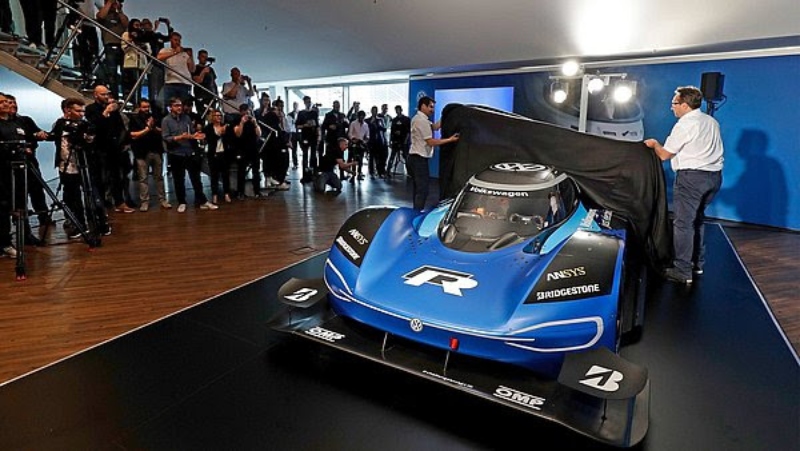 Successful test day with the ID.R in preparation for Goodwood SpeedWeek

ID. family’s racing and production cars take to the racetrack together

for the first time

The Volkswagen ID.R is back with a bang. Just over a year after the record drive on Tianmen Mountain in China, Volkswagen Motorsport and the fully-electric race car returned to action with an impressive track record at Bilster Berg. During a day of performance-oriented testing in preparation for Goodwood SpeedWeek (16.-18.10.2020), Dieter Depping (D) completed a lap of the 4.2-kilometre circuit in a time of 1:24.206 minutes.

The Volkswagen test and development driver bettered the previous record, which was set in 2016 (Sven Barth, Step-1 MiKar C201B prototype, 1:33.27 minutes) by more than nine seconds. This was the ID.R’s sixth record and perfect preparation for the car’s outing at SpeedWeek in roughly three weeks’ time.

The test also provided the stage for a premiere: the ID.R and the ID.31 took to the track together for the first time. The ID.3 is the first production model from Volkswagen’s range of fully-electric vehicles. Delivery of the ID.3 1st, production of which was limited to 30,000, started this month and the car will also be present at Goodwood SpeedWeek.

“It was fantastic to finally see the ID.R back on the track after such a long time,” said Volkswagen Motorsport Director Sven Smeets. “It was an intensive and hugely successful test day at Bilster Berg and once again showed just what the ID.R and electromobility made by Volkswagen are capable of. For us, the focus of the test was clearly on development and set-up work. I am particularly pleased for Dieter Depping that we came away with a track record. The outstanding work he has done for Volkswagen Motorsport for many years has been invaluable. Every one of our successful motorsport project has benefitted from a wealth of valuable input from Dieter. Without him, the many records we have set with the ID.R would not have been possible.”

Volkswagen Motorsport split the test day at Bilster Berg into two sessions. Regular driver Romain Dumas (F) drove the ID.R in the morning, before Depping took over at the wheel of the 500-kW (680 PS) electric car in the afternoon. Thanks to the data and knowledge gained over the course of the day, the lap times improved consistently. By midday, the car had already broken the four-year-old record for the circuit, which features inclines of up to 21 percent and a drop of up to 26 percent.

However, the Volkswagen Motorsport team continued to fine-tune the set-up. And so it was that Depping set the fastest time of all on the final lap of the day. The 54-year-old German was surprised to receive a standing ovation from the team as he climbed out of the car. “That is obviously a great success for the ID.R and for me personally,” said the three-time German rally champion.

“Bilster Berg is a very special racetrack. It is almost like a mini Nordschleife: very varied and with a lot of blind corners. Everything has to come together if you want to be fast: car, set-up and racing line. That is why I am so delighted with this record.”

“It was a very special occasion for us to welcome Volkswagen and the electric ID.R, as it underlines the fact that Bilster Berg is superbly suited to testing the very latest automobiles – including prototypes with the technology of tomorrow.”

Depping has been a test and development driver for Volkswagen for 18 years, during which time he has tested a wide range of race and rally cars – whether powered by petrol, diesel, natural gas or electricity.

Dumas reverently refers to Depping as “my driver”, as the German has completed more kilometres in the ID.R than any other person. In doing so, Depping has been instrumental in record-breaking runs like those on Pikes Peak, the Nürburgring-Nordschleife, and in Goodwood.

ID.R and ID.3 take to the track together for the first time

As well as the ID.R, the focus was on another Volkswagen car at the test day in Ostwestfalen-Lippe: the ID.3. For the first time, both members of the ID. family went for a spin together. Volkswagen Motorsport first lined up with the ID.R – the technological forerunner and sporting spearhead of this completely new generation of electric cars – in 2018, in order to demonstrate the huge potential of the electric drivetrain around the world.

The ID.3, Volkswagen’s first fully-electric production model, has been available to order in dealerships since 20 July. Delivery of the ID.3 1st, which is limited to 30,000 cars, began in September. Far over 25,000 have already been sold in Europe.

The ID.3 was followed by the brand’s first fully-electric SUV, the ID.42, which had its world premiere on yesterday’s 23 September. This sees Volkswagen underline its ambition to become the global leader in electromobility. By 2025, the manufacturer expects to have produced 1.5 million e-cars.