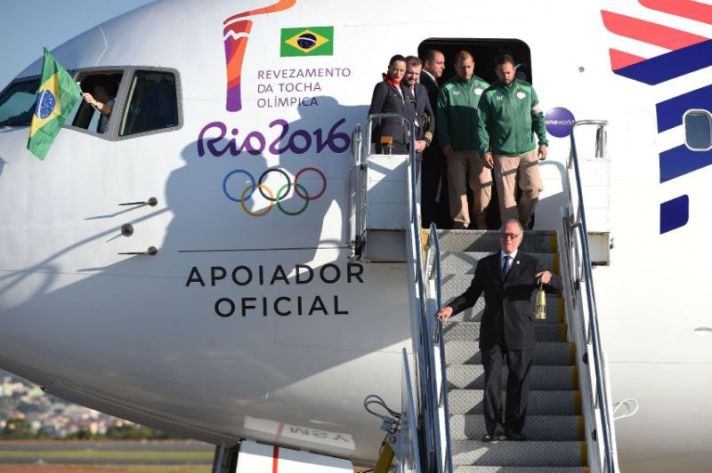 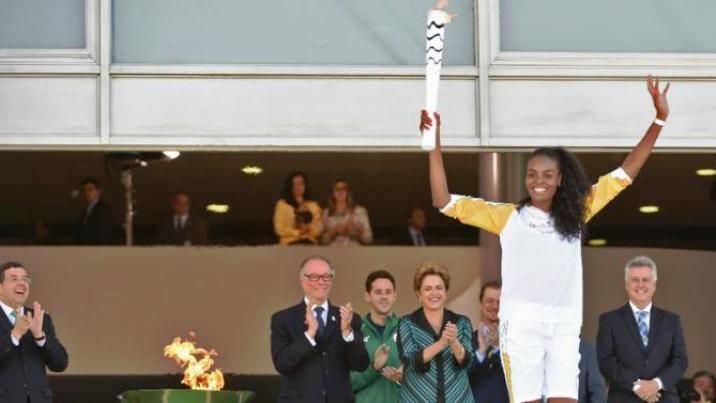 Embattled President Dilma Rousseff greeted the Olympic flame in Brazil on Tuesday, promising not to allow a raging political crisis, in which she could be suspended within days, to ruin the Rio Games.

“We are experiencing political instability. We are going through a very difficult period, truly critical in the country’s history and in the history of democracy,” Rousseff said in the capital Brasilia.

However, “Brazil will provide the very best reception for athletes and foreign visitors because we have created the conditions for this.”

The flame, which arrived in a small lantern from the ancient Greek site of Olympia via Switzerland, was transferred to Brazil’s Olympic torch featuring waves of tropical colors. The torch will now be carried in a relay by 12,000 people, finally ending in Rio’s Maracana stadium on August 5 for the opening ceremony.

Air Force jets roared overhead in a clear blue sky to write “Rio 2016” and the five Olympic rings in their vapor trails. Then there were cheers as the first relay runner, double Olympic gold winning women’s volleyball captain Fabiana Claudino, set off.

But the ceremony was bitter sweet for Rousseff, who could be suspended by the Senate next week at the opening of an impeachment trial. She is accused of illegally manipulating government accounts but says she is the victim of a coup mounted by her vice president, Michel Temer.

In a brief speech at the torch lighting ceremony, Rousseff said the torch relay would put Brazil’s beauty on display, but she also laced her comments with guarded references to her fight for political survival.

“I am certain that a country whose people know how to fight for their rights and to protect their democracy is a country where the Olympics will have great success in the coming months,” she said.

The president, 68, will meanwhile be counting down the days until next week.

On May 11 or 12, the Senate is expected to vote to open an impeachment trial against Rousseff over allegations that she illegally manipulated government accounts. She would be automatically suspended from office, with Temer taking over.

The end of the trial and a definitive Senate vote on Rousseff’s fate could take months more. If she is not cleared, Temer would stay in power until the next scheduled elections in 2018.

Rousseff has vowed to “fight to the end.”

If suspended, she will hunker down at the presidential residence on half pay for up to six months.

From there, she will attempt to persuade senators that the accounting tricks she is accused of do not amount to an impeachable offense.

She is accused of dressing the books to cover up the depth of Brazil’s economic crisis. But she says the impeachment drive is a political, not legal assault.

Given the political makeup of the Senate, a vote to suspend her looks almost certain, although the final outcome is harder to predict.

Rousseff, a one-time Marxist guerrilla who was tortured by the military dictatorship in the 1970s, has all but lost ability to govern in recent months.

However, her Workers’ Party, which has dominated and transformed the country since 2003, is still fighting to prevent impeachment from turning into a nationwide shift to the right.

Polls show he would be a frontrunner, trouncing the unpopular Temer. – Agence France-Presse