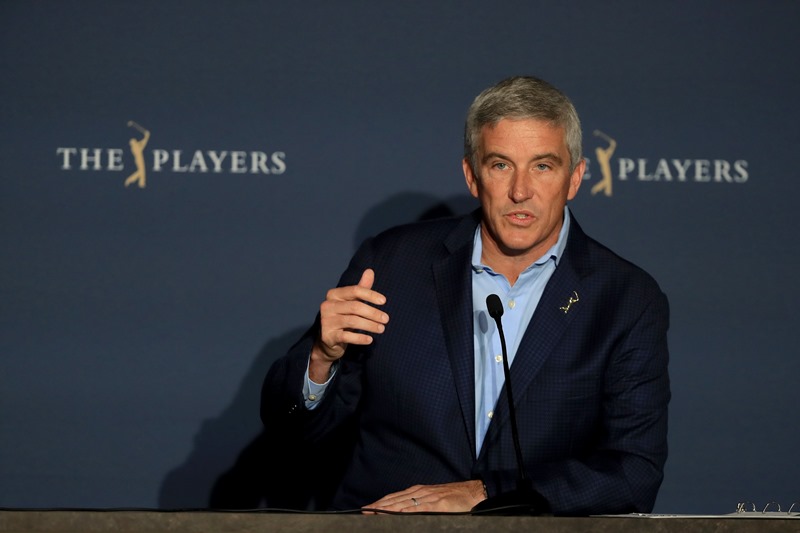 The PGA TOUR’s 91-day hiatus since The PLAYERS CHAMPIONSHIP was canceled—the longest unscheduled break from competition since World War II—will finally end this Thursday when play resumes at the Charles Schwab Challenge.

As one of the first sports to get underway since the Covid-19 pandemic, golf is prepared take center stage in Fort Worth, Texas, where current FedExCup No. 1 Sungjae Im will lead a stellar field which includes the top-five players in the world and 16 of the top 20.

PGA TOUR Commissioner Jay Monahan is well aware of what’s at stake. “I think at this point you have a wide range of emotions. But the most important one, or the most prevalent one for me, is that I’m excited,” he said.

“I know our players are excited. I know everybody that’s been a part of this process is excited to stand our game back up in such a strong way this week at the Charles Schwab Challenge, with a field that features the top five players in the world and more than 100 PGA TOUR winners coming back to a place that we’ve played consecutively annually since 1946 at Colonial Country Club. I’m excited. To that point, it’s hard to believe it will have been 91 days since we last played, but I’m really proud of the effort that everybody has undertaken to get us back there”

Preparation is already well underway at Colonial Country Club, where Sanford Health lab technicians have set up traveling mobile testing units that deliver results in a matter of hours. This partnership, Monahan said, should greatly assist the PGA TOUR in its safe and responsible return to play.

“We were really looking at this from two standpoints,” Monahan said. “How do we apply our testing program that allows our players to prepare to compete and not have to wait for an extended period of time? And at the same time, how do we do so in a way that does not take away from the resources that are needed for the communities where we play?

“To be able to have these mobile testing facilities and vans at our tournament this week at Colonial and every week going forward, to arrive and have that test turned around in two to four hours, and for us to be able to purchase all those supplies and provide all those resources, accomplishes both of those goals.”

Even if a player tests positive, the TOUR is confident that proper measures are in place to maintain a safe atmosphere for players and caddies. Players are tested prior to and immediately after their arrival in a tournament city, and once again to use certain areas of the golf course facility.

“What you layer on top of that is social distancing, the fact that we’ve identified ways to keep our players, caddies and all constituents separated from each other, we’re not going to have spectators, we’ve got a pretty extensive sanitization protocol and we’re going to keep that separation all the way through to the hotel and ultimately the charter flights that are going to move our players and caddies to and from events,” he said.

“We feel like we’ve done everything we can to mitigate the possibility that a player, caddie or anybody in our small bubble test positive. But if they do, we’ll come back to that original statement, which is we’ll follow the guidelines of the experts.”

As for the actual competition, Monahan has looked forward to that more perhaps anyone. Not just for the health of the PGA Tour and its players, but for all of the fans worldwide who have craved live sports for the last several months.

“For the game, we’re really proud of what this means for our TOUR and the opportunities for our players and to get back to impacting the communities where we play, “ he said. “As a parent, when you look at kids, they’re restricted from a lot of the normal sports and recreational activities, but golf is open and available and ready to welcome all. We’re really excited about what this point in time, this opportunity means for our game. We’re committed to making a difference there alongside our industry partners.”