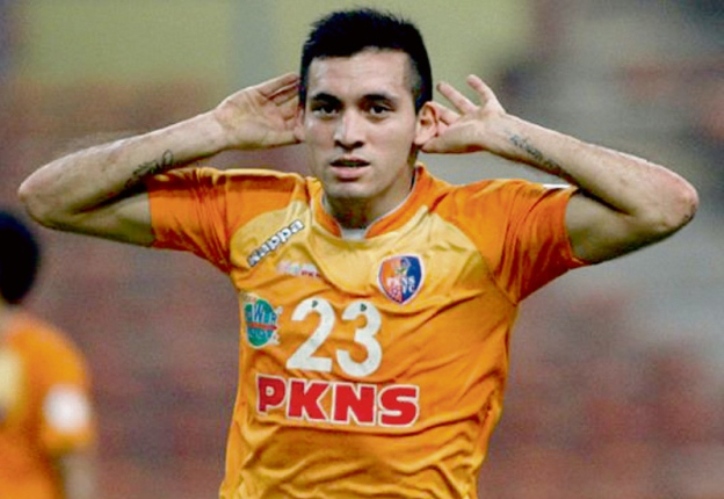 Argentine hitman Gabriel Miguel Guerra has ruffled some feathers in his team PKNS FC – the FA Cup runners-up this year – leaving a big question mark over his future with the Selangor club.

Guerra was seen wearing a rival team’s jersey recently and this pix was uploaded on Instagram and other social media before the league went into a month-long break for Ramadhan (fasting month) and international assignments.

Guerra, a virtually unknown footballer from Latin America is PKNS FC’s top scorer with 13 goals in the 100PLUS Premier League and he also top-scored for the team in this year’s FA Cup with six goals.

His performance in the FA Cup final against Super League outfit Johor Darul Takzim at the Shah Alam Stadium on May 14 was “below par” in the 2-1 defeat to the Southern Tigers.

PKNS head coach E. Elavarasan is not willing to say much on the matter and is leaving it to the club’s management to decide on Guerra’s future with the team.

Whether Guerra plays in the coming Malaysia Cup competition is left to be seen. The Red Ants – as PKNS are known – are drawn in Group C together with two-time Super League winners and AFC Cup winners, Felda United, Terenggganu and Negri Sembilan.

PKNS face JDT at the Larkin Stadium in Johor Bahru on July 12 in their opening Malaysia Cup match.

It is learnt that Guerra has created disharmony in the team and even his close friends are upset with the “mess” he has created and  questioned his professionalism and loyalty.

Guerra was missing on the first day when PKNS reported back for training on June 7 after a two week break. He has since resumed training with the team.

I will not say much on the matter. Let the management handle this. My duty is to coach and pick the team according to our match strategies, depending on who our opponents are,” said Elavarasan.

“He (Guerra) was a nobody and totally unknown. We groomed him into what he is today. He should be more professional.”