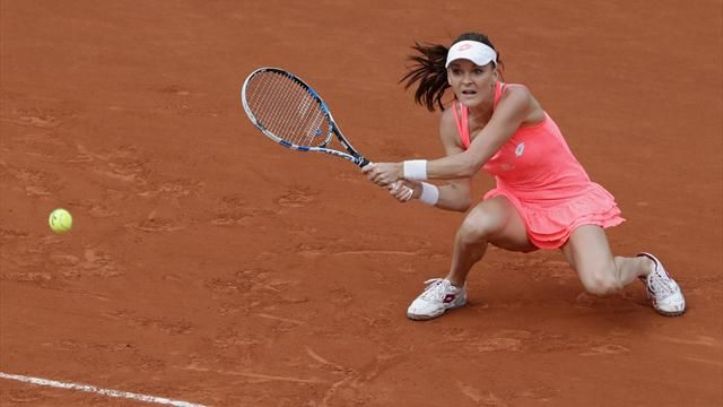 Radwanska, the second seed, and sixth seed Halep both lost their last-16 clashes after opening healthy leads on Sunday night.

But after Monday was washed out, they were forced back out at a damp, chilly Roland Garros on Tuesday despite the rain never really relenting in the two hours of stop-start action available.

Radwanska had been 6-2, 3-0 up on Sunday night but lost 10 games in succession on Tuesday.

“How can you allow players to play in the rain?,” said the former Wimbledon runner-up after her loss on Court Suzanne Lenglen.

“I don’t think they really care what we think. I think they care about other things.”

Halep, beaten in the 2014 final by Maria Sharapova, suffered a 7-6 (7/0), 6-3 defeat to former US Open champion Samantha Stosur of Australia.

The Romanian had been 5-3 up when their contest was suspended on Sunday.

“I have no words. To play tennis matches during the rain I think it’s a bit too much,” said the Romanian after her loss on Court One.

“The court was not good. The balls were completely wet. I didn’t feel safe. No-one cares about the players.”

They were the only two matches completed on Tuesday after the tournament had suffered its first complete washout in 16 years on Monday.

Top seed and world number one Djokovic was 3-6, 6-4, 4-1 ahead of Spain’s 14th seed Roberto Bautista Agut on Court Philippe Chatrier in his last-16 clash.

Their match had been played in two spells between the rain with the first halted after 37 minutes with the top seed having dropped the opening set.

Djokovic, seeking a first Roland Garros title to complete the career Grand Slam, faces the prospect of playing on four consecutive days to complete the fourth round, quarter-final and semi-final.

The Serb had already dropped serve five times against a man he has defeated four times in four outings.

The rain forced the scheduled quarter-finals between Andy Murray, the second seed, and Richard Gasquet and defending champion Stan Wawrinka’s clash against Albert Ramos-Vinolas back to Wednesday.

Three other men’s last-16 ties — David Ferrer against Tomas Berdych, the clash between David Goffin and Ernests Gulbis as well as Marcel Granollers’ duel with Dominic Thiem — were also to be completed.

In the women’s singles, four last-16 ties had yet to start.

Serena is chasing an Open era record-equalling 22nd Grand Slam title but could also face playing over four days as the women’s final is scheduled for Saturday.

Last-16 matches between Venus Williams and Timea Bacsinszky, Carla Suarez Navarro and Yulia Putintseva and the clash featuring Kiki Bertens against Madison Keys were also part of the backlog.

Gulbis led Goffin 3-0 in the first set on Court One when play was eventually halted but not before Goffin had complained over the conditions which he claimed were too dangerous.

Gulbis, a 2014 semi-finalist, had even picked up his bag and started to walk off in protest before he was summoned back by the chair umpire.

Weather conditions are set to improve on Wednesday which is traditionally the day when the quarter-finals are wrapped up.

A clear day, with play again scheduled to start at 1100 (0900GMT) rather than the traditional 1400 (1200GMT) on the second Wednesday, will be good news for organisers who say they took a two million euro hit after Monday’s deluge.

The men’s final has only been played on the third Monday on two occasions — in 1973 and 2012 when Rafael Nadal defeated Djokovic.

Roland Garros remains the only one of the four Grand Slam tournaments not to have a court with a roof.

Philippe Chatrier court is due to have a roof by 2020 at the earliest. – Agence France-Presse