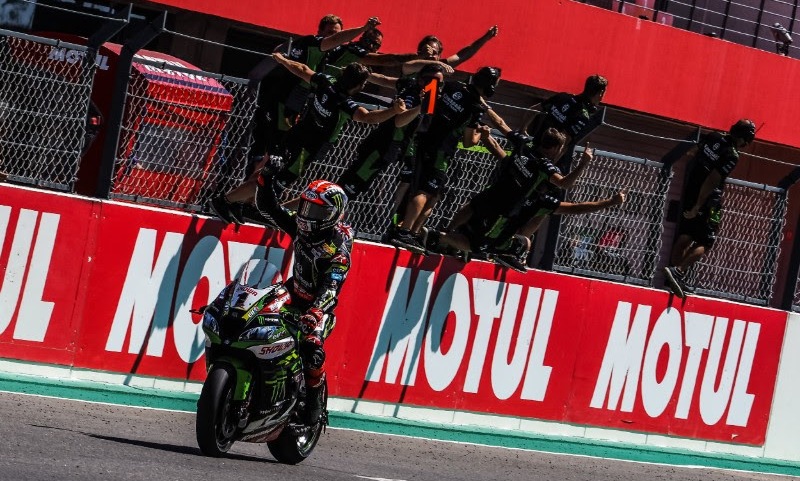 Share
Facebook
Twitter
WhatsApp
Email
Print
P1 – Jonathan Rea (Kawasaki Racing Team WorldSBK)
“The big thank today goes to my team because surely this weekend we made the bike better especially in the hot condition. I worked really hard at the beginning of the race to try and find a gap, then when I got to five seconds I got really nervous so I just tried not to make any mistake and bring the bike home. Thanks to all the support that I got.
I am looking forward to tomorrow. We can try to improve the bike a little bit, especially at the end of the race to make things more comfortable. We achieved our target today”.

“Honestly if you would have told me that I would be on the podium after that qualifying performance, I’d laughed to it. It wasn’t a good qualifying at all and the start it wasn’t brilliant, but then I just went in deep into Turn 1 and then did the same into Turn 3 and made up like eight places and just went forward. That was the strategy, but sometimes you don’t know if it works out that way. Being aggressive it paid off today, and I put myself into that good group earlier on. Otherwise, it would have been a hard race starting from twelfth. I am pleased, and I think my bike was solid, even I struggled just a little bit with the front in the latter laps. But I only had to manage the gap on Michael, and Johnny was too far. Thanks to my team, they worked hard. I think that the most important thing is that we were able to bring here our performance from Laguna. These are two completely different race tracks, and I generally struggled here in the past, but now we got a good result today”.

“I am really happy to be back on the podium. This weekend we have been struggling a lot with the bike, and I have never been happy with it, but today in the race I felt a lot better. I had a nice battle with Chaz, and I thought I could stay with him till the end by I continued to struggle all the way through. Anyway, even if I wasn’t comfortable on the bike I was still able to deliver a podium to my team so I am really pleased with today race”.
#PRTWorldSBK at Autodromo Internacional do Algarve: Race 1
1. Jonathan Rea (Kawasaki Racing Team WorldSBK)
2. Chaz Davies (ARUBA.IT Racing – Ducati) +3.891
3. Michael van der Mark (PATA Yamaha WorldSBK Team) +6.168
Championship Standings after Race 1, Round 10
1.  Jonathan Rea (GBR) Kawasaki (458 points)
2. Alvaro Bautista (ESP) Ducati (365 points)
3. Michael van der Mark (NED) Yamaha (231 points)