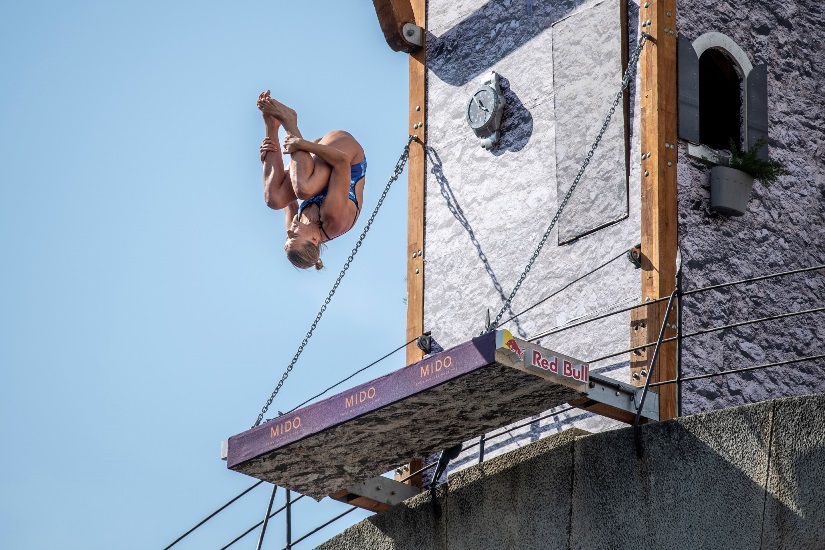 Romania’s Constantin Popovici broke the record for the highest ever competition score as he secured his second victory of the 2022 Red Bull Cliff Diving World Series in Mostar, Bosnia & Herzegovina, while the dominant Rhiannan Iffland of Australia cruised to a fourth
win on the spin in the women’s.

On a weekend of high-quality diving and amid a deluge of 10s from the judges for his rivals, it was 33-year-old Popovici who ultimately stormed to victory at Stari Most.

Despite picking up only one 10 himself across the three days of competition, it was unerring consistency coupled with a high Degree of Difficulty that saw the Romanian beat his compatriot Catalin Preda into second place by a 23-point margin.

His total of 481.5 points also secured the record high score from 27m in a single competition, previously held by Preda.

“Of course, I feel very good right now and the level is growing incredibly. I knew this one
was going to be tough. Mostar is always very strong, it’s mid-season and everybody is
super focused, so I’m glad I was more focused than everyone else and won today,” said
Popovici, whose up and down season reached a new height in this epic and historic setting.

“It can always get better and I’m sure it will. Catalin made a high score in Paris and people
thought this is it, but some thought it might be broken soon and I’m sure mine will also be
broken again.”

Today’s victory, Popovici’s second of the season after Copenhagen, lifts the European High
Diving Champion back into a title fight that had been threatening to leave him behind after a poor showing at the previous stop in Oslo. Preda, whose final dive into the Neretva River
earned him four 10s from the judges and a fourth podium in five stops this year, still leads
the way in the overall standings with 760 points.

Aidan Heslop completed the top three in Mostar and the 20-year-old’s stunning first season
as a permanent diver shows no signs of slowing down. The Brit sits in third place overall
with 646 points, just 34 points behind France’s Gary Hunt, who himself finished in fourth
place here.

Ukraine’s Oleksiy Prygorov, who smashed his previous personal high score with a
performance that would have earned him a first podium at three of this season’s previous
four stops, finished in fifth place in front of 20,000 spectators over the course of three days.

In the women’s competition, it was the season’s top two performers who fought a close
battle all the way to the final round. Five-time champion Rhiannan Iffland has been chased
hard this year by Canada’s Molly Carlson, who had kicked things off with a first victory at
the season opener in Boston.

But the 30-year-old Australian once again used every bit of her experience and composure to nail a typically stunning final dive, picking up a 10 from one of the judges as she stretched away for her fourth win in as many stops.

“I think that second place in Boston gave me a little kick up the butt and it made me driven. This one was really exciting; it was back and forth between myself and Molly the whole event. I knew that with that last dive I had to do something special, and I’m super stoked I pulled it off. Four in a row really sets me up and I’m ready to go into the last rounds of the season,” said Iffland, whose 170-point lead in the overall standings now puts her on the cusp of collecting a sixth King Kahekili trophy.

“Yes, I made the hat-trick. For me it was such a love-hate relationship with diving here and I still do find it quite an intimidating placeto dive. I think I found a way to control those feelings and that’s sometimes the most important thing.”

For Carlson, still only 23, it continues to be a hugely successful first season as a permanent
diver. That’s four podiums – including three runner-up spots – this season and she sits a
comfortable 238 points ahead of third-placed American Eleanor Smart in the overall
standings.

Mostar, the place with the world’s longest high diving tradition, once again stunningly
showcased this ever-growing sport reaching a new level. New talents debuted with never
before done dives, record champions scored 10s from the judges but did not reach the
podium due to an impressive dive quality and an expert crowd that vowed all the 24 cliff
diving athletes.

From Bosnia and Herzegovina, the Red Bull Cliff Diving World Series travels to picturesque
Sisikon in Switzerland to fight for more crucial championship points in the 6th of eight stops in two weeks’ time.