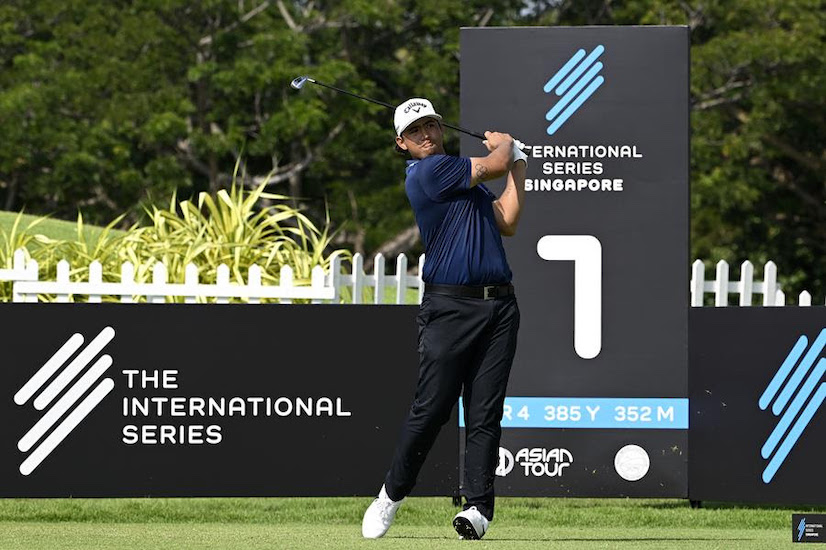 Malaysian ace Gavin Green continued to show he is on the comeback trail again today after spectacularly posting his second-successive bogey-free seven-under-par 65 to take the lead on 14 under at the inaugural US$1.5 million International Series Singapore.

He leads by three from another of the region’s finest young players Phachara Khongwatmai from Thailand, who shot a 66; while India’s Veer Ahlawat and Korean Yoseop Seo are a stroke further behind after they both returned 65s – the latter’s round was highlighted by six birdies on the trot from the seventh.

Overnight leader Scott Vincent from Zimbabwe slipped back after carding a 73 and is seven under in a tie for eighth.

Green, the 2017 Asian Tour Order of Merit champion, has struggled with his game over the past few seasons but appears to be back on track after two brilliant days on the demanding Tampines Course at Tanah Merah Country Club.

“Obviously [ball] striking has to be pretty good on this golf course, you have to keep it in play, you can’t miss too many shots,” said the 28 year old, on another day of searing heat and humidity.

“You have to place your approach shots on certain parts of the green because they are so slopy. And even when you are on the green it’s a tough two putt. My caddie and I have a good game plan. We have worked hard, really hard, over last few weeks.”

Four birdies on the front nine and three on the back saw him break away from the field and revive memories of past performances when he was at his peak.

He added: “It’s a great feeling being back in contention again, it’s a great feeling, it’s just that it is so hot I can’t even think about it. I was counting down the holes, two more holes, one more hole, so hot. I am not thinking about that past, I am not looking at leaderboards, I am just doing my thing.”

Phachara also toured the layout bogey free to put himself in position, like Green, to try and win his second Asian Tour title.

Said the Thai star: “I am very happy with six under today, I had good iron shots but missed couple of putts.  It’s important for me because I have chance to play more LIV events, if I play well this week, and next week, it’s gonna be very good for me. I am really excited to play. I just need to stick to game plan.”

England’s Steve Lewton is nine under, along with Thailand’s Nitithorn Thippong, after holing his approach shot for an eagle on the par-five 18th to return a 68.

“Yeah, I had 91 yards to the flag into a bit of wind,” he said. “I was going to change clubs but didn’t, because I was like, I’ll just fly the ball behind it and hopefully use the slope. And it just came off the slope with a bit of spin and went in, so you need a bit of luck.”

Pre-tournament favourite Patrick Reed bounced back from his opening 73 with a 68 and is three under.

“I just put the ball in position on a lot of holes, especially early on but I didn’t make any putts – just burned the edges and when you are doing that around here it is hard to shoot low,” said the American, the 2018 Masters champion.

“I definitely need to shoot a really low one tomorrow. I feel I’m doing what I’m supposed to from tee to green, but I need to capitalise on a couple of par fives and holes like eight and nine here. And I need the ball to go in with putts.

“I feel like I’m hitting a lot of good putts, my speed was decent today, and yesterday it was actually great, but it is one of those days that instead of the ball going in, it is lipping out and burning edges.

Singapore amateur James Leow, who attends Arizona State University, came in with an impressive 67 to move to three under and lead the local challenge.

Said Leow: “I went out there with the goal of shooting five or six under to make the weekend, and I got a good round going. It’s always nice playing on home soil, in front of family and friends and team-mates and a lot of home local fans as well and obviously playing on a course I have not played before, and it’s been three years since I played here because of COVID; it’s been a lot of fun.”

India’s Aman Raj played the shot of the day, making a hole in one on the par-three 16th – using a wedge from 140 yards. It was a timely shot as he finished right on the cut mark, which was one under, after shooting 71.