Six Nominees for the prestigious Award will be announced on February 11, after a vote by the world’s media. To make that shortlist, Ricciardo and Márquez will be up against some of the most talented newcomers in world sport, including FIFA World Cup leading scorer James Rodriguez, Chinese swimmer Shen Duo, the most successful athlete in the Youth Olympic Games, and American golf prodigy Lucy Li, at 11, the youngest player ever to qualify for the US Women’s Open.

Also in the mix could be the Switzerland tennis team, inspired by Roger Federer, which won the Davis Cup for the first time in their history in 2014.

The six Nominees for the Laureus World Breakthrough of the Year Award are voted for by the Laureus Global Media Selection Panel, comprising leading sports editors, sports writers, broadcasters and online journalists from around the world. The eventual winner will then be chosen from that shortlist in a secret ballot by the 47 members of the Laureus World Sports Academy – the living legends of sport honouring the greatest athletes of today.

Among the sportsmen and women who will be hoping to be among the six Nominees for the Laureus Breakthrough of the Year Award are:

Daniel Ricciardo, 25, succeeded fellow Australian Mark Webber at Red Bull and made a significant impact, winning three Grand Prix in his rookie year – Canada, Hungary and Belgium – and finishing ahead of teammate and four-time world champion Sebastian Vettel in the drivers’ championship. Ricciardo was the only other driver to win on the track in a year dominated by Lewis Hamilton and Nico Rosberg.

Spain’s Alex Márquez is the brother of World MotoGP champion Marc Márquez, who won this Award last year. Alex, 18, won the Moto3 world title, the first time in the 66-year history of Grand Prix motor cycle racing that two brothers have been world champions during the same season.

James Rodriguez, 23, won the Golden Boot in the FIFA World Cup as leading scorer with six goals in five matches, despite his team Colombia losing in the quarter-finals. He was the first player to score in all his team’s opening matches since Ronaldo and Rivaldo in 2002 and was named Best Player in the group stages by FIFA. One of the two goals he scored against Uruguay in the round of the last 16 was voted the best in the tournament by four million on the FIFA website.

Also in football Mario Götze scored the winning goal for Germany against Argentina in the FIFA World Cup Final. At 22 he was the youngest goalscorer in a World Cup final since 1966.

With six gold medals, China’s Shen Duo, 17, was the most successful athlete in the Youth Olympic Games. Her spectacular performance in the pool was one of the highlights of the Games as she won the 100 and 200 metres freestyle, plus four freestyle and medley relays. Later in the year she won four more gold medals at the Asian Games, where she was swimming against older competitors.

When Roger Federer defeated Richard Gasquet of France 6-4 6-2 6-2, in front of a record 27,448 crowd in Lille, it ensured the first ever Davis Cup win for his country. The Switzerland Davis Cup Team had played and lost one previous final in 1992 when Federer was 11. Now 33, he said: “This is not for me, I have won enough. I am just happy we can give everyone in our country a historic moment.”

Another Swiss tennis player, Belinda Bencic, was voted WTA Newcomer of the Year, at 17, after finishing 33rd in the world rankings. Her highlight was beating world No.7 Angelique Kerber and ninth seed Jelena Jankovic en route to becoming the youngest US Open quarter-finalist since Martina Hingis in 1997.

Also in tennis, Croatia’s Marin Cilic won his first Grand Slam, at the US Open, beating world No.3 Roger Federer in straight sets in the semi-final and tenth seed Kei Nishikori in the final, while China’s Xu Shilin, at 16, won the women’s singles gold medal in the Youth Olympics. With the retirement of Li Na, Xu is already being talked of as the next great Chinese tennis player.

American Lucy Li became the youngest golfer ever to qualify for the US Women’s Open – although not the youngest to play. She was 11 years, 8 months, 19 days on the opening day. With a handicap of 1.5, she was able to attempt qualification despite her age and shot 74 and 68 at Half Moon Bay in California. In the championship itself at Pinehurst No.2 she scored 78, 78 and missed the cut. Also in golf, American Lexi Thompson became the second youngest winner of a Major Championship, when she won the Kraft Nabisco at 19 years, 1 month, 27 days.

American Mikaela Shiffrin, at 18 years and 345 days, became the youngest ever Olympic Slalom champion, in Sochi. During the year she also won at Levi, Bormio, Flachau, Are and Lenzerheide to win her second straight Slalom World Cup. She is the current Olympic, world and World Cup slalom champion.

Despite playing in a struggling Philadelphia 76ers team, with a losing 19-63 record, point guard Michael Carter-Williams was named NBA Rookie of Year, winning 56 of the 58 media votes. He is one of only three players in NBA history to average 16 points, 6 rebounds and 6 assists in a rookie season, the others being Oscar Robertson and Magic Johnson.

The tiny Pacific coral island of Kiribati, population 100,000, had never won a global sports medal until weightlifter David Katoatau won the 105kg Commonwealth Games gold medal in Glasgow. The 30-year-old was forced to live away from his Pacific home for four years in order to compete to achieve his dream.

China’s Fan Zhendong won the men’s singles and mixed team table tennis gold medals in the Youth Olympic Games. IOC President Thomas Bach was so impressed he promised Fan that if he wins gold in Rio de Janeiro in 2016 he will personally present the gold medal to him. Fan wrote his name in the record books in 2013 when he became the youngest champion on the World Tour, winning the Polish Open at 16.

British sprinter Adam Gemili, 20, won the 200 metres and 4 x 100m relay gold in the European Championship. He is the first Briton to break 20 seconds twice. 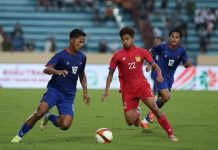