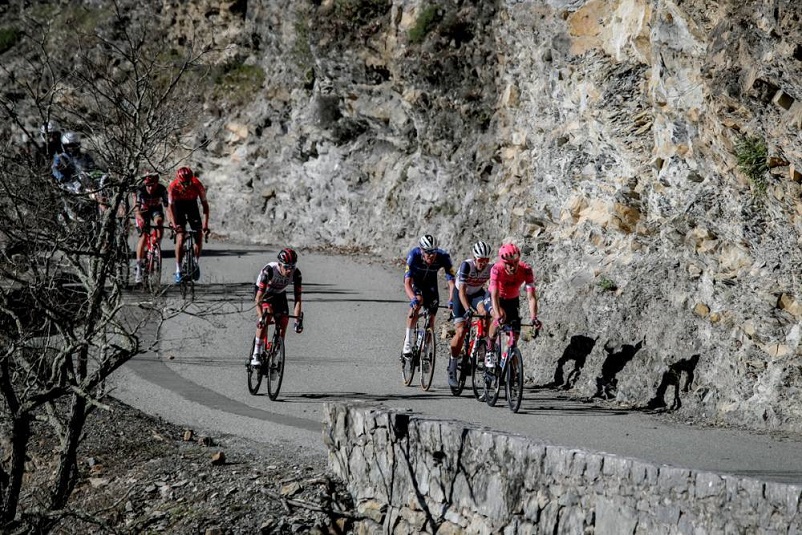 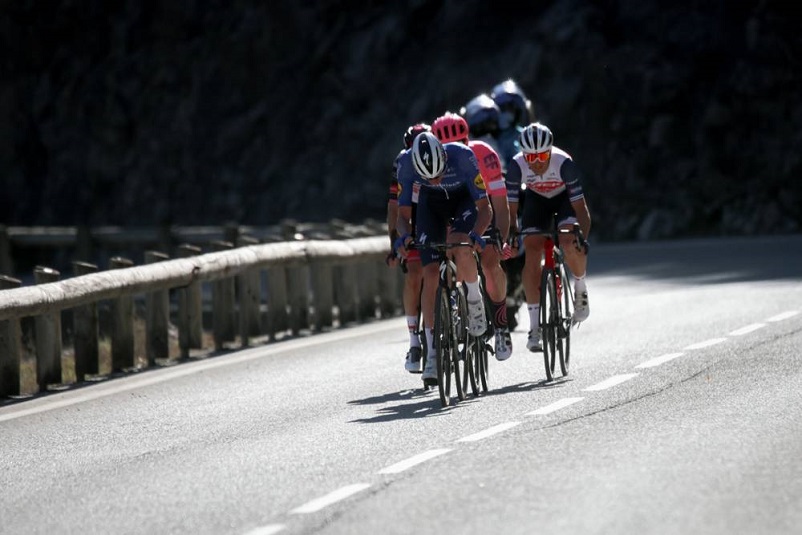 Germany’s Maximilian Schachmann (Bora-Hansgrohe) retained his Paris-Nice crown after one of the most sensational finales of the Race to the Sun, which saw runaway race leader Primoz Roglic crash, falter and finally lose a crown which seemed within almost certain reach. The Slovenian hit the tarmac after 22 km, was halted again with 25 km to go and never managed to return into a pack speeding to get rid of him once and for all.

Roglic, winner of three stages in this edition, crossed the line 3:08 behind Schachmann and finished 15th overall with the slim consolation of a green jersey. In the final GC, the German leads white jersey winner Aleksandr Vlasov (Astana) by 19 seconds and his Astana team-mate Ion Izagirre by 23 seconds.

The real start was given to 136 riders at 14:31. Giacomo Nizzolo (Qhubeka) did not start. Several attempts took place early on, Julien Bernard (Trek-Segafredo) being the most active as the peloton was tackling the first ascent of Cote de Duranus.  Dylan Van Baarle (Ineos-Grenadiers) was first at the top ahead of Dylan Teuns (Bahrain), Sergio Henao (Qhubeka-Assos) and Quentin Pacher (B&B Hotels).

The four were joined by Dorian Godon  (Ag2R-Citroen) and Louis Meintjes (Intermarché) in the descent. But the six were caught by the bunch shortly before the first bonus sprint of the day, won by Aurélien Paret-Peintre (Ag2R-Citroen).

Several crashes took place in a nervous peloton, starting with David Gaudu (Groupama-FDJ), who was forced out of the race, until race leader Primoz Roglic hit the tarmac in turn at kilometre 22 and was brought back into the peloton, who relaxed after the incident. The Slovenian was back in the pack with his shorts torn apart and bruises on his legs. On the flat (km 32), Tim De Clercq (Deceuninck-Quick Step), Jonas Rutsch (EF-Nippo), Edward Theuns (Trek-Segafredo) and Sven Bystrom (UAE) parted with the peloton. They were chased by stage 2 winner Cees Bol (DSM), Stefano Oldani (Lotto), Warren Barguil (Arkea-Samsic) and Johan Jacobs (Movistar), who was finally dropped. At km 45, the Barguil trio joined the leading four and seven men tackled the second ascent in the front.

Eight in the lead

Laurens De plus (Ineos Grenadiers) later joined the breakaway group before the second ascent of Cote de Duranus, led by Barguil, ahead of Theuns and Bystrom. The gap increased in that second climb as the pack seemed intent on avoiding further crashes, to the exception of 2009 Paris-Nice winner Luis Leon Sanchez, who repeatedly attempted to go behind the break.

With 25 km to go, Roglic suffered a mechanical and found himself dropped by the peloton. Schachmann’s Bora-Hansgrohe and Astana led the pack at full speed to drop the yellow jersey holder while George Bennett and Steven Kruijswijk tried vainly to bring him back. The Slovenian gradually lost ground as the final victory was eluding him with each kilometre.

At the front, Barguil, Bernard, Bystrom and Rutsch went but were quickly reined in by the speeding peloton, in which Schachmann was getting closer to a second win in the Race to the Sun. With 15 kilometres to go, Roglic had lost his 52-seconds lead over the German. At the finish – and after nearly crashing again with 5 km to go – Roglic lost more than three minutes.

In the last 3 km, Gino Mader (Bahrain), who had narrowly lost to Roglic in La Colmiane, tried his luck again with Guillaume Martin (Cofidis) and Krists Neilands (Israel Start-Up Nation) but the pack regrouped. In the final sprint, Magnus Cort Nielsen was the most cunning and he attacked before the last corner to upstage Frenchman Christophe Laporte (Cofidis) on the line. It was the Dane’s second stage win on the Race to the Sun after the one earned in 2019. France’s Anthony Perez (Cofidis) retained his polka-dot jersey. – www.paris-nice.fr