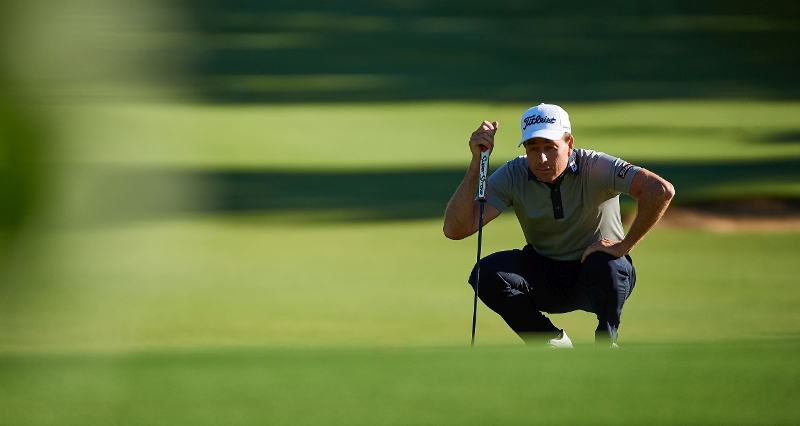 Brett Rumford of Australia opened with blistering eight-under-par 64 to lead by two shots at the ISPS HANDA World Super 6 Perth on Thursday.

The defending champion continued his tournament-winning form at Lake Karrinyup Country Club, carding seven birdies before making the turn at the 18th hole. He made bogeys at the first and third holes, but recovered with three more birdies before ending his round.

Lee Westwood of England, who was playing in the same group as Rumford, kept the leader in his sights at the A$1.75 million (approximately US$1.25 million) event. He carded one eagle, five birdies and a lone bogey for a 66 to grab a share of second place with Australia’s James Nitties.

Fung’s putting has plagued his game recently but it was on point in the opening round of the ISPS HANDA World Super 6 Perth. He only took 24 putts while scoring seven birdies against two bogeys.

Kiradech flew into Perth the evening prior to the tournament and did commendably well despite not being able to practice. He started the round with five birdies in his first six holes and he was able to bounce back immediately after every bogey.

Prom attributed his bogey-free round to the favourable wind condition and his sound course management. He missed only two fairways and three greens the entire round, which was highlighted by five birdies scored on the first, fourth, ninth, 11th and 13th.

Zandar Lombard made an albatross at the par-five 15th hole with a 2-iron from 210 yards. This is the 26th albatross on the Asian Tour and the second this year.

I got off to another fast start.  I think ‘Beef’ threw the first punch with a two at the first hole (the flight started at hole 10). I guess we just fed off each other from there.  Lee was playing great golf like he normally does, and the greens were rolling nicely. So, if you got the ball on line rolling, you’ll probably hole it as there is no deviation to the greens.

Outside of my bogeys (at 1st and 3rd), I just had to tell myself that I’m playing good golf and just stay patient with it, as there will be plenty of birdies coming in.

When your playing partners are playing well, you just feed off one another.  Plus, it was fairly scorable out there. The winds weren’t as strong as they were the last few afternoons that I’ve been out here playing.

I don’t know what it is, but definitely seems to be some kind of home course advantage, isn’t it? I’m leading, I’m inside the top 24 and that’s my only focus this week.

Yeah, I played very nicely, very solidly. I hit a lot of good shots, drove the ball well, putted nicely as well without anything really going in for me.  I chipped in on 15thfor eagle, but other than that everything was pretty close range.  The greens obviously take a bit of getting used to and learning.  But it’s part of the job and I managed that, and like I say, six-under-par is a good start to the tournament.

66 is my best opening of the season. But, the season is only four tournaments in.  I started the first couple of events slowly. Last week I played a lot better, shooting 62 the second round. The swing’s just getting better all the time.  It’s just unfortunate I’ve got a long period of time off after this through different circumstances, and I should be working on the game and my fitness over the few weeks after this tournament.

It was nice to shoot 66.  I don’t think this is a tournament where you want to be playing catch up really.  You want to get yourself in the mix and try and cruise through the second and third days and get into that top 24.

I’m very happy with my round today. This is my third time playing here at the Karrinyup Country Club. The conditions are beautiful and playing in the morning, it was less breezy. That probably helped me shoot a low score. It’s a great start for me.

When I was here two days ago, the greens were pretty wet, but the groundsmen managed to dry it up prior to the tournament.

I’ve been striking the ball well. Putting’s my problem, but today, it seems that it is working. Which is why I made seven birdies today.

Yeah, I got a really decent start, five birdies in the first six holes, which surprised me a little bit. I didn’t know the course, but I really enjoy it. I love seeing kangaroos on the golf course.

I just try to bombs, but you know, Lucas (Herbert) is one of the best players in Australia and he hit it miles.  I force myself to hit hard as I can, but I still can’t as far as the kid.

I caught the Super 6 last year and it looks like great fun. It gives an opportunity for any player who made top 24 to win. I was excited when I knew that I’m getting in this week. I was trying force my manager to get a visa and I flew as early as I could to join this event. I have to thank all the organizer and sponsor for the invitation.

I’m very happy to finish the round five-under-par today. I played solid and didn’t make any mistake. But, this golf course, the pins are placed next to the bunker. So, if you miss it on the wrong side, it’s going to be very tough.

Everything went well today. I drove well and the wind direction today helped me a bit. At the long holes, it was downwind. That makes it play a bit easier. At the 18th, if you play into the wind, you need a long club to get to the greens. The difference can be as much as five clubs!

The last hole, I hit a great second shot and nearly holed it. There was nothing really special today, actually. I hit fairways and greens and made some good putts.

There is still a lot of golf to play. There’s a different format this week and I’m aiming to get into the top 24. Let’s see how it goes. It’s going to be great fun if I do get to Sunday.

Leading scores after round 1 of the ISPS HANDA WORLD SUPER 6 PERTH being played at the par 72, 7143 Yards Lake Karrinyup GC course (am – denotes amateur):