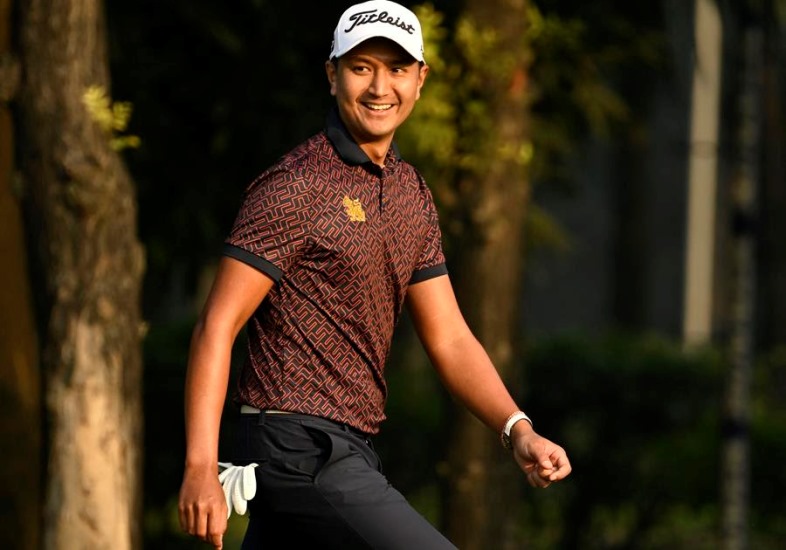 Thailand’s Sadom Kaewkanjana won the Bangabandhu Cup Golf Bangladesh Open when the event it was last played in 2019, here at Kurmitola Golf Club, in Dhaka – incredibly, becoming the fastest Qualifying School graduate to win on Tour, in what was his first start after qualifying – and on the eve of this year’s tournament he says the memories of that breakthrough and nerve-jangling victory are still vivid and will last for a long time.

Starting the final round he led by two shots and was cruising until calamity struck when he made bogeys on 13, 14 and 15. However, he birdied 16 and 17 before making a crucial par-save on the par-four 18th, to beat India’s Ajeetesh Sandhu by one.

“I was so excited. I had hit my tee shot to the left and got behind a tree and had to lay up. I hit my third shot onto the green and made the putt. It made me feel very good.”

He had only turned professional the year before and that victory laid the foundation for incredible run of results which saw him win three times on the All Thailand Golf Tour in the space of three months in 2021, including the Thailand Open, a Trust Mixed golf event in January 2022 before shortly after securing the biggest win of his career so far, the 2022 SMBC Singapore Open – which brought to an end the 2020-21-22 season on the Asian Tour. That victory helped him into second place on the Final Asian Tour Order of Merit.

He said: “I feel very good to be back to play in Bangladesh again, I have a lot of good memories from this course. So I’m excited to play this year.”

This season has seen the 24 year old consistently near the top of the leader boards with a tied-second and two third-place finishes as his best results among his six top-10s. The last Asian Tour event, the International Series Egypt, was no exception and saw Sadom finish in a tie for ninth place, so his game is obviously in good shape.

“I think this year feels amazing for me. I worked hard when we had the COVID break, for two years I worked very hard. After the Tour resumed [at the end of 2021], I started very well in the Asian Tour events in Phuket [he tied second and joint fifth] and that gave me a lot of confidence. I have kept that momentum until today,” he said.

Every professional golfer dreams of playing The Open Championship at St. Andrews, and he had a remarkable experience there on the Old Course in July, when in his first start in this Major he finished tied 11th after a final round 65. The best-ever result by a Thai player at The Open.

Said Sadom: “I felt fantastic to play in The Open. I thought in my life I would never be able to play that course because I had only seen it on TV or on YouTube. But to have the chance to play there, and play so well that week, I was very happy.”

The second place on the 2020/21/22 Merit list also secured the Thai starts in the newly launched LIV Golf Invitational Series, and he has spent much of the second half of the season competing with and against some of the best players in the game, amassing just over US$1.4 million in individual and team earnings.

“I played with Dustin Johnson in Bangkok on the last day, and it was crazy. He hit very good quality shots, every shot.”