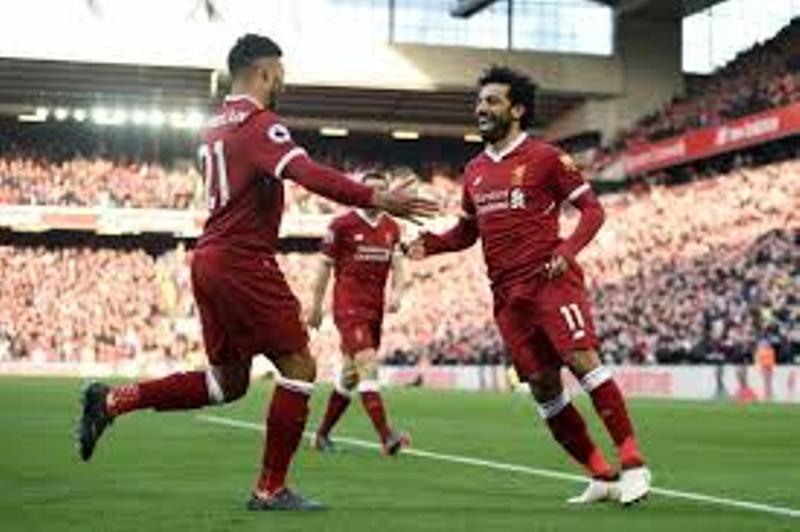 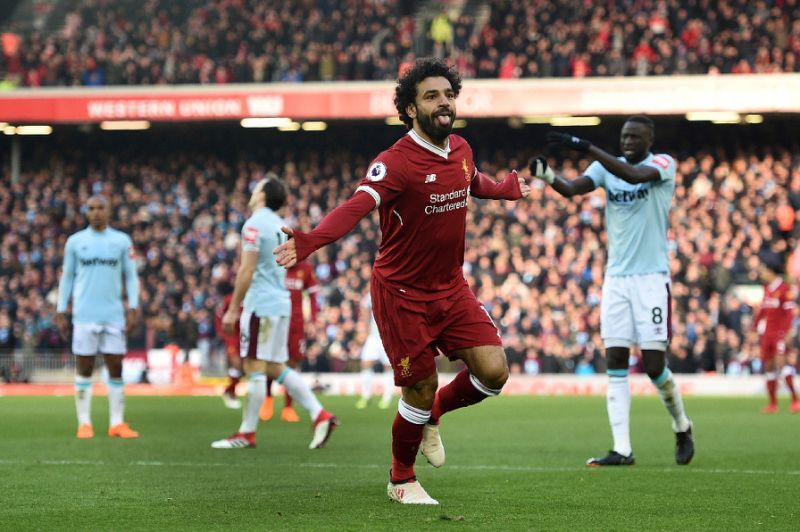 Mohamed Salah scored for the sixth straight game as Liverpool took advantage of being the only Premier League top six side in action on Saturday to move into second with a 4-1 thrashing of West Ham at Anfield.

Jurgen Klopp’s men still trail runaway league leaders Manchester City by 15 points, but strengthened their case to finish in the top four and make the Champions League next season as Emre Can, Roberto Firmino and Sadio Mane were also on target.

Liverpool edge a point ahead of bitter rivals Manchester United, who host fourth-placed Chelsea on Sunday.

Salah also drew level with Harry Kane on 23 Premier League goals in an outstanding debut season at Liverpool in the battle for the golden boot.

The Egyptian was inches away from opening the scoring inside three minutes when he struck the post, but did have a hand when Can’s bullet header from Salah’s corner broke the deadlock on 29 minutes for Liverpool’s 100th goal of the season in all competitions.

Salah doubled Liverpool’s lead when he steered a shot into the far corner on his favoured left foot after the break from Alex Oxlade-Chamberlain’s through ball.

Moments later it was Firmino who beat West Ham goalkeeper Adrian to Can’s pass before slotting into an empty net.

Substitute Michail Antonio pulled a goal back for the Hammers just a minute after coming on, but Mane ensured all of Liverpool’s prolific front three were on target when he converted Andrew Robertson’s cross 13 minutes from time.

At the other end of the table, promoted Huddersfield and Brighton moved clear of the bottom three.

West Brom remain rooted to the foot of the table as Huddersfield struck twice in eight minutes at the start of the second period through Rajiv Van la Parra and Steve Mounie to win 2-1 at the Hawthorns.

Brighton moved up to 11th thanks to Glenn Murray’s double and late goals from Anthony Knockaert and Jurgen Locadia to end Swansea’s 10-match unbeaten run in a 4-1 thrashing.

Dwight Gayle also scored twice, but Newcastle failed to back up their stunning win over Manchester United as they blew a two-goal lead to draw 2-2 at Bournemouth. Adam Smith and Dan Gosling struck for the hosts in the final 10 minutes.

Southampton also salvaged a point late on to edge out the drop zone on goal difference.

Manolo Gabbiadini came off the bench to level in stoppage time and salvage a 1-1 draw at Burnley, whose wait since December 12 for a Premier League win continues.

Earlier, Stoke City boss Paul Lambert hailed Jack Butland as the “best goalkeeper in Britain” despite an own goal from the England international costing his side the chance to move out of the bottom three in a 1-1 draw at Leicester.

The visitors, who remain 19th, led through Xherdan Shaqiri’s long-range strike until Butland fumbled Marc Albrighton’s cross into his own net 20 minutes from time.

But Butland did at least make amends with a stunning save from Riyad Mahrez. Leicester’s Harry Maguire and Matty James also hit the post as Stoke held on to move to within a point of safety. – Agence France-Presse