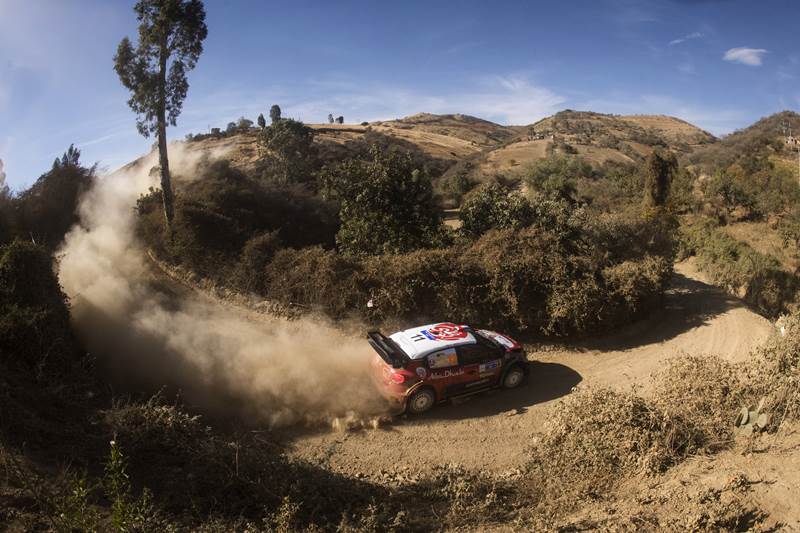 Sébastien Loeb, driving his first WRC rally for more than three years and his first dirt road round since May 2013, turned back the clock to win two Rally Guanajuato Mexico speed tests as he hunted down Dani Sordo on Fridayafternoon.

The 44-year-old Frenchman trailed the Spaniard by almost 18 seconds before consecutive stage victories vaulted him into second place in a Citroën C3, 7.2sec behind. It could have been even more of a fairytale comeback had it not been for an earlier overshoot.

“I didn’t see a junction because I was looking further ahead and I was too late on the brakes,” he said. “It was a very good day for me. I didn’t know what to expect but we’re here and that’s great news.”

Both drivers benefited from a low start position in the sweltering mountain speed tests above León. Those ahead ploughed a line through thick gravel to leave a cleaner and faster surface to exploit.

Sordo took the lead early and won two tests in a Hyundai i20, but was unable to press home his advantage later on after surprisingly choosing to mix soft compound tyres with more favoured hard rubber.

“I think we made a small mistake with the tyres. We were struggling all the time. The traction was okay but the lateral grip was nothing. We took a risk and it’s like this,” the 34-year-old explained.

Ott Tanäk drove around overheating problems in his Toyota Yaris to hold third, 3.8sec behind Loeb. The Estonian held a 14-second advantage over Kris Meeke’s C3, the Ulsterman dropping back with two spins after leading on Friday morning.

Sébastien Ogier limited his losses from second in the start order in fifth place, despite a spin. The Ford Fiesta driver edged ahead of Andreas Mikkelsen, the Norwegian at a loss to explain his lack of pace.

It was a nightmare for championship leader and road opener Thierry Neuville. He fared worst in the conditions and lost more than 20 seconds with a fuel pressure problem in his i20. A power steering issue cost more time and he ended seventh, over two minutes off the lead.

High temperatures and arduous conditions made it a day of attrition. Elfyn Evans rolled out of third and will not restart on Saturday as co-driver Dan Barritt has concussion. Team-mate Teemu Suninen retired after hitting a barrier in his Fiesta.