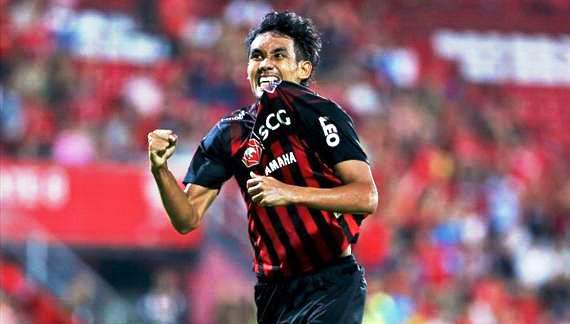 The match will be staged at the 100,000-capacity Gelora Bung Karno Stadium in Senayan, Jakarta on 11 May, with kick off at 2030hrs.

Shahril, who sensationally skippered his team to the AFF Suzuki Cup crown two years ago, will combine forces with the lethal Teerasil, whose exploits include playing stints in the English Premier League and the Australian League.

Teerasil will hook up with several other notable strikers which includes Vietnam’s own Le Cong Vinh, Philippines Ian Bayona Araneta and Laos’ Visay Phaphouvanin. These players are among a 22-strong Asean All-Star squad named for the match.

Coach Datuk K. Rajagobal, who steered the Malaysian team to the 2010 AFF Suzuki Cup and was a nominee for the AFF Awards last year, will handle the All Star team.

“We do not have a lot of time but being professionals I believe the players will all be ready for the match,” said Rajagobal.“This is more of an exhibition match and what’s important is that we put up a good entertaining football for the fans. The bottom-line is that we want to contribute to the victims of Typhoon Haiyan.”

Between the posts, the Asean team will have Singapore’s Hassan Abdullah Sunny and Laos’ SoukthavySoundala.

On the Indonesian side, head coach Alfred Riedl, has named a formidable squad to match the Asean aces.

“The match is very important to us. It is not just another game,” said Alfred. “We are playing against quality players which means they are very capable of playing a very good game and giving us a hard time.”