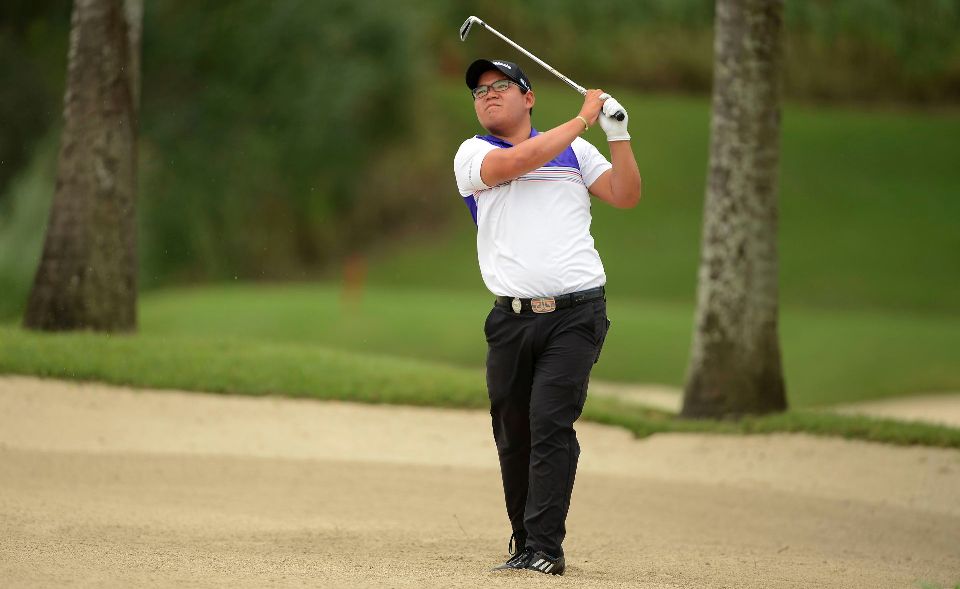 Thailand’s Panuphol Pittayarat put up an opening class act when he fired a sparkling nine-under-par 63 to take the first round lead at The Championship at Laguna National on Thursday.

Singapore’s Quincy Quek kept chase with Panuphol by returning with a 64 to share second place with Scotland’s Scott Jamieson, American-Korean David Lipsky and Korea’s Kim Byung-jun at the US$1.5 million event sanctioned by the Asian Tour and European Tour.

Thailand’s Arnond Vongvanij was left to rue a costly double-bogey five on eight and had to settle for sixth place together with Sri Lanka’s Mithun Perera, Sweden’s Kristoffer Broberg and Chile’s Felipe Aguilar.

After missing the cut in his last three starts on the Asian Tour, Panuphol breathed new life into his season with a flawless 63 that would have been the course record if not for the preferred lie ruling in place this week.

The opening round was delayed by an hour due to lightning and rain in the morning. But when it resumed, Panuphol quickly reached the turn with a brilliant 32.

The Thai, nicknamed ‘Coconut’ by his parents continued to set the scorching pace with another five birdies for an inward 31.

“It was a good day out there. The weather is good and I holed a lot of putts where some of them were really unexpected.

I gave myself lots of chances to score and I’m very happy with how I played today. I didn’t see it coming but it did come and I’m feeling good about my game right now,” said Panuphol.

Quek spearheaded the local charge with a round to remember where he needed only 20 putts to sign for an impressive 64 at the Laguna National Golf and Country Club.

“I could not have started any better. The weather has been very kind to us especially after the rain delay this morning. The course is perfect and the greens are rolling so well. That’s where I picked up most of my birdies on the putting greens.

I holed quite a few long putts. I was just looking at my statistics today. I had 20 putts which I have never get before. It is quite a crazy one for me but we still have three more days to go,” said Quek.

Having won his maiden professional victory on the secondary Asian Development Tour in the Philippines in 2012, the 27-year-old Singaporean is now looking forward to earn his breakthrough on the Asian Tour.

“The putter was working well for me. I gave myself chances by hitting the ball closer than I normally do. Playing well in the first round has definitely put me in a good position going forward,” said Quek.

Arnond was clearly man poised to challenge Panuphol for the lead when he blitzed The Masters Course to reach nine-under with two holes left to play.

The 25-year-old Thai, however paid the price for an unlucky break on the par-three eight when a double-bogey marred his card and forced him to slip two shots back of his compatriot.

“I got an unlucky break on the eighth unfortunately. I dropped two shots there when it should be an easy par. But overall I’m hitting it good and putting well so I will just try and do what I did today and hopefully get a better result tomorrow,” said Arnond.

Lipsky burst into the scene by winning his maiden title in Cambodia after topping the class at the Asian Tour Qualifying School in 2012.

The 25-year-old, who has already enjoyed one top-10 in the Philippines in March, is again showing glimpses of his winning form which he attributed to the friendly rivalry he enjoys with Panuphol.

“I played with Panuphol today and it was good fun even though he beat me by one. I think we just fed off each other. Honestly, we were just trying to beat each other and that was all we were thinking about,” said Lipsky.

“The course is not very long and it’s in soft conditions. The greens are looking good and I think it is important to make birdies this week. I will have to make more birdies in the next three rounds if I want to stay where I am at right now,” added Lipsky.

A total of 18 players will have to return at 7.40am (local time) to complete their first round after play was suspended due to fading light.

Scores after round 1 of the The Championship being played at the par 72, 7071 Yards Laguna National Golf Club (am – denotes amateur):