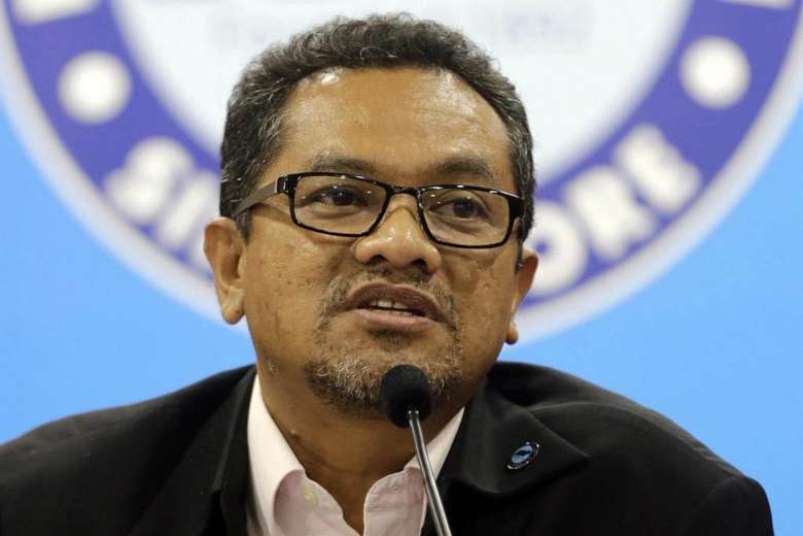 SINGAPORE’S outgoing football boss Zainudin Nordin (above) must have gasped in shock at the start of the Asian Football Confederation’s extraordinary congress in the Indian resort city of Goa.

He was one of six contenders for the Asian elections for three seats on the new FIFA Council. The others are China PR’s Zhang Jian, Islamic Republic of Iran’s Ali Kafashian Naeni, Australia’s Moya Dodd, Bangladesh’s Mahfuza Ahkter and DPR Korea’s Han Un Gyong.

But within 20 minutes of the start of the Congress, the meeting was called off on Tuesday after disgruntled delegates voted down the agenda of the meeting.

Forty two of the 44 members, who had voting rights at the meeting, raised a “No” card when AFC president Shaikh Salman bin Ebrahim Al Khalifa called for the agenda of the meeting to be passed.

AFC insiders say the overwhelming frustration was registered in the protest votes and a major snub for world governing body FIFA, which has sent out a last-gasp ban on Saoud Al-Mohannadi, the highly-influential Vice President of the Qatar Football Association, from the election because of an ongoing corruption investigation

Al-Mohannadi, who denies any wrongdoing, was one of the favourites to win a seat on the new body and had cleared the necessary FIFA integrity check. And the red card shown to him by FIFA was perceived as an “unfair stab in the back”.

“This is not sportsmanship or gamesmanship. This is a most unfair stab in the back,” said a senior AFC leader, who declined to be named. “FIFA should give the right reasons for not allowing Saoud to stand and in this case, when they threw a late ban, we felt we cannot accept it.

“The protest votes shown at the start of the AFC Congress is a clear way we want to let FIFA know to play it fair and square and not to interfere in Asia’s domestic football affairs without giving us justifiable proof for the actions.”

Many felt that FIFA left insufficient time for new candidates to join the six remaining in the field.

“There were a lot of people who hoped to file their own nominations,” said Praful Patel, AFC Vice President and President of the All India Football Federation. “Whether somebody was barred or banned, I wish this process had been done earlier. The others could have also had the opportunity to stand and that’s why it got cancelled.”

AFC President Shaikh Salman bin Ebrahim Al Khalifa looked grim-faced and said: “This is probably the shortest congress I have ever chaired. The message is clear. I declare the AFC congress closed.”

SLAP IN THE FACE

The AFC will now set a new date for another extraordinary congress in consultation with FIFA, AFC secretary general Windsor John said. FIFA had set a September 30 deadline for elections to the Council, which replaces the Executive Committee, under reforms instituted in the wake of the corruption scandal which has engulfed football’s world governing body over the last 16 months.

The abandonment of the meeting, the first-time for a major AFC Congress, is surely a major slap-in-the-face for newly-minted FIFA President Gianni Infantino, who is undertaking a clean-up of FIFA after a series of corruption scandals and bribery allegations plunged the body into crisis. He was also expected to interact with the delegates and release the logo for the 2017 Under-17 World Cup, besides the new logo of the AIFF.

Looking embarrassed, Infantino remarked: “I think it’s democracy and we need to look forwards anyway. There’s still a lot of work ahead.”

For Singapore’s 53-year-old Zainudin, he returns home in a tightrope situation as he hoped to campaign as an “underdog” to seriously raise the voices of the smaller affiliates, particularly those from Asean.

Zainudin, a former Member of Parliament, wanted to spearhead the proposed Asean Super League (ASL) between domestic clubs sides under the AFF umbrella.  In his opinion, the ASL could help local players make the step up to bigger stages and in the wider scheme of things, improve Singapore’s national team.

But he’s aware that even before getting off the starting block, even in getting FIFA approval, there remains very stern opposition in South-east Asia. And this could kill his dream project at its womb-stage.

Among the key opposition is Tunku Ismail Sultan Ibrahim, Crown Prince of Johor and chairman of Malaysian Super League (MSL) club Johor Darul Takzim, who ticked off Zainudin’s idea: “I don’t agree with the ASL. I think we’re (South-east Asian football) still young and we (should) focus on how it is done in Europe. For now, the Asian Champions League is the highest target. The ASL is not really my cup of tea.”

He has no formal post at the FAS as he has made it clear he’s not contesting the upcoming FAS polls. And without the possible FIFA Council Member position and the ASL barely able to start, it looks like the end to the footballing destiny of the outgoing FAS President.