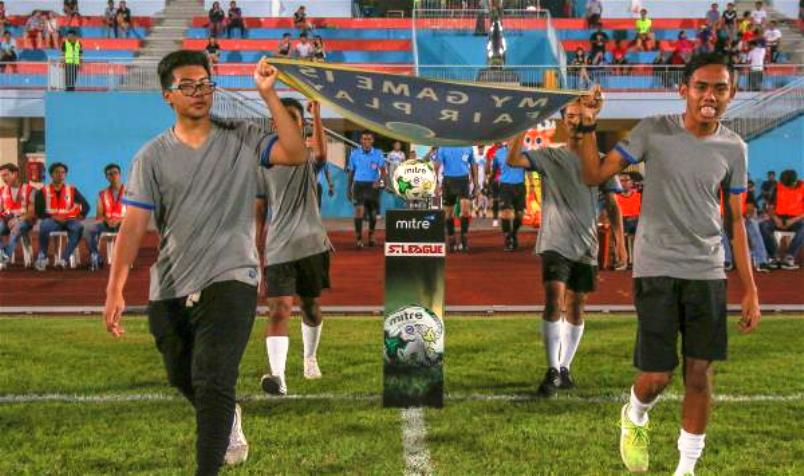 TUESDAY, November 1 2016, is the final day of the S-League season with the awards presentation at the posh Marina Bay Sands.

This year is also the 21st season of the much-maligned S-League, which is really falling over in quicksand, yet hailed by the gate-keepers as one of Asia’s leading professional football ecosystem, with an exaggerated, yet unaccounted for, “25 per cent rise in spectatorship” (as reported in TODAY newspaper).

Somewhere along the corridors of Jalan Besar Stadium, there are even subjective screams that it’s “one of the best ever S-League seasons”.

So, if this is real, what’s the bona fide future of the S-League? And it’s something Football Association of Singapore (FAS) President Zainudin Nordin must seriously ponder if ever he gives a farewell speech at Tuesday’s event and as he hands over the baton to the new team by end of the year.

Pertinent questions he has to tamper with are in relation to drastic measures to save the S-League and the football ecosystem: Should we go on to the S-League 22nd season? Should we go semi-professional or even lower as there appears to be no “football culture” taking shape, as the critics say, without a sustainable model?

Should we do away with the foreign teams, in probably the only pro league in the world without promotion or relegation?  And mind you, it is now two seasons in a row that the S-League, Singapore Cup and League Cup titles have all been won by foreign clubs!

Yes, whatever happened to plans for the privatisation of the S-League? I believe privatisation may well allow for investors to monetise the club assets, a thriving situation that exists in Europe, and more critically, going the direction already being made north of the Causeway in the Malaysian Super League (MSL).

In January last year, the Football Association of Malaysia agreed a 15-year deal with MP & Silva, with the media rights company committed to pumping at least RM 1.2 billion ($393 million) into the association. The deal will also see the MSL make moves towards privatisation.

More importantly, I’d like a very serious, if not sincere, answer from the FAS President: Why isn’t his band of council members actively supporting, by just turning up to watch the S-League? Have they found it so monotonous or mundane that they majority don’t patronise even one single match this season? Or is it a “cannot-be-bothered bummer” of total disinterest to a home-based professional football league?

Why is there such an indifferent or impartial attitude along the corridors of the FAS Jalan Besar Stadium headquarters to support Singapore’s professional league, which Zainudin once said contributes $200million to the nation’s economy?

Perhaps the biggest slap in the face came from Tampines’ Rovers mega-star striker Jermaine Pennant, the highest-ever paid former England international to play here over two decades. He leaves this month with the most sarcastic parting shot that even (Argentinian) Lionel Messi couldn’t save the S-League.

Even the top British newspapers reported him moaning about the “shortage of cash in the local game, and lack of government support…means football in the country will remain in the doldrums”.

I felt the 33-year-old former Arsenal, Liverpool and Stoke winger prejudicially hit FAS below the belt with his cringing words: “No matter who you get, you could bring (Lionel) Messi here, yes, you’d attract fans but without money, and the government and the league helping out like they do with other sports, or what they do in other countries, it’s not going to grow.

I wonder, too, why Zainudin and the FAS never gave a proper Pennant response. Or why they are always pointing the fingers, not at themselves, but at the clubs for their miserable board-room performances?

There has been plenty of conjecture surrounding Zainudin’s proposed Asean Super League (ASL), set to take off next year although Asian Football Confederation (AFC) sources say there’s “not a ghost of a chance of this happening as majority of the 11 South-East Asian countries are not fully backing the ASL”.

Major global sponsors I spoke to say the biggest begging questions FAS have neglected in recent years: Where’s the value in the home-grown clubs and the support the FAS gives them to grow? Where’s the “product” in the S-League to draw the big bucks? Where’re the family-styled crowds and, more critically, why are the FAS Council Members so indifferent to supporting their own professional league?

This is the hard truth but the only clubs serious of the S-League are NOT Singapore clubs but the two foreign invitees from Japan and Brunei, who’re genuinely re-inventing their style of play and management to regional professional entertainment standards.

From the ‘Land of the Rising Sun’, Albirex Niigata Singapore (ANS), has been the role-model and deservedly so, winning an extraordinary four titles (Community Shield in February, League Cup in July, S-League title on October 14 and Singapore Cup on October 29) this season.

Over the years, the Japanese satellite team, who has been part of the S.League for 12 seasons, has provided the noteworthy examples of how to engage the grassroots in order to win over the heartland fans with a serious approach.

Even a blind man can feel the Japanese touch along the west coast of Singapore as you get a bubbly Japanese feeling. The Japanese School is there, the Japanese Gardens offer refreshing green scenary but, more captivating, is the rip-roaring football influence of Albirex Niigata, who stand out like an inspiring thumb in the way they blow their trumpets to instill a sense of genuine professional football.

They are just one of two foreign clubs, the other being 2015 S-League champions Brunei DPMM, who finished in No 3 position, always with the generous royal family support. Just go for an S-League match at the Hassanal Bolkiah National Stadium in Bandar Seri Begawan and you see a number of royal family members and senior government officials at every match – the ironic reverse of what’s happening in Singapore, with barely one FAS Council Member in regular sight!

Mind you, it is now two seasons in a row that the S-League, Singapore Cup and League Cup titles have all been won by foreign clubs.

The big exacting question: Why can’t the Singapore clubs come close to learning the football trade secrets form the two foreign clubs? Why can’t the FAS offer behind-the-scenes leadership support to ensure that there is a harmonising of playing talent, office administration and grassroots relationship?

For starters, I reckon the puzzling answers remain hidden along the dark corridors of Jalan Besar Stadium as senior staff tells me there is apparently no teamwork or sync between the FAS and S-League. If they don’t see eye-to-eye or complement and work harmoniously, what chance for the S-League or the 46 affiliated football clubs in town?

TIME TO WAKE UP, FAS

Let me poignantly remind that football will be headed to its death-bed if FAS don’t wake up from its pitiful throes and get re-organised after the November 7 EOGM, where for the first time in over three decades, there’ll be genuine democratic elections without political interferences.

Whoever comes to the platform, faces an onerous challenge of rebuilding a despairing, demoralised, downhearted football ecosystem, where the grassroots clubs feel totally neglected and a much-maligned S-League, on the verge of grasping last straws and wondering if it can go on to the 22nd season.

It’s time to wake up. It’s time for the non-engaging FAS Council Members, right from the top, who don’t bother to come for a single S-League match, to throw in their towels. It’s time for the complacent staff of over 70 at FAS headquarters to ponder over their respective roles.

It’s time for a massive overhaul, unprecedented in Singapore football just the same way Zainudin Nordin boldly did in January 2011, when he astonishingly disbanded the entire Lions squad.

It’s time for another major disbanding, not of the players but of the FAS Council Members and the senior FAS staff. It’s time to throw out the non-performers and bring in refreshing new faces. That’s the only way forward if Singapore doesn’t slip recklessly further down the lowest-ever FIFA ranking of 171.

I vividly remember Zainudin’s words in January 2011: “I never felt it was a bad decision (to disband the Lions). The players’ places in the national team are not permanent positions. Over time, people tend to forget that. I wanted to remind the Lions that playing for Singapore is a privilege. They must wear the flag on their chest and make the country proud, it is not a right.”

Likewise, FAS must touch their hearts and make the decisive decisions this month as November 1 represents All-Saints Day, wherein Christians are reminded to celebrate what God has done through people, and how the “great cloud of witnesses” is both wider and deeper than we might think.

Zainudin must have the courage to make such radical late changes, even in extra-time of his presidential term, if only to remind Singaporeans that football is only for those with real sporting balls in their hearts and souls.

Yes, only for the ultra-passionate who come and watch the S-League and fraternise with the grassroots and know the real problems of the football heartlanders. And in doing so, they truly get a grip of groundswells and move on to refreshingly change the landscape.

Please do it or be doomed, this is my season-ending message to Zainudin Nordin and his bandwagon of passionless football mates, who’re probably on the verge of bringing football to its knees.