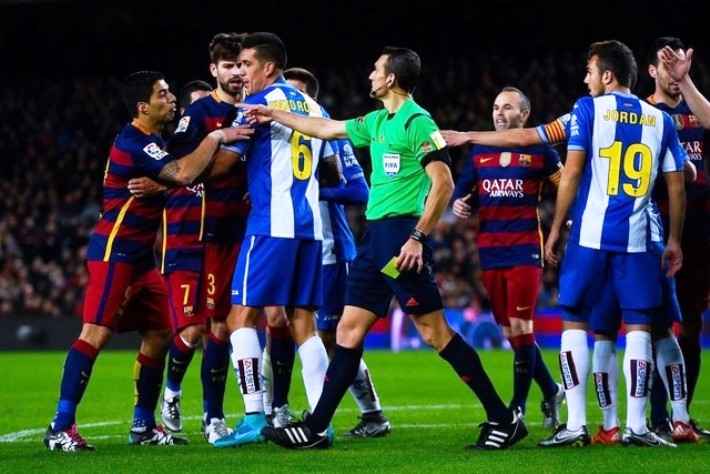 Barcelona striker Luis Suarez faces a ban of up to three Copa del Rey matches after being cited in the referee’s report for calling Espanyol players “a waste of space” at the end of a heated Catalan derby.

Barca won the first leg of the Copa de Rey last-16 tie between the sides 4-1 on Wednesday as Espanyol had two players sent-off and were lucky to escape further punishment as goalkeeper Pau Lopez’s violent stamp on Lionel Messi went unseen.

However, it is Suarez, who was also booked for a clash with Lopez, who is expected to receive a one to three-game Cup ban for sparking a brawl in the tunnel after the game that security personnel had to break up.

“Whilst all the Espanyol players climbed the stairs in the tunnel towards the dressing rooms, he (Suarez) waited for them and confronted them saying on various occasions: “Here I am waiting for you, come here; you are a waste of space,” referee Juan Martinez Munuera wrote in his report.

“That provoked a clash between players from both clubs forcing security personnel present and the managerial staff from both teams to intervene.”

Espanyol’s physical approach had frustrated Barca in an equally fiery clash between the two in La Liga on Saturday which finished 0-0.

Suarez’s controversial career has seen him receive four long bans; three for biting opponents and once for allegedly racially abusing French defender Patrice Evra during his time at Liverpool.

Yet, the Uruguayan’s behaviour since joining Barcelona 18 months ago has been exemplary and a suspension would be his first since the four-month ban he received for his latest bite on Giorgio Chiellini at the 2014 World Cup. – Agence France-Presse