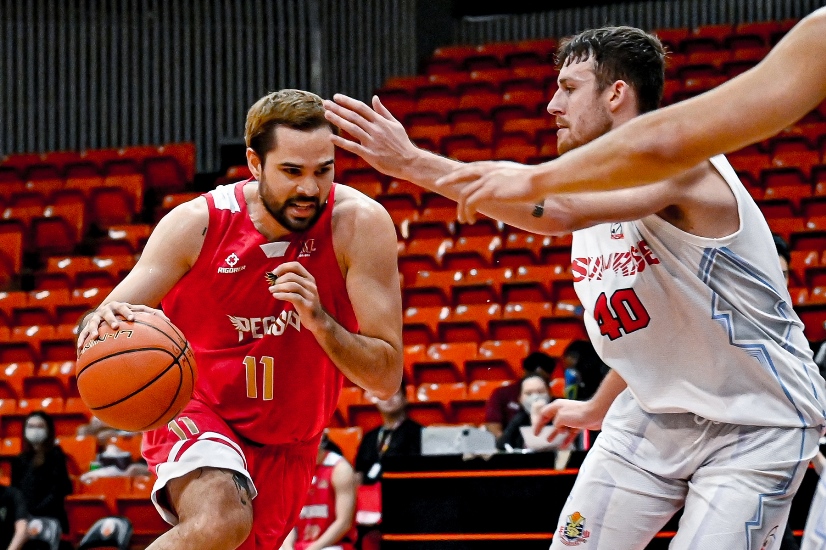 It was Pegasus with the hot start as they took the 27-16 first quarter lead through their efficient offense, scoring 68% led by Lee Jia Jun and Wutipong Dasom combined 15 points.

Sunrise Youngster’s guard duo of Tan Chi Sheng and Jayson Lee sparked a positive early 11-3 second quarter run for the Penangites as they cut the lead to three before Wutipong Dasom  helped Pegasus regain their momentum as the Thai forward along with Filipino big Kemark Carino delivered strong performances on both ends of the floor to make it a seven point lead at the break.

Wutipong Dasom earned the honour of the first dunk of the season at the 7:39 mark of the third quarter.

Undeterred by Dasom’s dunk, Sunrise Youngsters kept their focus and Goh Yan Qing replied with six straight points keeping the game close and ultimately back to back three pointers from Jayson Lee tied the game with three minutes to go before Pegasus’s East Malaysian duo of Barry Kong and John Tang combined eight points to give their team a four point lead at the end of the quarter.

Sunrise Youngsters kept up their push and eventually snatched the lead through a Jean-Luc Morel early in the fourth. Unfortunately for the Australian, a fourth foul sent him to the bench, allowing a Wutipong Dasom 10 points burst to regain and stretch the lead to five with two minutes remaining.

Not wanting to let his older brother hog the limelight, Sunrise Youngster’s own Thai star, Kittitep Dasom struck hot with a pair of three pointers cutting the lead to two with a minute to go.

A foul by Chong Zhen Yang on Jayson Lee led to three made free throws with thirty seconds remaining to give Sunrise Youngsters the lead for good.

Leong Zhen Kang and Lee Jia Jun could not make their shots count and at the end, it was the team from the North celebrating at the buzzer.

The Player Of The Game was Kittitep Dasom with a 24 points outing with clutch plays on both offense and defense in the closing seconds helping his team to the win.