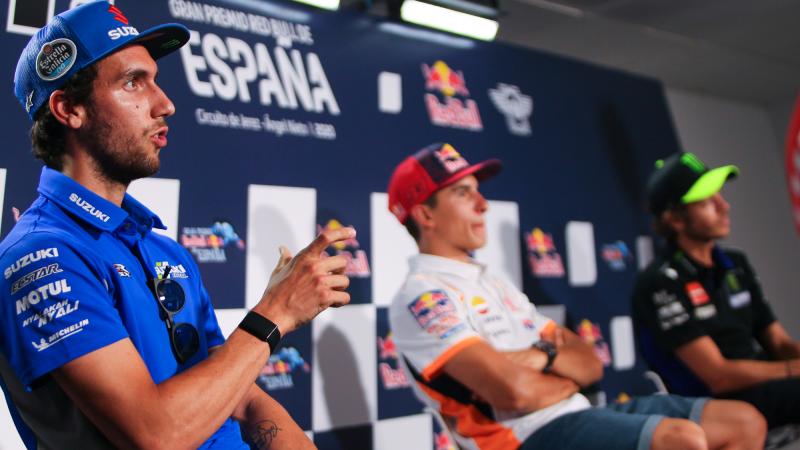 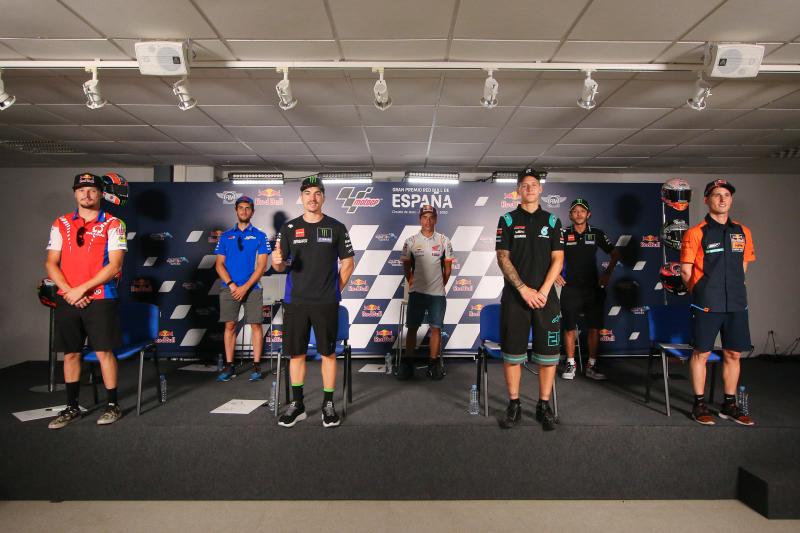 Rins, Viñales and Quartararo were in boisterous moods in the Spanish GP Press Conference – but can they beat Marc Marquez?

This weekend, we’re #RacingForThem as the riders aim to put on a show like no other at the Circuito de Jerez-Angel Nieto. And, as expected, they’re all pumped to finally get 2020 underway. One thing that was apparent in the Press Conference was the confidence that oozed from Viñales, Quartararo and Rins ahead of Sunday’s 25-lap scrap. Both Yamaha and Suzuki had a very, very promising preseason and – arguably – went into the scheduled Qatar opener as favourites.

Fast forward four months and the trio in the Press Conference couldn’t wait to continue their work in Jerez, with Viñales stating: “I feel fantastic, I mean the atmosphere inside the team is great, the harmony in the team is great. I think all the pieces are there. We need to keep going, we need to keep doing the job and what we were building last year. I can’t wait to be on the bike, I mean we left the bike in Qatar in really good form, yesterday I felt incredible since the first lap and the feeling was there.”

Fellow Yamaha star Quartararo admitted Wednesday’s test wasn’t an easy day, because the 2020 bike is “completely different” to the 2019 YZR-M1. However, that didn’t stop the Frenchman from having a great feeling.

“After such a long time without riding a MotoGP bike, it was so fun to feel the speed. It wasn’t an easy day because the 2020 bike we only rode in Sepang and Malaysia and I was struggling in the first session because it’s so different to the last year’s spec that I had but I saw that yesterday the potential of the bike was really good and we need to adapt as quickly as possible because the other guys are also really fast.

“I think that, like Maverick said, the top speed is something we still need to improve but, honestly, I’m feeling really good with the bike. There are still somethings that we need to adjust compared to last year’s bike but to close the gap with Marc we will need to do a really good job because we know that he’s fast everywhere and in every condition, so we will need to adapt quickly to every situation. In the rain he was so fast, like in Brno, in mixed conditions he was so fast, so we will need also to adapt as a rider in these conditions.” 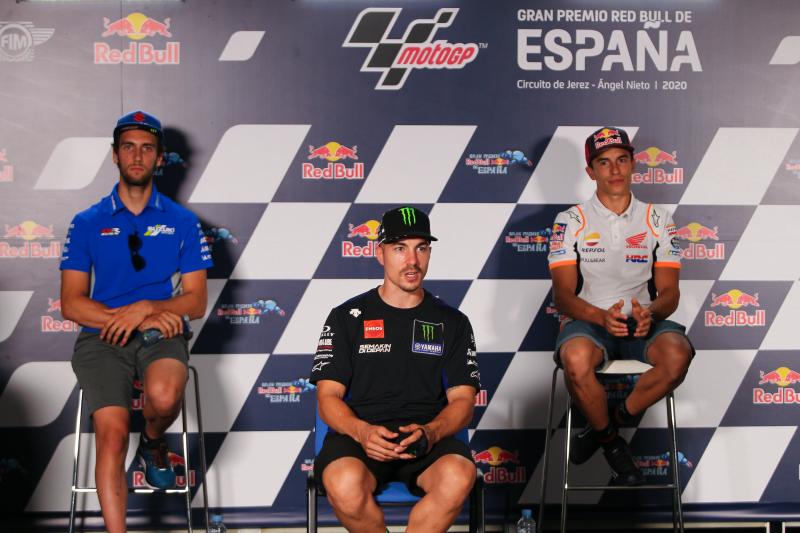 A certain number 42 was also in high spirits, adamant he’s feeling as good as he ever has: “We did a big step from last year. Our bike has changed a lot so thank you to the Suzuki guys for the work in Japan for the new chassis and engine,” began Rins. “The preseason was quite good, we started herewith a lot of confidence on the bike. I think I’m more ready than ever and I want to start now.

Last year, the last third of the year, we missed some consistency. But this year we found something on the bike and in the winter I worked hard during the winter to improve the consistency so I will try to fight on top for the maximum time possible.”

Good news for fans of those riders and manufacturers. However, it’s not going to be that simple. Marc Marquez and Honda may have struggled for the majority of winter testing, but in the last hour – according to the number 93 – of the Qatar Test, the World Champions found something. With that shoulder injury completely healed and a bike underneath him that’s working, Marquez isn’t going to be giving up his crown that easily – and the eight-time Champion was confident ahead of the season opener.

“It’s great to be back to normal life and MotoGP racing but the most important thing is to try to help all the people that were affected, millions and millions and more will be. But all the small help that we can get to them is really important and we will do. Like you did, like many riders did and that people be conscientious that this virus is still there, and we must be patient and also pay a lot of attention,” said Marquez, before discussing the test and the weekend ahead.

“Yesterday was an important day. Firstly to be back on a MotoGP back and then also because in preseason I had a few doubts; doubts about the technical side, doubts about my physical decision, but yesterday everything was fixed. I’m now completely fit and can ride like I want. In the preseason I was struggling a lot. On the technical side, in the last hour on the Qatar test we made a big step and yesterday we reconfirmed that we got back the feeling from 2019 and that was really important for our box. Now it’s time to work because now we need to retry all the things we tried in the winter test, some new items, so I’m looking forward to riding again tomorrow and keeping going.”

Marc Marquez vs Yamaha vs Suzuki. Sounds like a mouth-watering prospect right? 2020 is soon to rev back into life for the MotoGP™ riders and Friday’s track action will give us a first indication as to who is going to be the leading protagonists in Jerez, but it won’t just be the aforementioned riders gunning for glory. With less than a second covering the top 15 in the test, the list of potential winners and podium threats stretches way past Marquez, Rins, Viñales and Quartararo.

MotoGP™ is back and you can tune into FP1 from the Spanish Grand Prix at 09:55 local time (GMT+2) on Friday morning – as well as tuning into the Moto2™, Moto3™ and MotoE™ sessions too. Check the full schedule for the weekend here! – www.motogp.com