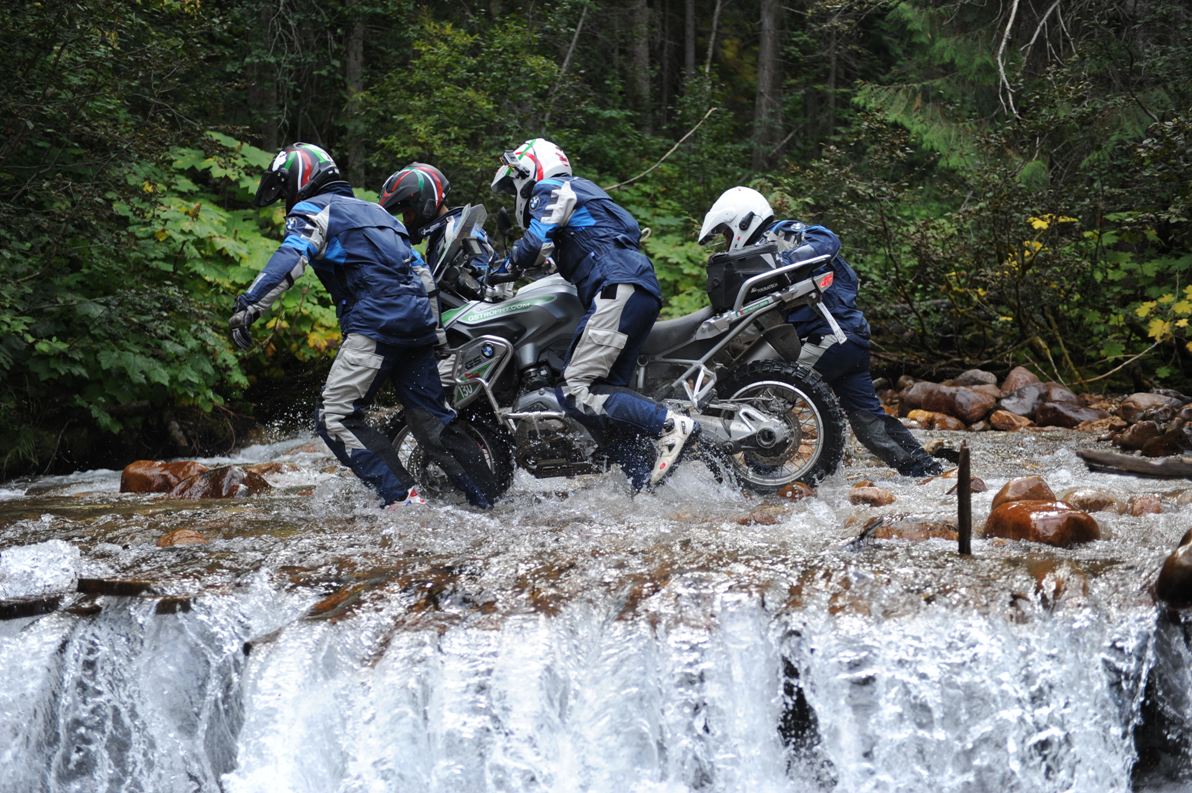 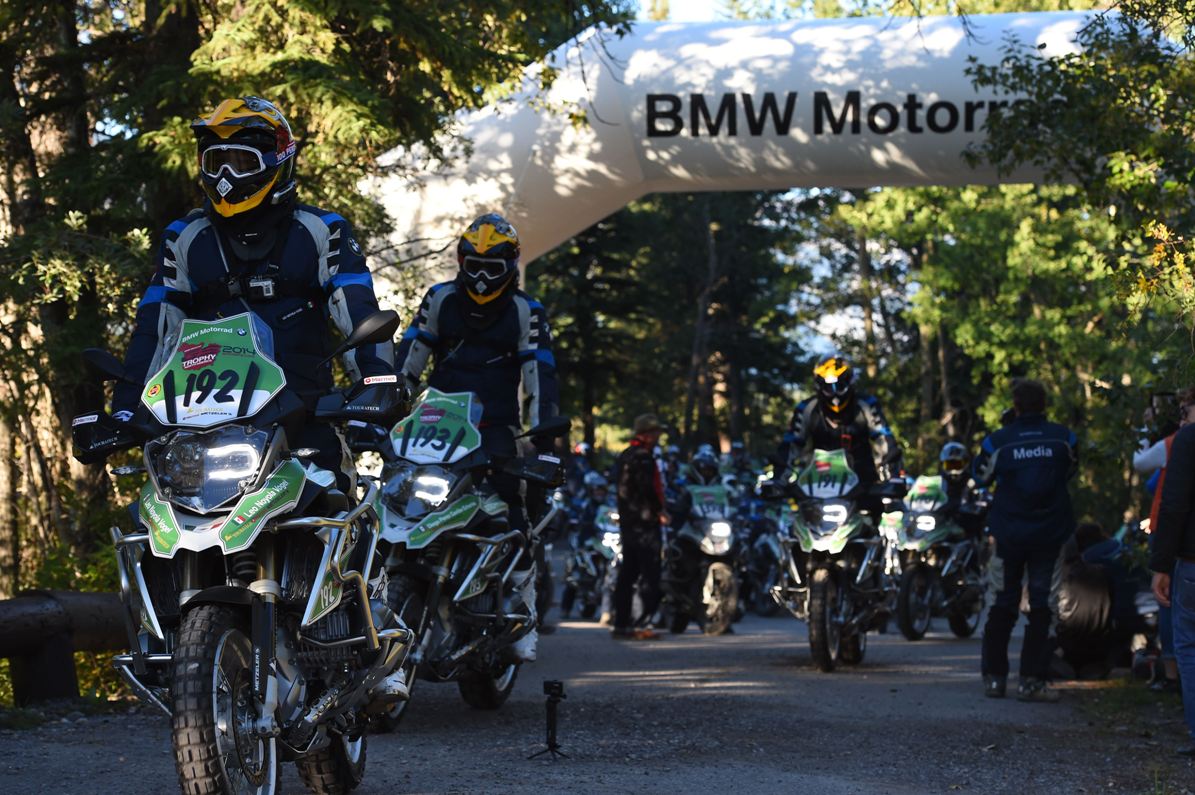 Team CEEU leads the GS Trophy tonight after impressive performances in the first two special tests of the 2014 edition. Team France and Team South Africa are snapping at their heels in second and third place respectively.

Day one of this once-in-a-lifetime week-long adventure saw the 48 competitors and 16 journalists taking part in the 2014 Trophy get their first real taste of Canada, as the route took them right into the picturesque Rocky Mountains.

An early departure time meant that a 6am wake-up call was necessary to give participants the chance to strike camp, eat breakfast, attend the safety briefing and pose for the customary team photos before finally setting off. Despite early morning temperatures as low as two degrees, clear, sunny skies soon warmed the riders, and an initial paved section gave them all a taste of the wild beauty of Alberta. The route passed by interestingly-named places such as Widowmaker Creek and Grizzly Creek, offering stunning views of the Glacier National Park. It also took the riders past the towns of Canmore and Banff before heading off on a forest trail towards the first special – the aptly-named ‘Broken Bridge’

Here, each three team members and their accompanying journalist had to haul all four of their GS Trophy bikes – one by one – across a rocky, shallow, but fast-flowing river and up a steep muddy bank. It was great to see the legendary spirit of the GS Trophy already in evidence, as teams cheered on and supported their ‘rivals’, constantly encouraging them throughout the duration of their tasks.

Several hours were needed to get all the teams across the river, after which they continued on their way on a fantastic trail through pine forests to their camp for the night at the resort town of Golden – where another special test awaited them. This ‘Golden 8’ test required each team rider to complete a slow-speed figure-of-eight course, collecting a ball at the start and then depositing it back in the same bucket at the end. With points deducted for stalling the engine, dropping the bike, or even putting a foot down, the pressure was on but again, all teams supported and applauded each other’s efforts. 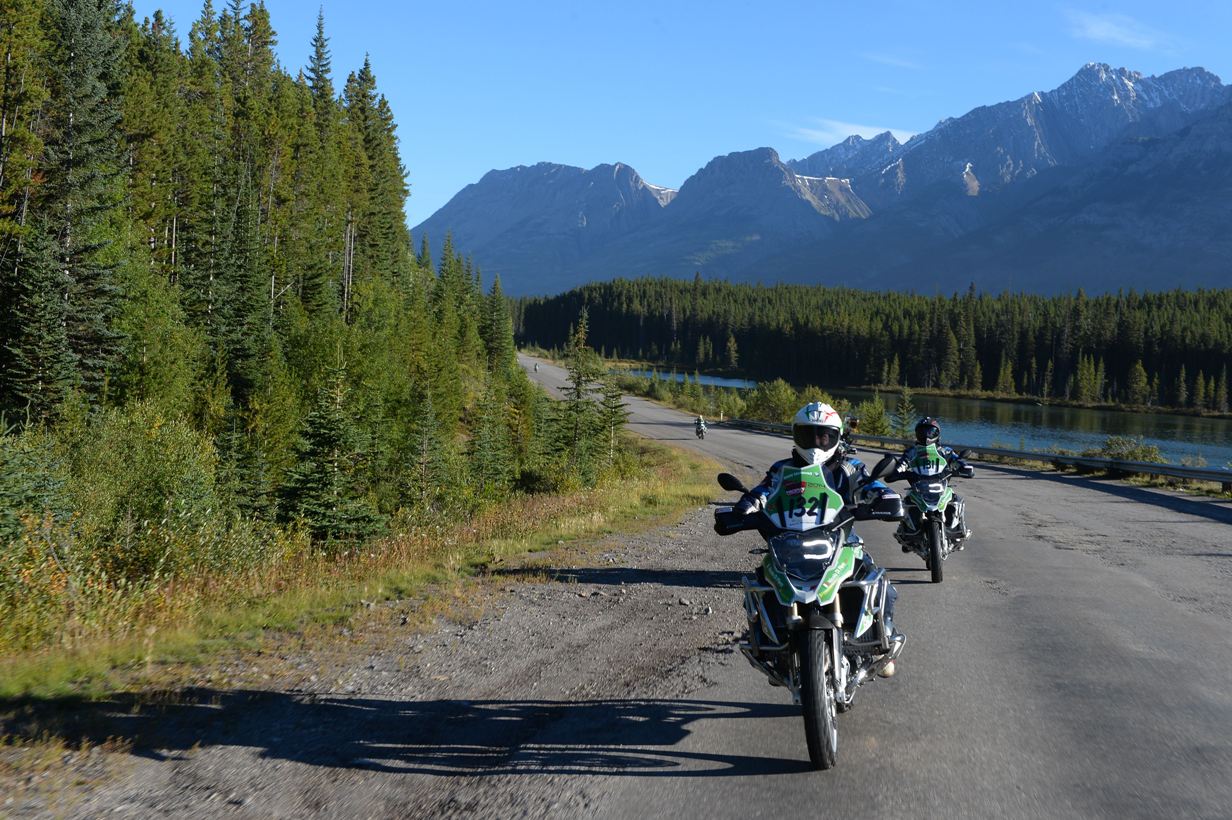 Soon after, the day’s results were announced and then the entire Trophy team enjoyed a fabulous buffet dinner, after which each team made a short, informal, and often funny presentation about themselves and their country. As the competitors continued to bond late into the night as they camped under the stars, the opening stage of the 2014 International GS Trophy was well and truly a success.

The day, however, belonged to Team CEEU, whose excellent teamwork strategy at the ‘Broken Bridge’ and highly-skilled riding technique saw them propelled to the top of the leaderboard. Mariusz Lowicki, Team CEEU commented: “This is just the first day, the beginning of the competition. Of course it’s nice to be on the top but we know we still have six days left and although we are excited about the prospect of those we need to concentrate on the coming days.

When we keep this result on the last day – then we can be very happy! On the Broken Bridge test we decided we should keep every man just doing one thing. On the Golden Eight test we scored maximum points – a great result! The ride today has been spectacular, the nature and scenery is amazing. In Europe we have high mountains that we can ride, but in these mountains there’s so little civilization that it’s completely overwhelming for us.”