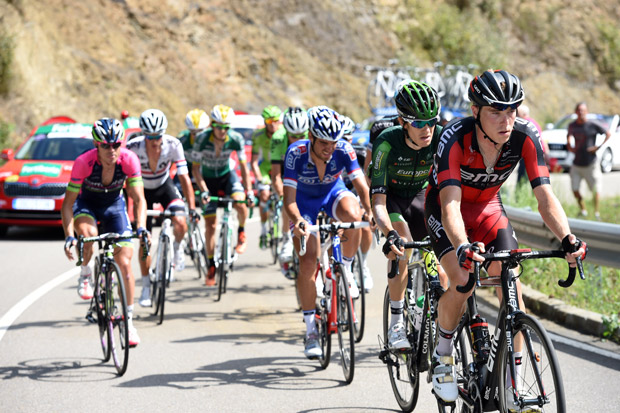 Alberto Contador moved a huge step closer to his third Tour of Spain victory as he saw off Britain’s Chris Froome to win a gruelling 160.5 km stage from San Martin del Rey Aurelio to La Farrapona on Monday.

Contador’s first stage victory of the race in a time of 4hr 53min 35sec took his overall lead to 1min 36sec over compatriot Alejandro Valverde with Froome a further three seconds adrift as he just failed to move into second in the general classification.

Italian Alessandro de Marchi claimed third on the day, which was also marred by the disqualifications of Italy’s Gianluca Brambilla and Russian Ivan Rovny for fighting just after the midway point of the stage.

“Today was a very good day for us,” said a delighted Contador, who only decided to compete in the race a week before it began after suffering a broken shinbone in the Tour de France in July.

“I had the power I needed, I managed to keep going with the pace imposed by Froome and when I saw my opportunity I took advantage of it.”

The landmark stage of the race, including four category one climbs, was expected to play a decisive role in who is crowned the winner in Santiago de Compostela on Sunday.

However, the jousting between the general classification leaders had been overshadowed by the punch up between Brambilla and Rovny whilst they were part of a breakaway group of 13.

Rovny even had to ask for a new pair of sunglasses from his Tinkoff-Saxo team car as they were broken in the fight and despite riding on for over an hour both men were eventually told to stop and expelled from the race.

Froome eventually made a move with just four kilometres of the long climb to the finish line.

Contador was able to follow the 2013 Tour de France winner and the two managed to distance themselves from the chasing Valverde and Joaquim ‘Purito’ Rodriguez.

Froome, though, couldn’t live with Contador’s acceleration in the final 500m as he strengthened his grip on the race with just five stages remaining.

“When Froome has a change of pace it is difficult to follow him but I managed to do it and I knew Valverde and Purito were behind so it could be an important day for me,” added Contador.

“What gives me more reassurance is that I am recovering well, I have the power in my legs despite the blow I suffered and now we have a rest day ahead of us that we need to make the most of.”

After Tuesday’s rest day, the race returns with a flat 190.7km ride from Ortigueira to A Coruna on Wednesday.