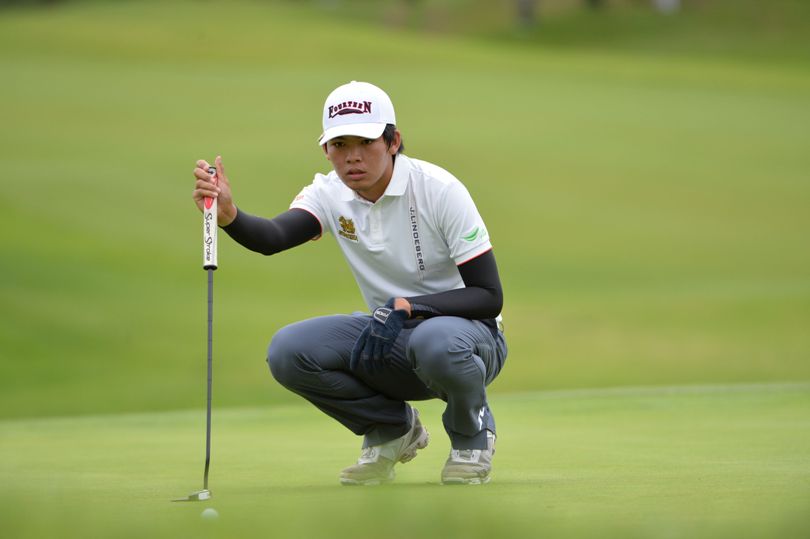 Thai teenager Phachara Khongwatmai underlined his rising star credentials when he signed for a three-under-par 67 to lead by one shot at the halfway stage of the Asia-Pacific Diamond Cup on Friday.

The 17-year-old Thai, who enjoyed his Major debut at The Open earlier in July, fired five birdies against a double-bogey to take his place atop the leaderboard on seven-under-par 133 total at the highly-acclaimed Ibaraki Country Club’s West course.

Local prospect Ippei Koike returned with a 67 to share second place with compatriots Rikuya Hoshino and Shugo Imahira, who posted rounds of 66 and 69 respectively, at the ¥150 million (approximately US$1.3 million) event sanctioned by the Asian Tour and the Japan Golf Tour.

Thailand’s Thitiphun Chuayprakong carded a 69 to take fifth place on 135 alongside local duo Michio Matsumura (63) and Ryuko Tokimatsu (66) while overnight leader Satoshi Kodaira posted a 72 to sit a further shot back in tied-eighth place.

Starting the round with a two-shot deficit, Phachara reeled in four straight pars from 10 before stumbling with a double-bogey on 14.

The talented young man, however, recovered strongly with five birdies in the next six holes to put himself in the lead for the very first time on the region’s premier Tour.

“My short game was good but I didn’t drive the ball as good as I did yesterday. Conditions were calmer compared to yesterday. I made a mistake on the 14 where I hit a bad iron shot into the water but I told myself not to think about it and just move on from there.

“I am very happy with the way I bounced back from it. I stayed patient and focused on every shot out there. I will continue to try my best in the next two days,” said the young Thai, placed 69th on the current Order of Merit.

Phachara rose into prominence when he became the youngest Asian Development Tour (ADT) winner at the age of 15 last May. He secured a spot in The Open 2016 after finishing sixth at the Asian Tour’s Thailand Golf Championship later in December and went on to claim his second ADT title the same month.

The young Thai talent had earlier created headlines as a 14-year-old amateur. He became the youngest winner of a professional tournament when he won the Hua Hin Open on home soil in 2013.

Thitiphun, a one-time Asian Tour winner, struggled with an ankle injury throughout the round but played through the pain barrier to keep himself in the title mix.

“I hurt my right ankle and it affected me today, especially during my down swing. I felt discomfort hitting the ball and walking on the course out there. I have to thank my caddy, Greg, who cheered me up all day,” said the 24-year-old Thai, who marked his card with four birdies against a double-bogey and a bogey.

“I made some big mistakes but I managed to recover well. I didn’t play as well as I did yesterday but I am still happy with a 69. I am not far from the lead so I will continue to fight for better scores in the next two rounds,” Thitiphun added.

Local prospect Koike, who is searching for a breakthrough win, surprised even himself when he matched his opening day efforts with five birdies against two bogeys to trail by one at the Asia-Pacific Diamond Cup.

“My tee shots and approach shots were good. I am really surprised with how I played the last 2 days.  When I played my practice round, I thought I could only managed an even-par. This course is difficult. I have to concentrate on my game in the next two days,” said the 31-year-old Japanese.

Scores after round 2 of the Asia-Pacific Diamond Cup being played at the par 70, 7320 Yards Ibaraki CC course (am – denotes amateur):