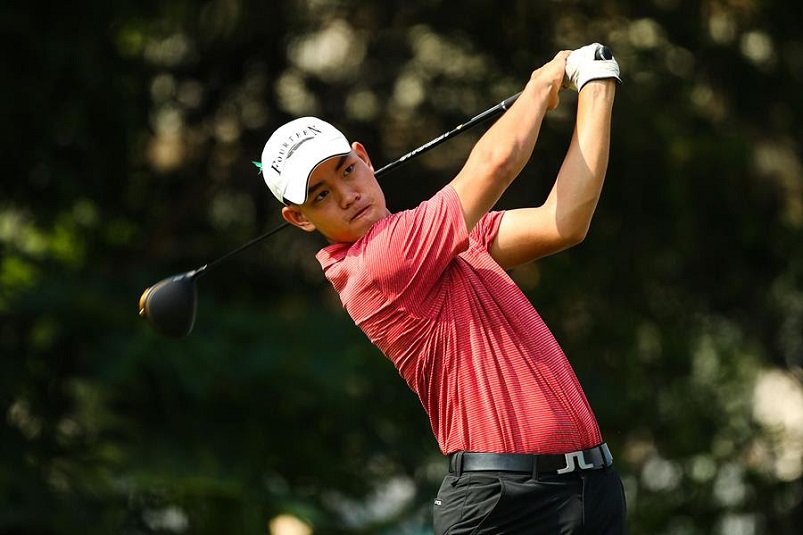 The fairytale rise and rise of Denwit Boriboonsub continues apace with the Thai on the cusp of a maiden Asian Development Tour (ADT) title at storied Blue Canyon Country Club.

The 18-year-old from Pattaya has carded successive 66s on the stunning Lakes layout at the famous Phuket club to sit alone atop the Blue Canyon Classic leaderboard at -10.

Boriboonsub will start the final round of the 54-hole Beautiful Thailand Swing event co-sanctioned by the MENA Tour with a single shot buffer over Malaysia’s in-form Shahriffuddin Ariffin, fellow Thai Witchayapat Sinsrang, India’s Kartik Sharma and Swede Filip Lundell who is incredibly contending despite a scary scooter crash on the eve of the tournament.

India’s Udayan Mane, the first-round leader, carded an even-par 71 on Saturday to remain eight-under for the championship and right in the mix for what shapes as a multi-player shootout for the title. As many as 35 players are within five strokes of Boriboonsub.

The teen pace-setter is among a catalogue of talented young Thais making their way in the Asian Tour eco-system. He sprung to international prominence with a joint runner-up finish behind compatriot Phachara Khongwatmai at the Laguna Phuket Championship on the Asian Tour in December, a result that netted him a healthy US$74,333 payday.

It also helped propel Boriboonsub inside the world’s top 500 for the first time. Indeed the Thai has soared from 1,353rd place in the OWGR to 721st after claiming the All Thailand Golf Tour’s Singha Chiang Mai Open last November, and then 487th after his Laguna title charge. That’s a mighty impressive 866 place jump up the rankings.

He got as low as 471st as recently as another top-five ATGT finish in January and while he is back out to 487th, he’ll be hoping to achieve a career-best ranking come Sunday afternoon.

Boriboonsub’s game is clearly trending in the right direction again. He quickly rebounded from a missed cut in the first of the four BTS events, the Laguna Phuket Challenge to finish -9 and in a share of 7th at the Laguna Phuket Cup which finished last Tuesday. He’s now 29 under par for his last five rounds on the ADT.

“I think it’s the rhythm of my swing and game plan and also my mindset,” Boriboonsub said of his form reversal after mixing six birdies and a bogey.

“I struggled for two months in January and February but it is coming right. Today’s round was pretty solid. I hit a lot of fairways and the irons are sharp.”

But maybe they should all be wary of the injured golfer Lundell who added a gritty 67 to his gutsy 66 in the first round. The Swede is bandaged heavily after falling from his motorised scooter after a meal out in Phuket but is clearly determined not to waste what is just his second cut made in his third ADT start this season.