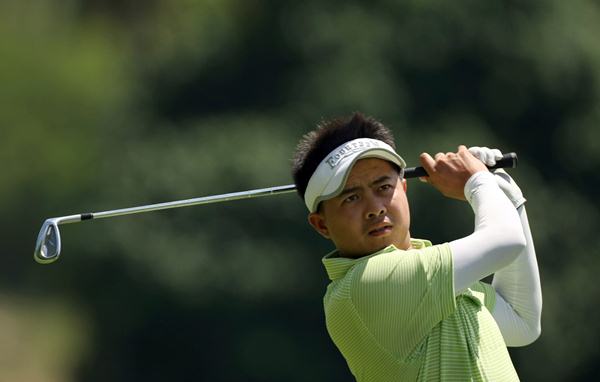 THAILAND’S Wisut Artjanawat shot the day’s lowest score of seven-under 65 to move atop the leaderboard at the halfway stage of the RM200,000 PGM Sime Darby Harvard Championship today.

The 32-year-old, who opened his campaign with a 69, got off to a scorching start when he fired one eagle and four birdies to turn in 30. He led the chasing pack by two shots after compiling a two day total of 10-under 134 in the season-opening Asian Development Tour (ADT) event.

Taiwanese duo Chan Shih Chang, a one-time winner on the ADT, and Lee Yi Cheng posted matching 67s to share second place on 136 with Nils Floren of Sweden and local hope Nicholas Pua at the Harvard Golf and Country Club.

Malaysia’s Zurie Harun signed for a 70 for sixth place while compatriots R. Nachimuthu, Shaaban Hussin and S. Siva Chandhran, the 2010 ADT Order of Merit number one, returned with identical 69s to tie on seventh with overnight leader Malcolm Kokocinski of Sweden, who carded a 72.

“My short game was very good today and I am pleased with my performance so far. Honestly, I think this is a relatively easy course for me but you really need to stay focused to play well here. Your short game must be good too so I guess it was an advantage for me,” said Wisut.

“I decided to play on the ADT after missing the grade at the Qualifying School because I think it’s a good pathway for me to play my way back into the main Tour. We get to earn Official World Golf Ranking (OWGR) points too which is good,” added Wisut, who traded one eagle, seven birdies and two bogeys.