Home 2020 The new GLA: ‘Designed for the wilderness. Enjoyed in the city’ 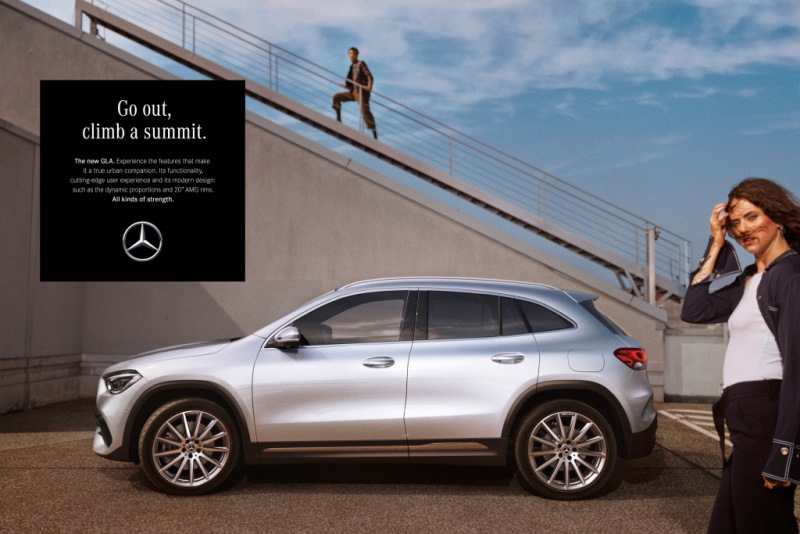 Climb mountains, overcome obstacles and embark on a wilderness adventure: Mercedes-Benz is breaking with the expectations of SUV communication. The campaign to launch the new GLA turns the usual advertising cliché on its head. Under the title “Designed for the Wilderness. Enjoyed in the city.” it plays humorously with the fact that the GLA has all the features for off-road adventures, but hardly anyone uses their potential.

At the heart of the campaign are four TV spots. The 20- and 30-second spots portray different city dwellers who arrive safely with their GLAs in a remote place and put themselves to the test there. But they quickly reach their limits – the seawater is far too cold or the encounter with a large ostrich too frightening – and return to where they and their GLA belong: an urban environment.

The entertaining “reality checks” are a charming and honest homage to the target group – humorous, pointed and full of self-irony. The Europe-wide campaign launch is mid-May. In Germany, two spots will be on TV and online starting in June.

The moving image formats were produced by Anorak. They were directed by Sebastian Strasser, whose promotional films have won more than 150 awards including 16 Cannes Lions. Behind the camera was Dutchman Hoyte van Hoytema, who has already won several Oscars. Some of the actors are also renowned film stars – such as the British Mark Ryder, known from the movies “Robin Hood” and “Borgia”. He portrays the surfer in the TV commercial of the same name.

“With our GLA campaign, we are deliberately breaking with the usual mechanics and messages that have been common for off-road vehicles until now, because the truth is that few compact SUVs ever see the wilderness,” says Bettina Fetzer, Head of Marketing at Mercedes-Benz AG. “As an approachable brand, we want to portray our customers in their daily lives, as well as meet them there – with humor and a touch of self-irony.”

The campaign: the integrated GLA campaign is the communicative restart after the interruption following the COVID-19 pandemic. In addition to classic moving image formats, it includes numerous other assets– from a web special about Instagram stories and video add-ons to print and Out of Home motifs by French photographer Alice Moitié. The print ads and posters invite you to take a test drive and encourage contactless purchases in the online store.

From the end of June, the GLA campaign will be supplemented by another campaign for the EDITION 2020 special models of A-Class, A-Class Saloon, B-Class, CLA Coupé and CLA Shooting Brake. It has the same look and feel and is also photographed by Alice Moitié, to ensure a common media impact for all compact vehicles.

The GLA campaign can be found at the following link: www.mercedes-benz.de/der-neue-gla

The new GLA: the new GLA is the sporty and lifestyle-oriented entry-level model in the successful SUV model family from Mercedes-Benz. Its character was sharpened considerably compared to the previous model. The new compact SUV is more than ten centimetres taller than its predecessor. The correspondingly higher seating position offers the driver and passenger more headroom.

The leg space in the rear is also much larger – even though the GLA has become around 1.5 centimetres shorter. Off-road design elements and the optional 4MATIC all-wheel drive underline that the new GLA convinces on every terrain. With powerful and efficient four-cylinder engines, up-to-date driving assistance systems with cooperative driver support, the intuitively operated infotainment system MBUX, an elegant widescreen display and the comprehensive ENERGIZING comfort control system, the new compact SUV has all the strengths of the current compact class generation from Mercedes-Benz.