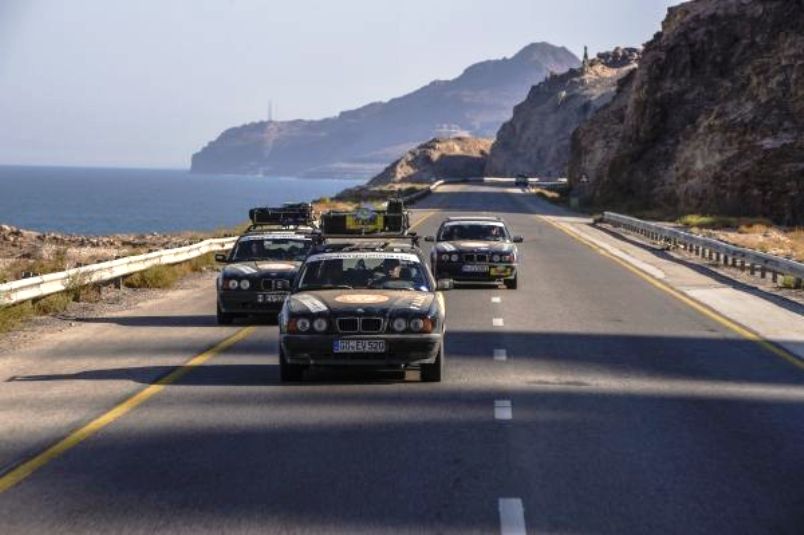 The teams in the Allgäu-Orient 2017 endurance rally crossed the finishing line in the Jordanian desert on Saturday 27 May 2017 after travelling 6,000 tough and dusty kilometres. The “5ever” team and its three BMW 520i touring cars from the E34 Series had just completed three adventurous weeks.

They had to contend with all kinds of weather conditions and drove through wind, rain and heat, driving across desert sands, rough terrain, through mud and across river fords. Flat tyres, minor hitches and major breakdowns were all part of the journey and demanded a tough approach and unflappable nerves from the team to overcome obstacles.

The Allgäu-Orient Rally is one of the longest endurance rallies in the world. The conditions are arduous and the teams have to keep to a rigorous low-cost budget. No car less than twenty years old or more expensive than 1,111 euros is permitted to take part. The “5ever” team decided on the BMW 520i touring in the E34 model series because it was regarded as very robust and suitable for driving long distances powered by the high-torque six-cylinder engine generating 150 hp.

A large number of these cars are up for sale in the marketplace and this makes them the ideal selection for this kind of rally. The first BMW 5 Series Touring (E34) was launched in 1991 and was immediately positioned as an innovative high-tech vehicle in the upper mid-range segment. The automobile followed on from the BMW 3 Series Touring (E30) in 1987 as the second BMW Touring and established a unique position in the marketplace with its combination of dynamic performance, innovative engineering and generous space.

It provided a convincing package with harmonious and sporting design, high body stiffness and a lot of clever solutions in the detail. The BMW Group supported the young team in their search for suitable vehicles and provided assistance with technical preparations. The team members also received some very special driver training under the guidance of two-times DTM Champion Marco Wittmann in the German Touring Car Championship.

Start in Allgäu during torrential rain and cold weather

On 7 May, the team got off to a wet start in torrential rain from Oberstaufen in the Allgäu region. The “5ever” team was highly motivated and well prepared. They were six young friends who had known each other for some time. Initiator Julia Hiltrop (32) and organiser Adil Sbai (31) had the original idea, Sofia “Soffa” Wieczorek (26), Sebastian “Basti” Schulz (30), Andreas Zachai (28) and Regina Herz (29) joined them full of enthusiasm. They quickly drove through Austria to Hungary and from there continued to Serbia.

BMW breakdown service in the middle of nowhere

The first problems came along just before the Turkish border. But the two BMW mechanics from Borusan Oto service centre took just two hours to reach them in their BMW X3. Since they were already on the spot, they also gave some assistance to two other teams. Then the journey continued across the Bosphorus and on to Asia Minor where a representative team of rally drivers took on veterans from the Turkish national team in a game of football. Nevertheless, they managed to achieve a win and 5ever team member Basti succeeded in contributing one goal to the 3:1 victory.

A race at a former military base near Ankara took a heavy toll on the cars. After a classic Le Mans start, the fully laden rally cars had a tough time but the “5ever” team succeeded in gaining a fifth place. Subsequent engine problems overtook one of the three BMW 5 Series Touring cars in Denizli, Turkey, and this setback initially put a damper on their euphoria.

But assistance from BMW Öztürk was fantastic. The mechanics worked their magic overnight and the “5ever” team was back on the road and motoring across Turkey the next morning. Almost all the roads were now stony, steep and out of the way. But the team reached places that were very much off the tourist trail.

The drivers flew to Israel by plane and the cars travelled separately on a ferry. In Haifa, the teams got back in their cars and the journey continued. A starter was repaired in Jaffa even though they always came across people who were happy to give a push. Regina and Andi went to a multi-faith school here and distributed presents to the children. One of the aims of the Allgäu – Orient Rally is to act as a bridge to other cultures and bring people closer together.

The entire field of competitors drove in convoy to the monument for David Ben-Gurion, the founding father of the state of Israel. They took a break at the Dead Sea and then went on to Jerusalem. After that, the journey took them through the Negev Desert and on to Wadi Rum or Valley of the Mood in Jordan. That made 3,000 kilometres and still no breakdowns.

Right from the start, it was obvious that this journey was going to be tough. The “5ever” team was therefore all the more delighted that they managed to secure 2nd place in the overall placings, just missing out on the victor’s laurels of a fully-grown camel. The three dust-covered BMW 5 Series Touring cars had impressively proved their endurance credentials and the team had meanwhile grown really fond of them. However, now it was time to bid farewell.

The cars were taken apart at the final destination and the individual parts were sold. All the proceeds from the sale were donated to several aid projects. The drivers then returned home in the comfort of a plane. A unique adventure had come to an end.