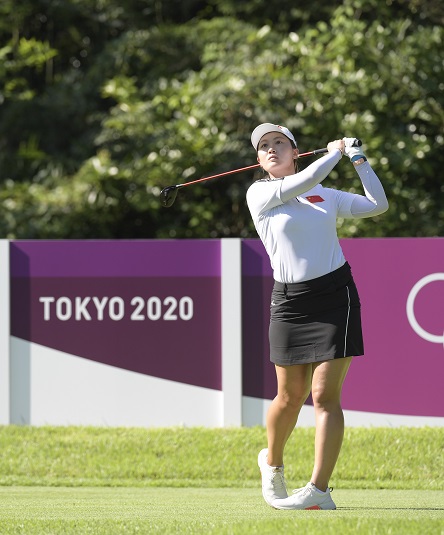 China’s Xiyu Lin cut a frustrated figure at Tokyo 2020 women’s golf competition following Friday’s third round but believes she is due for a bucket of birdies in her bid for an Olympic Games medal.

The 25-year-old Lin laboured to a 2-under 69 at Kasumigaseki Country Club’s East Course to stay within three shots of a podium finish in tied 10th place alongside compatriot Shanshan Feng, the bronze medallist from Rio 2016, who fired a 68 for a 7-under 206 total.

American World No. 1 Nelly Korda remained on track for the gold medal where a third-round 69 sees her taking a three-shot lead into the final round on 15-under over India’s Aditi Ashok, who carded a 68. Japan’s Mone Inami, Emily Kristine Pedersen of Denmark, Australian Hannah Green and New Zealander Lydio Ko, the silver medallist in Rio, share third place on 10-under.

Featuring in her second Olympics after tying for 38th in Rio, Lin’s main highlight was an eagle two on the short par-4 sixth hole but it failed to ignite her round on another steamy day which included one more birdie on the eighth and a lone bogey on 11.

“I played better than what I scored,” said Lin. “I hit lots of great shots. I even hit lots of good putts but just missing a bit of luck today. Burning lots of edges. I would say overall today, I actually played pretty good and I’m still happy. Hopefully tomorrow, I have a little better luck with putting.

“In China, we have a saying when you’re burning edges, you’re saving the luck in the bank. So I’ve been saving it for three days, it better give me a good one tomorrow,” smiled the two-time winner on the Ladies European Tour.

Lin’s highlight came on the sixth, which she struck a mighty three wood to about 20 feet for eagle.

“I started off really good. I had so many birdie chances and didn’t make any of them. And the fifth, I made a long 25-footer for par, and then I was thinking, okay, maybe my putter’s going to work now. They moved the tee up again on six and I hit a really good 3-wood and made a 20-footer. It’s really nice,” said Lin, who ranks first in Proximity to the Hole at 6.2 meters through three rounds.

Like Lin, Feng, who turned 32 on Thursday, eagled the sixth from three feet in a round which featured three birdies and one double bogey on the 11th. “Some of the pin positions were not very easy to attack, so I didn’t give myself too many birdie chances. The double on 11, that was a little bit unlucky. But it was still okay. I was still bogey-free, just had a double,” said the 10-time LPGA TOUR superstar.

Feng is not giving up hope on a medal, especially when she had opened with a 74, the same first round as Chinese Taipei’s C.T. Pan in the men’s competition last week who went on to secure a historic bronze medal for Chinese Taipei via a seven-man playoff after closing with a 63.

“Well 10-under, 8-under on the last day, that’s what we saw (last Sunday). This is the Olympics, like fourth or fifth it doesn’t matter. believe we have the best girls here in the world so everybody’s going to try to go low tomorrow,” she said.