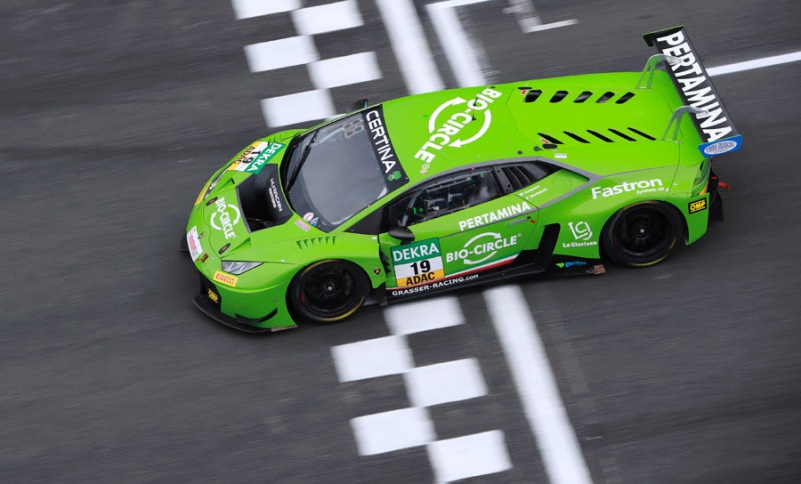 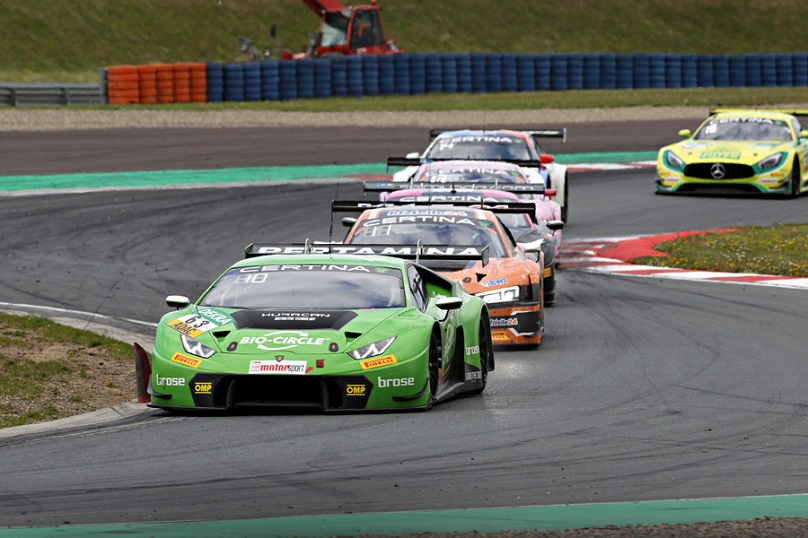 The start of the 2017 season of the ADAC GT Masters at Oschersleben brought solid results for the GRT Grasser Racing Team with one car finishing within the Top Ten and two victories in the Trophy category for Swiss driver Rolf Ineichen (CH). And the final result could have turned out even better, had not a penalty for an infringement under safety car cost a fifth place for Mirko Bortolotti (I) and Masters newcomer Ezequiel Companc (ARG).

Rolf Ineichen and Christian Engelhart (GER) in car number 63 started the first race on Saturday from P14, even after only missing pole position for only half a second, a clear hint to the extreme competitiveness of the field. They manage to climb up to P10 until the pit stop, in the end Engelhart crossed the finish line in the Lamborghini Huracán in P9.

“This was the absolute maximum, more was simply not possible,” said a really happy Ineichen, for whom the result also meant the first of two wins in the Trophy category. “The team again did a very good job, we also had a perfect pit stop.”

On Sunday things seemed to look even better with P11 on the grid, “but unfortunately Christian was spun around during the first lap with no fault of himself. That dropped us back to the end of the field. Afterwards we were at least still able to fight our way back to P12, bur more was out of reach.” When talking about the first lap incident, Engelhart emphasized, “that I actually had quite a decent start, but then the Mercedes ahead of me made a mistake and went off. When he came back to the track he turned me around…”

Mirko Bortolotti and Ezequiel Companc in the Lamborghini number 19 on Saturday managed to improve to P13 in the race after having reached P17 in Qualifying. In Sunday it looked like an even much better day when Bortolotti put the car on P5 on the grid, moved up to P4 before the pit stop, “and then Ezequiel actually did a mega job and crossed the finish line in fifth position,” team principal Gottfried Grasser stated. But celebrations over the top result should not go on for very long for the Grasser. After the race, they received a 30 second penalty for the Argentinian having left too much of a gap to the car in front of him. “That´s part of the learning curve”, said Bortolotti, who in general was not unhappy about the start of the season in GT Masters: “We did a good job during the whole weekend an I am glad I was able to extract the maximum out of the car in each session. It is just a pity about the penalty in the end…”

But even Grasser had to admit that “of course rules are rules. But, nevertheless I feel sorry for Ezequiel and Mirko for not being able to take their success home.” In general, he was rather content with the Oschersleben weekend. “First of all, I am happy that we did not have another big accident. The last few races were really hard for us. I think we delivered quite a solid performance. The series has become even more competitive this year. But I believe that the ADAC will have to think about the BOP for the future. Currently the difference between us and mainly the Corvette, Porsche and BMW is very clearly visible. But these guys are very good and clever, for sure they will sort it out very soon.”

Now he is already looking forward “to continuing to Brands Hatch for the Blancpain GT Sprint.” There Ezequiel Companc and Norbert Siedler (AUT) will share driving duties in car number 19, the Lamborghini Huracán number 63 will see Mirko Bortolotti and Christian Engelhart behind the wheel. „I love this track where we where already able to win in 2014”, Grasser is adamant, “ let´s see what we can do this time.”