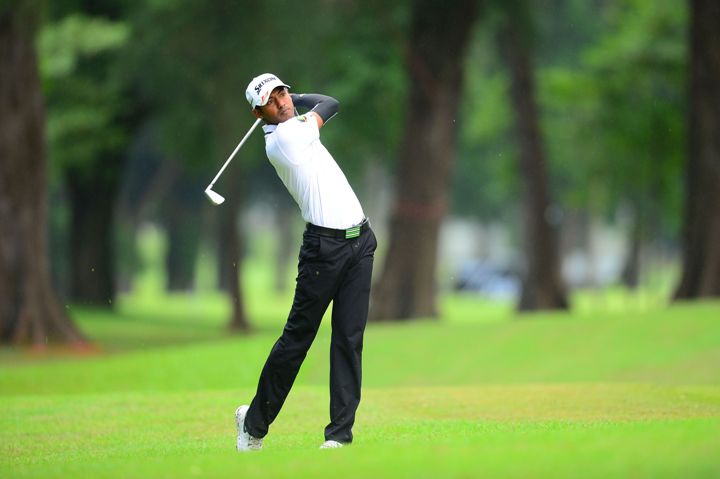 American John Michael O’Toole returned with the day’s best score of five-under-par 66 to grab a one-shot lead at the halfway stage of the PGM Clearwater Masters on Thursday.

Finland’s Janne Kaske, Thailand’s Jakraphan Premsirigorn and Malaysia’s R. Nachimuthu settled a further shot back in fifth following respective rounds of 68, 68 and 69 in what is the sixth stop of the ADT schedule this season.

O’Toole, who is the cousin of reigning ADT Order of Merit champion Casey, credited his exquisite ball-striking and accuracy off the tee for a splendid round which put him in the lead for the first time on the region’s premier Tour.

“I drove the ball really straight today. I hit it solid off the tee and I only missed three fairways. That gave me some confidence in attacking the pins. I hardly missed the greens too. I putted solid, especially on the fourth hole where I sank a 20-footer to save par,” said O’Toole.

“I am glad to put myself in good position after 36 holes. I have been playing in Asia since after Christmas. I stay with my cousin Casey in Bangkok. Both him and Iain Steel (former ADT winner) have been giving me a lot of good advices in my game. I am happy to see some good results,” added O’Toole, who turned professional in 2013.

Thai teenager Ekthumrong, 17, kept his hopes of winning his first ADT title alive after wielding a hot putter en route to a commendable round where he holed a 30-footer for birdie on the par-four fifth hole for his longest putt of the day.

“Everything went well for me today. My tee shots and approach shots were good and I putted exceptionally well. This is a very difficult course. I am happy with how I played the last two rounds. I am looking forward to the next two rounds. Hopefully I can keep up my good form,” said Ekthumrong, playing in his first year on the ADT.

Shaaban, who returned with a flawless round highlighted by four birdies, drew upon the positives of his win on the local circuit last week to keep up his chase for a breakthrough ADT victory.

“I am playing with good confidence right now, especially after winning last week. I putted solid today. I will do my best again tomorrow and hopefully I can stay consistent. You got to drive the ball really well here. Tee shots are very important,” said the 35-year-old Malaysian.

A total of 58 players made the halfway cut set at two-over-par at the PGM Clearwater Masters, which allows players to earn Official World Golf Ranking (OWGR) points to qualify for the Olympic Games taking place in Rio de Janeiro this August.