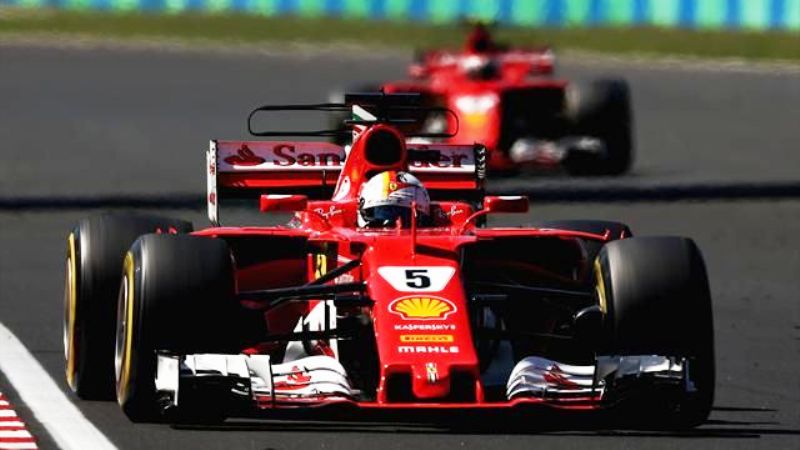 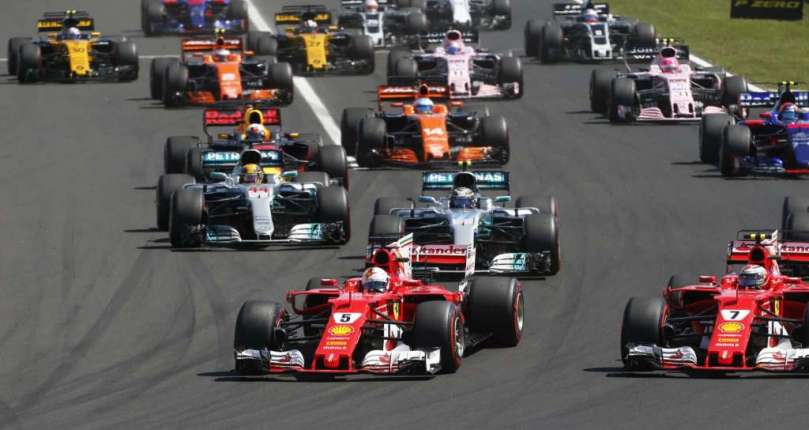 Sebastian Vettel increased his drivers’ world championship lead to 14 points on Sunday when he led Kimi Raikkonen home in a dominant Ferrari one-two at the Hungarian Grand Prix.

In his 50th race for Ferrari, the four-time champion German controlled the contest from pole position in stifling heat to reel off his first win in five races since the Monaco Grand Prix.

His main title rival Lewis Hamilton of Mercedes finished fourth, after handing a podium finish back to his team-mate Valtteri Bottas on the final lap following a late switch to enable the Briton to attack the two Ferraris.

Dutchman Max Verstappen finished fifth for Red Bull after surviving an opening lap collision with his team-mate Daniel Ricciardo that saw the angry Australian forced into an early retirement, forcing the deployment of the Safety Car.

Two-time champion Spaniard Fernando Alonso came home sixth and recorded the fastest lap of the race for McLaren-Honda after a stirring and often remarkable drive.

Vettel, who started the day just a point ahead of Hamilton, increased his lead by another 13 after 11 of this year’s 20 races as the circus takes a now-traditional three-week European summer holiday before the Belgian Grand Prix.

It was Ferrari’s first one-two in Hungary since 2004, when seven-time champion German Michael Schumacher triumphed ahead of Brazilian Rubens Barrichello, the last season in which the race winner in Hungary went on to win the drivers’ title.

“I’m over the moon,” said Vettel. “It was really difficult. I had my hands full from three, four laps after the safety car. The steering started to go sideways.

“I stayed off the kerbs, tried to save the car. I didn’t do any favours to Kimi, who could go faster and I really had to stay focused the whole race.

“I was hoping for a couple of laps to breathe, but they didn’t come. I don’t know what happened. We’ll have a look — but it doesn’t matter now because we won the race!”

Raikkonen, cheered by a huge following of Finns in a sell-out crowd at the sweltering Hungaroring, said: “Unfortunately, I couldn’t give them the win. I had a good start, but didn’t want to force the issue.

“After that I just kept following. Not ideal, I want to win, but it’s great for the team.”

Bottas, who was also given a resounding reception, said: “I was getting a little bit worried as the gap was increasing, but really, thanks to Lewis to keep the promise and let me by.”

On a very hot afternoon with a track temperature of 55 degrees Celsius, and the air at 30, the two Ferraris made a clean start to lead ahead of Bottas while, behind them, the first lap featured mayhem and a Safety Car intervention.

At Turn One, Frenchman Romain Grosjean’s Haas collided with German Nico Hulkenberg’s Renault before, at Turn Two, the two Red Bulls collided when Verstappen over-steered into his team-mate.

After spinning and surviving, Australian Ricciardo immediately had to park his damaged car with fluid pouring.

And he had some harsh words for his young team-mate.

“He doesn’t like it when a team-mate gets in front of him… A very poor mistake.”

Verstappen was given a 10-second penalty.

As the race resumed, Hamilton attacked but Verstappen defended robustly.

Verstappen led the race during the pit-stops before he finally pitted after 42 laps and, after serving his penalty, rejoined in fifth.

Under team orders, Bottas let Hamilton through on lap 47 to launch a charge at the Ferraris, reassured that he would be given back third if the Briton did not pass a Ferrari.

By lap 56, Hamilton was within a second of Raikkonen, but unable to close in the turbulent air without losing grip.

As promised, on the final lap, he let Bottas through to take third.

“I am a man of my word,” said Hamilton. – Agence France-Presse