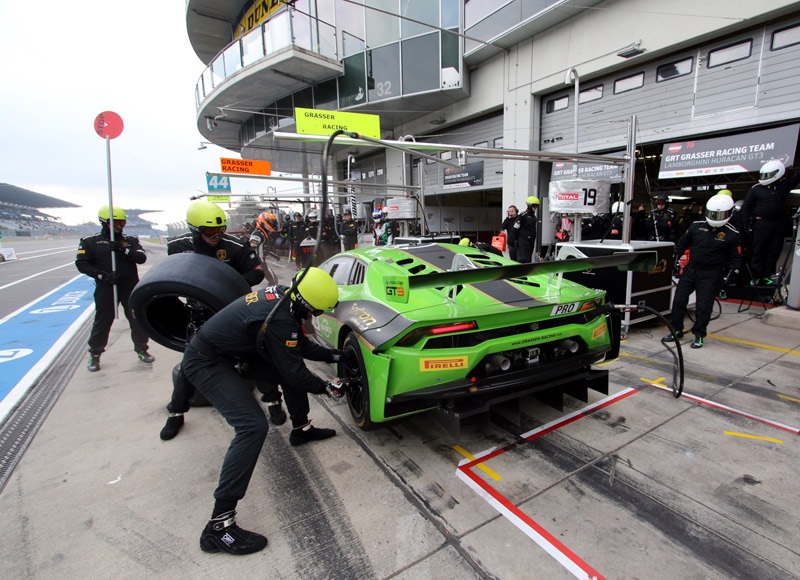 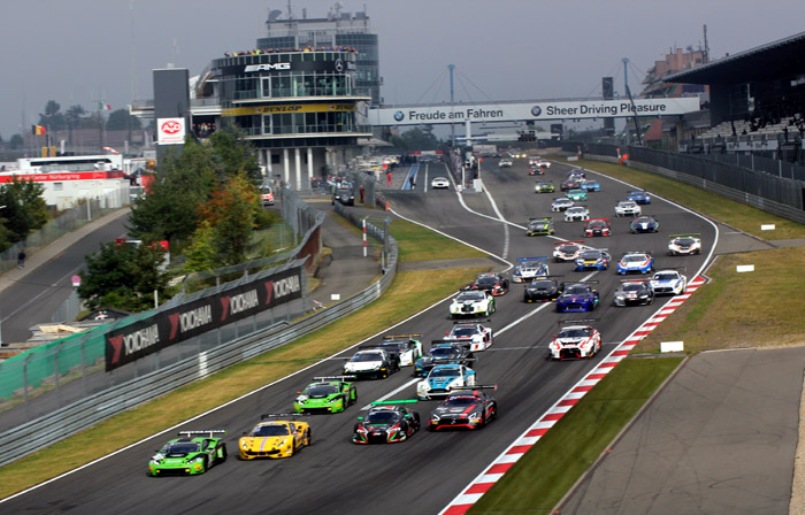 Finally there were scenes of joy and celebration again in the garage of GRT Grasser Racing: Winning the final race of the Blancpain GT Endurance Series at Nürburgring with Mirko Bortolotti, Rolf Ineichen and Christian Engelhart the team managed to overcome the slightly disappointing period of a few difficult weekends in an impressive manner.

Already during practise GRT Grasser Racing was showing to be able to be really competitive again. In prequalifying Mirko Bortolotti already set the best time, rising high hopes of course for qualifying, which had to be postponed a few times on Sunday morning due to typical foggy Eifel weather. In the end only one session could be run and there the Italian was hit by bad luck. In the drying track which got faster lap by lap, he was on clear course for pole position “when I hit frafic in the last corner and had to slow down significantly.”

There was no time for another try as the session was red-flagged with 50 seconds to go after one car had gone off-track – a decision that caused a lot of discussions between teams and drivers. So Bortolotti ended up “only” in fifth position, but Luca Stolz was there to make up for the lost chance for Grasser Racing. His timing was perfect and so he put the Lamborghini Hurracan number 16 on pole, quite to the surprise of some of the pundits in the paddock. “Of course this was great”, he said just before the start of the race, but he was also a little bit careful:

“But now we have to bring it home over the three hour race to get a really good result in the end.” Which they actually did as Stolz finished in sixth position together with his teammates Michele Beretta and Andrea Piccini in P6.

The German immediately took the lead at the start, with Bortolotti lining up directly behind him after a perfect get away. “Going from P5 on the grid to P2 in one go of course feels great. But I managed to get a perfect start, managed to get through the first corner huffing and puffing that always seems to happen the optimum way. At the re-start after a safety-car period I was also able to pass Luca and put our car in the lead for the first time.”

Also Rolf Ineichen, who took over driver duties from Bortolotti during the first pit stop, could keep up in the top of the field: “We had a very good car all the time, tyre degradation was actually quit low, I could just do my laps. Inly in the end it got a bit difficult to go through all the traffic, as some people simply don´t seem to see any blue flags. But I tried to always stay calm. Before the race Christian and I had talked a lot about where to overtake, where better try at all.”

The Swiss, who already had shared the top spot on the podium in ADAC-GT-Masters with Engelhart, who made his debut inBlancpain GT Series for Grasser at Nürburgring, was adamant about how much he owes to his teammate. “He taught me nearly everything I know about racing.”

Engelhart, who took over Jeroen Bleekemolen´s seat as the Dutchman was busy in the US this weekend, faced the difficult task of defending the lead during the final stint against the very strong WRT-Audi of Laurens Vanthoor, who desperately needed a win to claim the Team Championship for WRT and pushed accordingly. But the Blancpain rookie kept his nerves under control and crossed the finish line first in his Grasser Lamborghini.

“To be able to celebrate my Blancpain debut with a a victory is of course fantastic, a very special feeling. The team went through such a difficult year, working so hard but often hit by a lot of bad luck. Now we finally we got our reward.”

Team principal Gottfried Grasser was ever so happy: „It has been a fantastic weekend. This time everything went right for us. Pole, victory and both cars finishing within the Top Six. I am really content but honestly U actually expected a better result here at Nürburging compared to the last races.” Mainly because the team had managed to understand the difficulties of the recent weeks: “We analysed the problems of the car in every detail and come to the conclusion over and over again that it was temperature related. The hotter it got, the more problems we got. We now understood the reason for it and will work on it for 2017 to get something new homologated. I really want to send a big thank you to all the drivers and the whole crew. It is unbelievable how these guys stick together, go through highs and lows and show a great performance whenever it really counts. Thanks to everybody! Now we are looking forward to Blancpain Sprint Final in Barcelona and the ADAC GT Masters Final at Hockenheimring! In Hockenheim we expect quite low temperatures, so we should be really competitive there.”