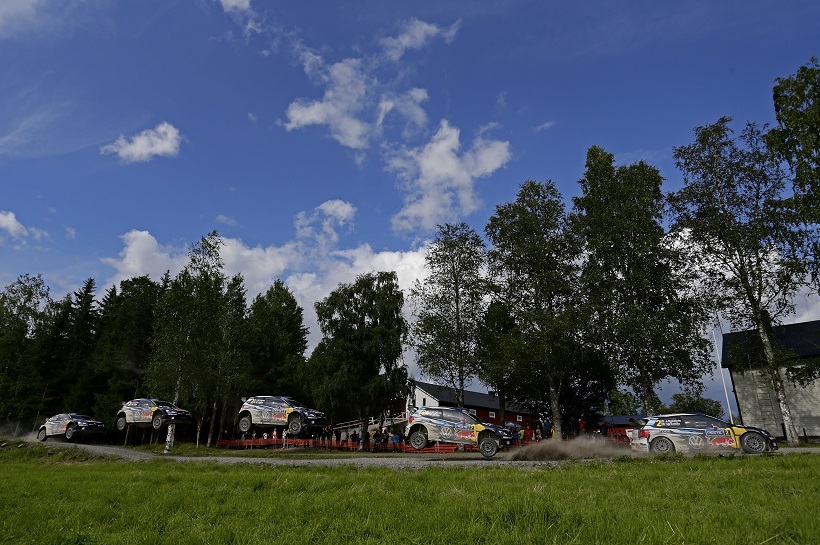 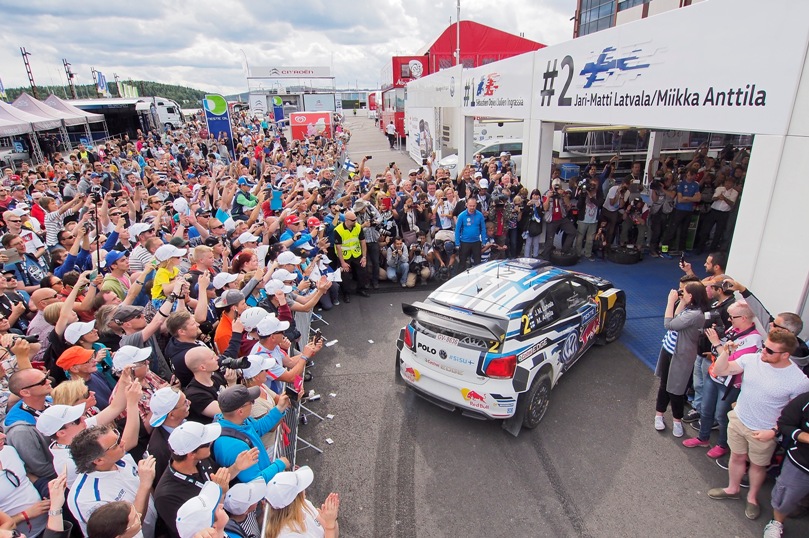 Thousand jumps in the land of a thousand lakes – Volkswagen is all set for the next big push, as its three winning duos take on the Rally Finland. The next event on the FIA World Rally Championship (WRC) calendar, from 28 to 31 July, is the fastest rally of the season. Following the rally in Poland, the race in Finland forms the second of two back-to-back high-speed rallies.

Each of the Wolfsburg-based manufacturer’s three works duos – Sébastien Ogier/Julien Ingrassia (F/F), Jari-Matti Latvala/Miikka Anttila (FIN/FIN) and Andreas Mikkelsen/Anders Jæger (N/N) – has one at least one of these full-throttle rallies at some point in the past three years. The result is that the Polo R WRC is undefeated in both Poland and Finland.

Jari-Matti Latvala/Miikka Anttila have contributed to this impressive record with victories at their home race in Finland in both 2014 and 2015. The goal is to complete the hat-trick in 2016. To do so, they must first complete a total of 333.60 kilometres flat-out against the clock, spread over 24 special stages on firm, almost asphalt-like gravel.

“Over 70 jumps and more than 30 seconds in the air – these are the figures from just one single stage at the Rally Finland, the infamous ‘Ouninpohja’,” says Volkswagen Motorsport Director Jost Capito. “The drivers and co-drivers must be both accurate and intelligent to master this unique challenge. The role of the driver is more important in Finland than at pretty much every other rally. We go into the second half of the season with the assurance that all three of our Volkswagen duos has won at least one rally already this year – and are thus in top form. As well as that, however, we will also take extra motivation from the fact that the Polo R WRC is still undefeated at high-speed rallies, such as the recent race in Poland and now here in Finland.”

Drift, jump, full-throttle, … repeat – the feature of the Rally Finland

In 2015, the Rally Finland went down as the fastest WRC rally of all time. An average speed of 125.44 km/h – no other driver/co-driver pairing had ever been as quick as Jari-Matti Latvala and Miikka Anttila before. Nor had the closing Power Stage ever experienced such speed: a remarkable average of 135.25 km/h was also a new record – courtesy of Sébastien Ogier and Julien Ingrassia. The high tempo, which has earned the Rally Finland the nickname “Formula 1 in the Forest”, requires the drivers to be as accurate as possible. However, this nickname is misleading in one sense: while the angle of drift in Formula racing never usually reaches more than four degrees, angles of between ten and 15 degrees are part and parcel of an average day’s rallying. As such, it is important to position a world rally car as precisely as possible before any jump. Once all four wheels are in the air, the driver and co-driver are reduced to mere passengers for split seconds. In 2013, the world rally cars took off over 70 times on the infamous ‘Ouninpohja’ stage. The air time amounted to more than half a minute. For this reason, absolute accuracy is a must at about 200 km/h.

The Latvala effect – two home wins in a row, three in total

Currently on a par with Juha Kankkunen, victory at his home race would see Jari-Matti Latvala match another two Finnish rally legends. Should he add a fourth win in Finland to his collection, Latvala would pull level with Hannu Mikkola and Tommi Mäkinen in the all-time winners list at the Rally Finland. Markku Alén has six wins to his name, while Volkswagen test and development driver Marcus Grönholm has won a remarkable seven times in Finland. The combination of Latvala, Anttila and Volkswagen has been the one to beat since 2014: the Finnish duo has triumphed with the Polo R WRC for the past two years.

Mr. Momentum – Mikkelsen arrives in Finland with the wind in his sails

Andreas Mikkelsen and Anders Jæger achieved something unique at the recent Rally Poland – they are the only duo to have won a gravel rally from one of the first three starting positions in 2016. Fortune favoured the brave when Andreas Mikkelsen claimed his second WRC victory alongside co-driver Anders Jæger. This win has given the two childhood friends an extra boost of confidence and motivation ahead of their outing in Finland. Their goal: to make it onto the podium in Finland for the first time in their careers. Up to now, Mikkelsen’s best result in Finland is fourth place in 2014.

Championship leader, for the 30th time in a row: Ogier goes into second half of season with comfortable lead

Top dog since March 2014 and 30 WRC rallies in a row as championship leader – Sébastien Ogier and Julien Ingrassia lead the world championship going into the second half of the season, 51 points clear of their closest rivals Andreas Mikkelsen/Anders Jæger. 25 points are up for grabs for a win, with a further three points available for the fastest car on the Power Stage. With the championship lead comes the dubious honour of opening the route. The more stringent rules introduced in 2016 have made it virtually impossible to win a gravel rally as the first car onto the route. Should they win on Sunday, this would be the world champions’ second victory in Finland, having previously triumphed in 2013.

The regulations of the FIA World Rally Championship (WRC) stipulate that the 1.6-litre turbo engines in the world rally cars must not exceed a speed of 8,500 rpm. This is a crucial factor at the Rally Finland. Only those who get as close as possible to this limit on the long, flat-out sections – without exceeding it – will get the best out of their car. Should they exceed this limit, the fuel injection must be electronically deactivated. Here is the crunch: when the world rally cars go airborne over the countless jumps, the lack of resistance means that the engine speed does rise above the magic number, and the fuel injection cuts out. However, the optimum speed should be restored before the car lands, in order not to lose any drive or time.

Quotes ahead of the Rally Finland

Sébastien Ogier, Volkswagen Polo R WRC #1
“The Rally Finland is unquestionably one of the highlights of the year. I love driving there, because rallying is everything in Finland. I am also looking forward to Finland, because the Finns manage to produce perfect route conditions. The roads are not only beautiful, but are tailor-made for rallying. The starting order has denied me any realistic chance of winning any of the gravel events this year. As such, the weather situation will also play a major role again in Finland. Let’s wait and see, and keep our fingers crossed that it is nice and damp. Admittedly, what matters most in the end is that we defend our title. We are looking good in that regard at the moment, but it would be nice to have another fair shot at winning a rally in similar conditions. Particularly as the series is blessed with some very strong drivers at the moment.”

Jari-Matti Latvala, Volkswagen Polo R WRC #2
“The Rally Finland is obviously the highlight of the season for me. I am really looking forward to it, even though the pressure is naturally greater than at any other rally. That can also serve as a motivation, as you obviously want to do well in front of your home crowds. The expectations of the Finnish fans are huge, particularly as I have only won once so far this year. The characteristics of the rally suit me. Fast gravel roads and big jumps – that is my kind of rally. The keys to this rally are ensuring the pace notes are correct and choosing the right line for jumps and fast sections. I will relax ahead of my home race in a very Finnish manner – in the sauna.”

Andreas Mikkelsen, Volkswagen Polo R WRC #9
“The way I see it, it will not be easy to repeat our victory in Poland at the Rally Finland. The rally has a completely different character. The surface is much harder and there are many more crests and jumps. On the whole, the rally is far more demanding than the one in Poland. It is particularly important to get the pace notes spot on. As such, we will focus hard during the ‘Recce’ to get the pace notes as accurate as possible. Because there are a lot of blind crests, you need to know exactly what to expect on the other side. That then gives you the confidence you need to be fast. One of the new features this year will be the ‘Ouninpohja’ stage, which we will drive in the opposite direction to recent years. That will add a bit of extra spice to the occasion.”

Over 430 million people reached – this is Volkswagen’s current status on the brand’s official motorsport presence on Facebook since the Wolfsburg-based manufacturer made its debut in the World Rally Championship in January 2013. Since then, it has enjoyed three and a half years of success in the top flight of rallying. Ahead of the Rally Finland, 5.2 million people have ‘Liked’ the online presence. In the 2016 season alone, an accumulated total of almost five million fans have been active on this channel, either by ‘Liking’ the page, sharing content or adding their own comments.