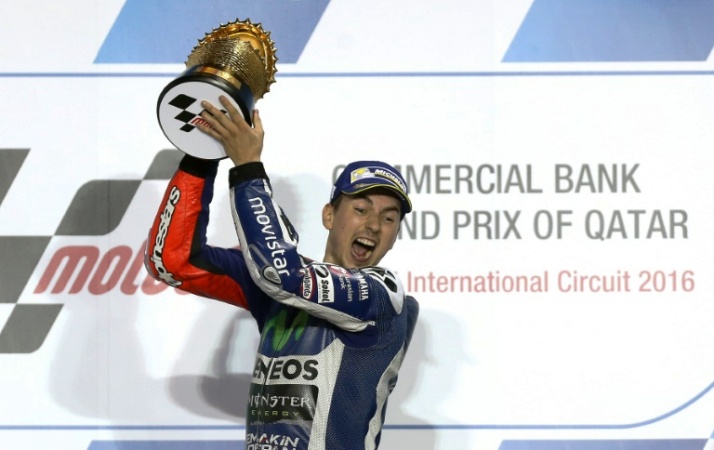 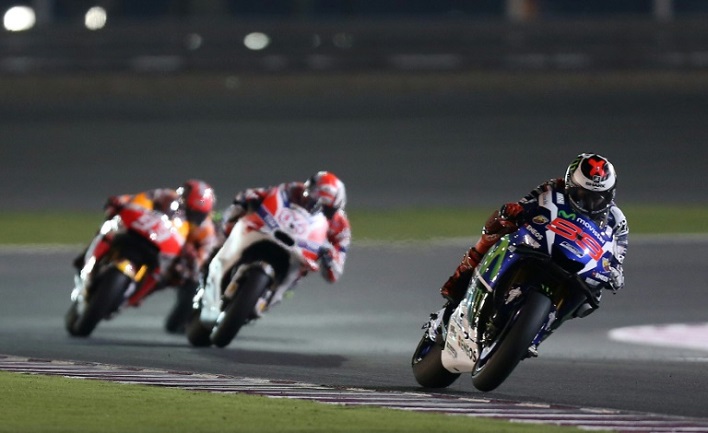 Defending world champion Jorge Lorenzo began his campaign for a fourth title by claiming victory in the season-opening Qatar Grand Prix on Sunday.

The 28-year-old Spaniard, who started on pole, won the floodlit race in the Gulf for a third time, with Andrea Dovizioso on a Ducati taking second, 2.019sec behind, and Marc Marquez on a Honda in third at 2.287sec off the pace.

Nine-time world champion Valentino Rossi was fourth on the second factory Yamaha with whom he had signed a new two-year deal on Saturday.

For Lorenzo, it was a 62nd career win and 41st in the elite class, coming at the circuit where he made his debut in 2008.

Lorenzo had lost first place at the end of the opening lap to Ducati’s Andrea Iannone but the unpredictable Italian’s race ended on the sixth lap when he crashed out spectacularly at turn 13 at the Losail track.

That briefly allowed Ducati teammate Dovizioso to snatch the lead but with 14 laps of the 22-lap race to go, Lorenzo charged through to take back the lead which he never relinquished.

Two-time world champion Marquez slipped past Dovizioso with four laps left but the Italian pulled off a spectacular pass on the penultimate lap to make sure of second spot.

Lorenzo, who won the 2015 world title at the season finale in Valencia, said his last-minute decision to switch tyres from hard to soft was key to victory.

“This race has been one of the best of my whole career and that was why I was able to win and could make this little difference in the last three laps that gave me the victory,” said Lorenzo.

“It was a little down and up with the tyres. We made the decision to put on the soft rear tyre, because with the hard one we couldn‘t be so fast.

“The harder compound should become better and better, but I think what happened was the opposite. The softer tyre should get worse and worse, but it was faster and faster so this little difference was the difference between me and Dovizioso and Marquez.”

Dovizioso had started at six on the grid and gave an indication of the title-challenging qualities of Ducati who have been linked with a move for Lorenzo next season.

“It’s always hard to fight with Marquez at the end of the race but my engine really helped me,” said Dovizioso.

“We did some good testing in the winter and this result continues that work.”

Marquez said he was satisfied with third spot on a circuit which is not traditionally friendly to Honda.

“The race was faster than we expected and we had a great weekend, because we got 100% out of our performance at a circuit that we find hard,” said the Spaniard.

“I spent much of the race behind Dovizioso because I couldn’t pass him, and it was difficult to make up the ground lost with his better acceleration on the straight. Whenever I got close, I’d lose him again.”

Luthi, who was 125cc world champion in 2005, finished ahead of Spain’s Luis Salom, also on a Kalex, and Italy’s Simone Corsi on board a Speed Up machine.

Niccolo Antonelli on a Honda won the Moto3 category. The 20-year-old Italian came in first just a fraction of a second ahead of South Africa’s Brad Binder on a KTM. – Agence France-Presse