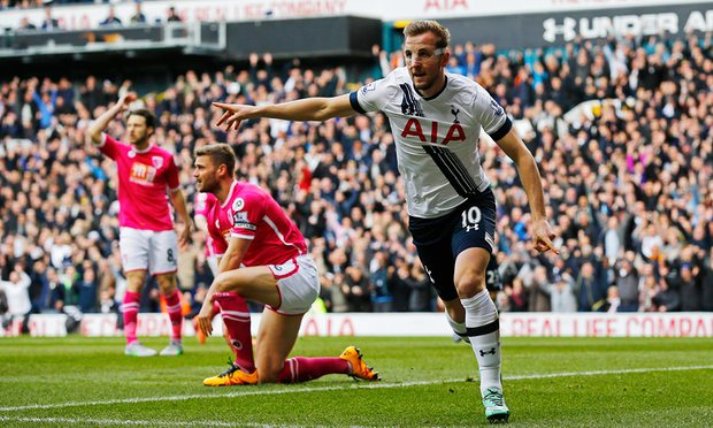 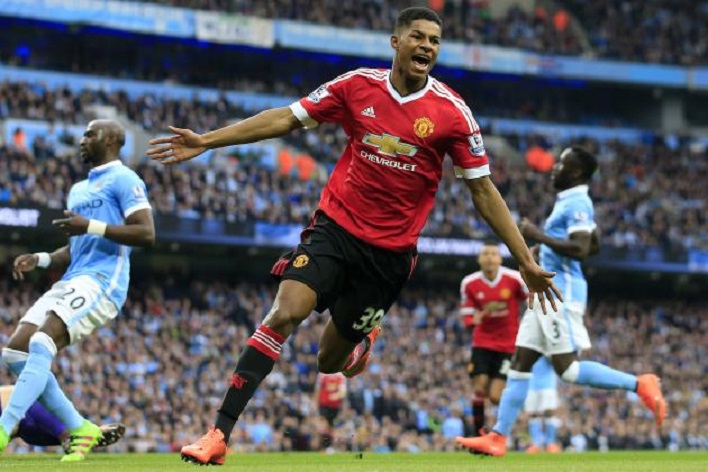 But Manchester City’s title ambitions were dealt a likely fatal blow in a 1-0 home defeat by Manchester United in which Manuel Pellegrini’s side lost both Joe Hart and Raheem Sterling to injury.

The result, courtesy of 18-year-old striker Marcus Rashford’s 16th-minute strike, left City 15 points behind Leicester in fourth place and took Louis van Gaal’s United to within a point of the Champions League places.

“Today was one of the best performances of the season,” said Tottenham manager Mauricio Pochettino.

“We have seven games ahead and when the players come back from the national teams, we hope it is with a good spirit.”

Leicester had provisionally gone eight points clear with a 1-0 win at Crystal Palace on Saturday, but it took Kane just 43 seconds to settle Spurs’ nerves against Bournemouth at White Hart Lane by sliding in to convert Kyle Walker’s cross.

It was the England striker’s 20th goal of the campaign and he made it 21 in the 16th minute by applying a polished finish to Dele Alli’s pass.

Kane was denied a hat-trick by Bournemouth goalkeeper Artur Boruc in the 52nd minute, but Christian Eriksen followed in to score and seal a win that lifted Spurs six points above third-place local rivals Arsenal.

City are four points further back in fourth and while they, like Arsenal, retain a game in hand on the pace-setters, their title challenge now appears over.

Rashford was United’s match-winner at the Etihad Stadium, the youngster skinning the hapless Martin Demichelis and planting a shot past Hart in the 16th minute to become — at 18 years and 141 days — the youngest scorer in the fixture’s 171-game history.

Sterling hobbled off with a groin injury midway through the first half and Hart was stretchered off with a calf problem early in the second half to complete a miserable day for manager Pellegrini, whose side are also under threat from West Ham United.

“We did not deserve to lose,” said Pellegrini, who predicted that Hart and Sterling would be out for “three or four weeks”.

“We dominated the game from the first minute. We were the only team who wanted to play the whole game, but we missed three or four chance to score.”

On City’s ambitions for the rest of the campaign, he would only say: “We continue in the fourth position. We have another 24 points to play.”

It was a rare day to remember for under-fire United manager Van Gaal, whose team ended a four-game winless run to rekindle their hopes of Champions League qualification.

“I am a very proud manager today,” said Van Gaal.

“This victory was necessary. The gap was four points and now is one point, plus we are equal with West Ham, which is important.

“Rashford is very quick and Demichelis looked like the years are catching up with him. He was a very good defender. He was my centre-back in Bayern, but that is the life of football.”

Seeking a seventh successive win over Newcastle, Sunderland took the lead through Jermain Defoe in the 44th minute.

But with seven minutes remaining, Georginio Wijnaldum crossed for Serbian striker Mitrovic to score with a downward header, sparing Newcastle manager Rafael Benitez from suffering defeat in his first home game and keeping both teams in the bottom three.

“The players fought till the end and the fans were behind us in a difficult situation,” said Benitez.

“We have to do this from the first minute to the last to get more points. I think we can stay up.”

In the day’s other early game, substitute Sadio Mane scored twice — and squandered a penalty — as Southampton checked Liverpool’s charge towards the top four by storming back from 2-0 down to win 3-2 at St Mary’s.

Jurgen Klopp’s Liverpool went 2-0 up inside 22 minutes, Philippe Coutinho curling in a fine effort from 25 yards and Divock Origi teeing up Daniel Sturridge to score.

But after seeing a penalty saved by Simon Mignolet, Mane reduced the arrears in the 64th minute and after Graziano Pelle had equalised, the Senegal international drove home an 86th-minute winner. – Agence France-Presse