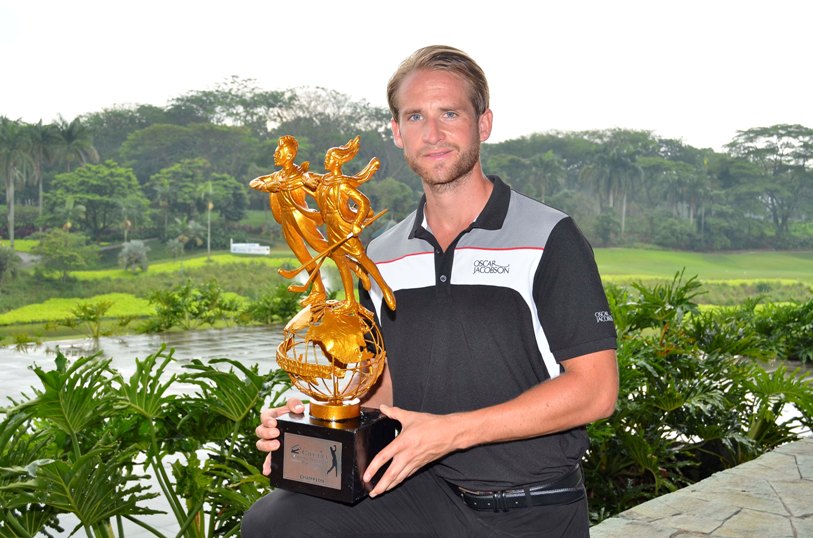 Sweden’s Oscar Zetterwall enjoyed the victorious feeling for the second time in four months when he pipped American Johannes Veerman in a play-off to win the US$100,000 Ciputra Golfpreneur Tournament presented by Panasonic on Saturday.

Zetterwall shrugged off Veerman’s challenges by sinking a birdie at the first play-off hole to win his second Asian Development Tour (ADT) title event following his breakthrough in the Philippines in April.

“This victory means a lot to me. I’ll climb up the Order of Merit and bring myself closer to securing my Asian Tour card,” said Zetterwall, who moved up to fourth place on the money list.

After missing out on his opportunity to earn his Asian Tour card at Qualifying School in January, the Swede was more determined to make amends by playing well on the ADT.

His efforts paid off again but not after surviving several heart-stopping moments at the BSD course by Damai Indah Golf.

“I was one-over after six holes and I knew I had to focus well to have any chance of winning this week.

“I managed to make two birdies on seven and eight and went further ahead with three birdies in four holes after the turn,” said the Swede of his final round three-under-par 69.

Zetterwall then opened the door for Veerman when he double-bogeyed 14.

The American made three birdies in his last four holes to force a play-off with Zetterwall after they finished regulation play at 20-under-par 268.

It was the Swede who finally prevailed when he sank an exquisite birdie on the par-five 18 play-off hole as Veerman could only manage a par.

“I hit a good shot down the middle of the fairway. I then used a six-iron to get within 12-feet of the pin and it was a joy to watch my birdie putt sink into the hole,” said Zetterwall.

*Zetterwall won in the first play-off hole with a birdie