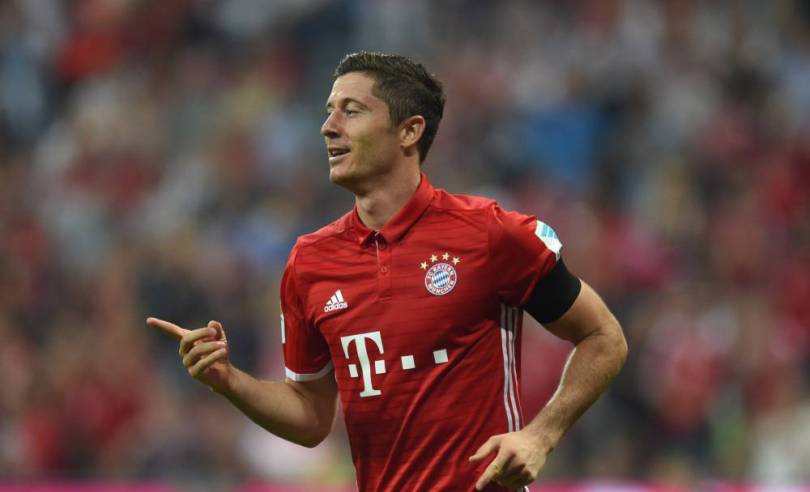 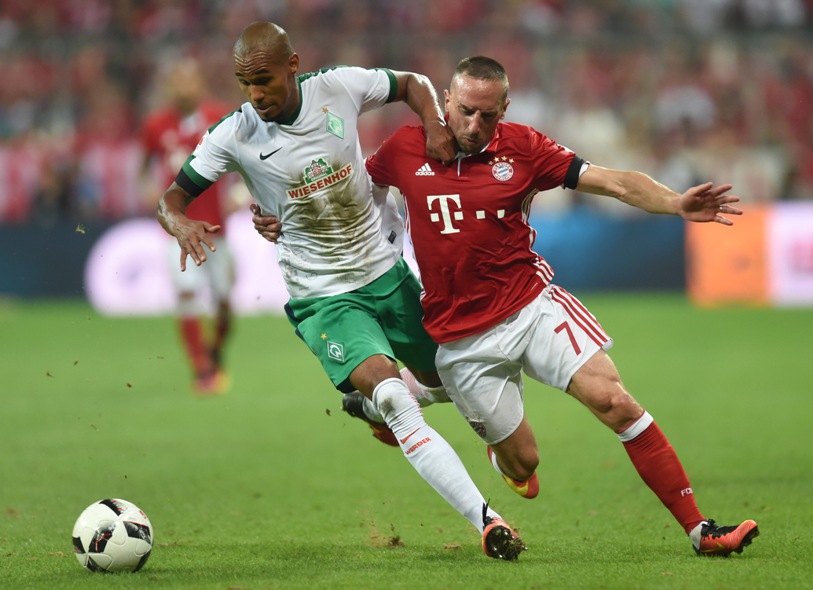 Lewandowski, the Bundesliga’s top-scorer last season with 30 goals, could have finished with five as Bayern ran riot.

“I’m just happy I scored and that we got the win,” Lewandowski told broadcaster ARD and revealed he finished the game with a hole in his goal-scoring right boot.

After Xabi Alonso scored the first goal of the 2016/17 campaign at Munich’s Allianz Arena, Lewandowski netted either side of the break before captain Philipp Lahm added a fourth.

It was no more than shooting practice for Bayern by the time Franck Ribery fired home, with Lewandowski then converting a penalty to claim his third and Munich’s sixth.

Having also hammered Hamburg 5-0 in last season’s opening game, this was another emphatic win as Bayern look to win a fifth Bundesliga title in a row.

It finished 2-0 at the break, but it could have been at least double that as Lewandowski and then Thomas Mueller both hit the woodwork in the opening 45 minutes.

They picked up under new coach Carlo Ancelotti where they left off under Pep Guardiola, who left in May to coach Manchester City, with long periods of possession.

“I am very happy. That was a very good performance from my team,” said Ancelotti after his first Bundesliga game.

“We got off to a good start and took control of the game early on.”

New signing Renato Sanches from Benfica, a Euro 2016 winner with Portugal, started on the bench.

Alonso’s volley from just outside the area found the top right-hand corner and flew past Bremen goalkeeper Felix Wiedwald.

Ribery’s long-range pass down the left put Lewandowski in behind the defence and the Poland hot-shot tucked his shot past Wiedwald from the tightest of angles.

He could have claimed a first-half hat-trick.

Muller’s long-range shot slammed off the post, then Lewandowski hit the crossbar and had a shot saved before the break.

The pair combined for Bayern’s third goal, which arrived just 39 seconds into the second-half.

Mueller’s curling cross was met at the far post by Lewandowski for his second on 46 minutes.

Bremen’s last win over Bayern in Munich was back in 2008 and they were barely in it as Bavarians enjoyed around 70 percent possession.

Lahm grabbed Bayern’s second when he converted Mueller’s final pass before Ribery blasted home their fifth with the Frenchman unmarked in the area.

Rafinha came on for Lahm and when the Brazil defender was fouled in the area, Lewandowski drilled home the resulting penalty on 77 minutes.

It was his second hat-trick in exactly a week after he netted three in Bayern’s 5-0 romp at Carl Zeiss Jena in the first round of the German Cup last Friday. – Agence France-Presse