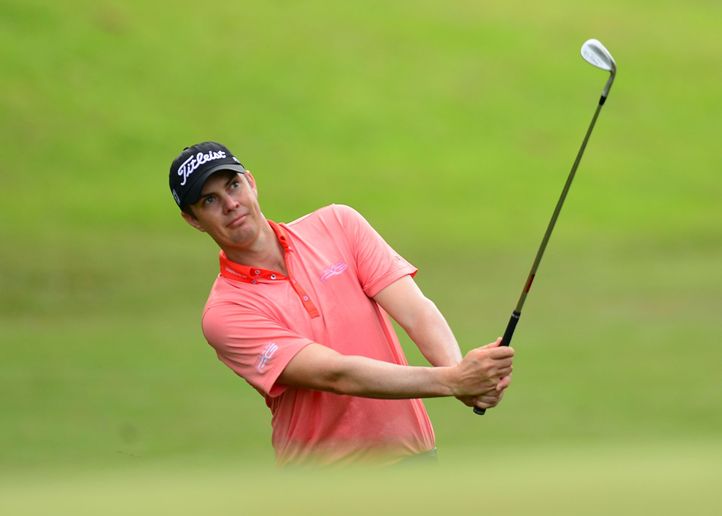 Australian Adam Blyth and Thailand’s Wisut Artjanawat shared the penultimate round lead at the PGM Penang Championship on Friday.

Blyth, playing on a sponsor’s invite this week, signed for a five-under-par 67 while Wisut, a one-time Asian Development Tour (ADT), returned with a 66 to lead by one-shot on 14-under-par 202 total at the Penang Golf Club.

American John Michael O’Toole, who broke the course record earlier with an opening 64, returned with a 66 to take third place while overnight leader Nick Sherwood (70) of the United States slipped to fourth on 204 at the RM200,000 (approximately US$46,600) event.

Order of Merit leader Pavit Tangkamolprasert of Thailand, who is chasing for a record sixth victory on the region’s burgeoning Tour, sits a further shot back in fifth following a 68.

Blyth, who trailed by one heading into the round, started his day with two straight pars before rolling in a 35-footer for eagle on third and going on to birdie all the par-threes for the first time in his career. His only bogey came on the par-four seventh.

“I got off to a great start with the eagle on third. I also birdied all the par-threes which I thought was pretty cool. My girlfriend, Nicole, is doing a fantastic job, keeping me focused but very relaxed. We had a great time out there and we are loving Penang too,” said the 34-year-old Australian.

“I played really solid today. I am really looking forward to playing another 18 holes out there. I have a great game plan so I just have to stick to it and worry about myself,” added Blyth, who played regularly on the Asian Tour for close to 10 years before switching his focus to his domestic circuit two years ago.