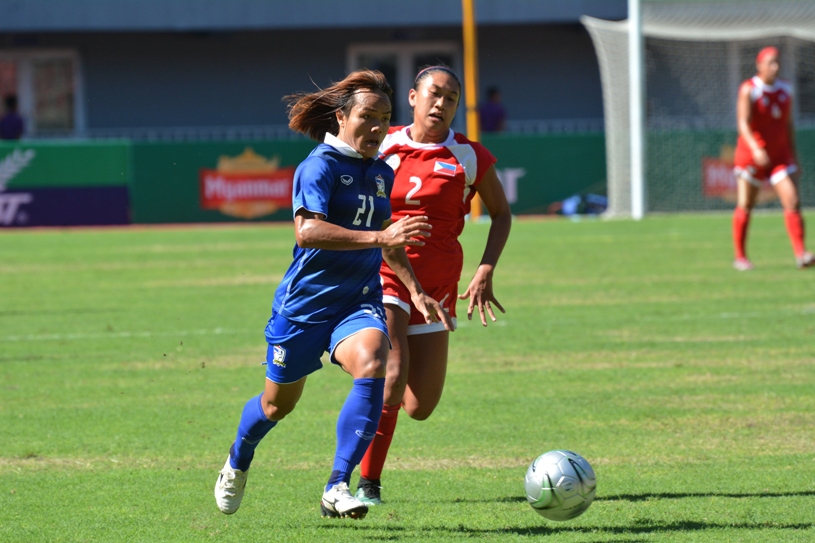 It was a hot start for defending champs Thailand when they downed the Philippines 4-0 in the opening match of the AFF Myanmar Women’s Championship at the Mandalar Thiri Stadium here today. The Thai girls were hardly affected by the sweltering conditions and went on to secure a crucial victory as they started their quest to retain the regional title. Thailand edged Myanmar in last year’s final.

The Philippines however almost surprised their illustrious rivals when Dolino Alesa Nazareno unleashed a sizzling shot from way out. The shot sailed over the Thai keeper but slammed against the crossbar. The just two minutes later, Silawan Intamee’s storming freekick was connected by Pitsamai Sornsai.

With some ten minutes on the clock, Thailand found themselves a second goal. Pitsamai was in the thick of action again when she broke away and crashed her shot in. In the dying minutes of the first half, Orathai Srimanee cut in the right but watched in despair as her shot veered off target. Thailand were on target on twice after the break, thanks to striker Kanjana Sung-Ngoen and Rattikan Thongsombut.

In the second Group A match held at the same venue later this evening, Vietnam went on a rampage and hammered 14 goals past a young Singapore team. The Vietnamese team were clearly all fired up from the word go and shot ahead after a few minutes. At the break, Vietnam had already reeled in a stunning seven goals, more were expected in the second half. By the end of the match, Vietnam had picked up another seven goals to settle the score at 14-0.

With their high goal count, Vietnam moves to the top of the standings. Thailand are second with Philippines third. Tomorrow, Australian Under-20 will face Malaysia in a Group B encounter with hosts Myanmar taking on Timor Leste. Judging from the huge turnout the Myanmar women’s team have attracted in their recent friendlies, the organisers are expecting somewhat of a bumper crowd tomorrow evening.