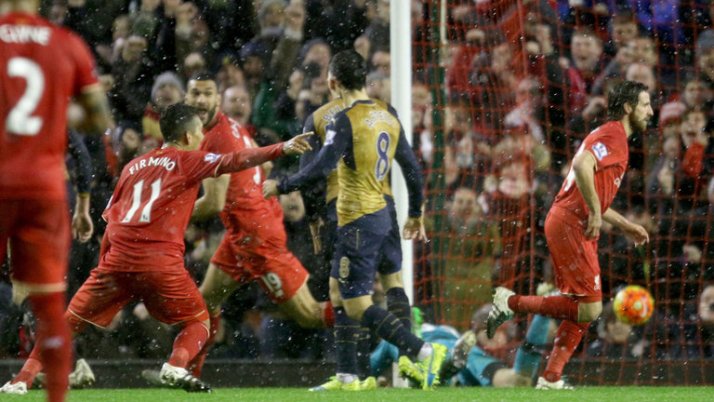 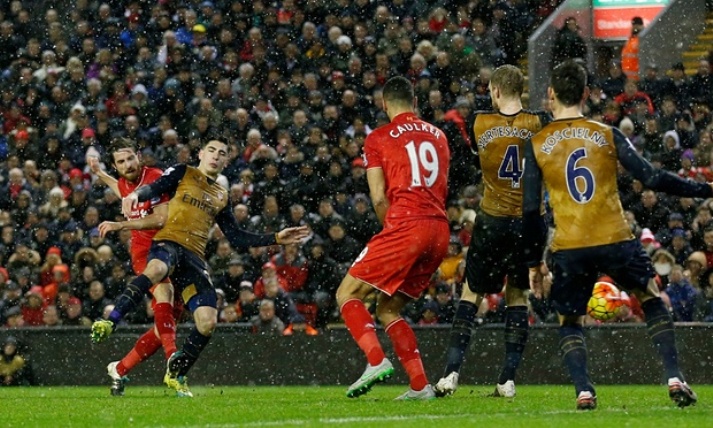 Joe Allen’s dramatic last-minute equaliser earned Liverpool a 3-3 draw at home to Arsenal on Wednesday that enabled Leicester City to move level on points at the Premier League summit.

The Welsh midfielder volleyed home in front of the Kop at a wintry Anfield to deny leaders Arsenal a victory that would have kept Arsene Wenger’s men two points clear at the top of the table.

Robert Huth scored an 83rd-minute winner as Leicester won 1-0 at fourth-place Tottenham Hotspur, while Manchester City remain three points off the pace in third after drawing 0-0 at home to Everton.

“I’m very disappointed, but overall I cannot fault the effort and commitment of the team,” Arsenal manager Wenger told the BBC.

“I felt we had an apprehensive start. We went 1-0 down and then we started to play. We come out of the game with a lot of positives, but still some regrets.”

Arsenal travel to Stoke City on Sunday and will do so still battling doubts about their title credentials after failing to protect the advantage given to them by Olivier Giroud’s 55th-minute goal.

Roberto Firmino was preferred to Christian Benteke up front by Liverpool manager Jurgen Klopp and he rewarded the German’s faith by slamming home a 10th-minute opener after Petr Cech parried a shot from Emre Can.

Aaron Ramsey equalised four minutes later, beating Simon Mignolet at his near post from Joel Campbell’s through-ball, only for Firmino to restore the hosts’ lead in the 19th minute, gathering a lay-off from James Milner and arcing a magnificent 25-yard shot into the top-right corner.

Giroud equalised in the 25th minute, toeing Ramsey’s corner past a hesitant Mignolet at the near post.

The France striker then committed an embarrassing miss, somehow diverting Theo Walcott’s low cross away from goal with the net yawning, before Firmino grazed the bar in first-half stoppage time.

Giroud atoned 10 minutes into the second half, collecting Campbell’s deflected pass and turning away from Kolo Toure before planting a shot past Mignolet for his 18th goal of the campaign.

But Allen had the last word in a breathless encounter, meeting substitute Benteke’s knock-down with an assured volley that nestled in the bottom-left corner.

“It’s an explosion of goals, but at the final whistle you cannot ignore there were problems,” Klopp told BTSport.

A late Harry Kane penalty had earned Tottenham a 2-2 draw with Leicester when the teams met in the FA Cup on Sunday, but Claudio Ranieri’s men claimed a measure of revenge thanks to Huth’s late goal at White Hart Lane.

The German centre-back was left unmarked to head home a Christian Fuchs corner, allowing Leicester to open up a seven-point advantage over their opponents, who are now just a point clear of fifth-place West Ham United.

“There’s so much work to do. We have to remain calm and believe in what we’re doing.”

Manchester City were left to curse Everton for the second time in a week, drawing 0-0 at the Etihad Stadium after losing 2-1 in the first leg of their League Cup semi-final last week.

“Everton didn’t create any chances. We had 17 shots, but for different reasons we didn’t score.”

Chelsea substitute Kenedy put Chelsea on course for victory in the 73rd minute after Craig Gardner had cancelled out Cesar Azpilicueta’s opener for the hosts, but McClean had the final say with a low, right-foot shot.

Jermain Defoe netted a hat-trick as Sunderland climbed to within a point of safety by winning 4-2 at fellow strugglers Swansea City, who are now just a point above the relegation zone.

After Defoe had given Sunderland a third-minute lead at the Liberty Stadium, a Gylfi Sigurdsson penalty and an Andre Ayew strike put Swansea 2-1 up.

But Swansea had had Kyle Naughton sent off for a high foot on Yann M’Vila in between and the visitors’ numerical advantage told in the second half as Patrick van Aanholt equalised before Defoe scored twice.

Goals from Shane Long and Dusan Tadic gave Southampton a 2-0 win over Watford.

Meanwhile, Jon Walters and Joselu scored and Ryan Bennett put through his own goal as Stoke won 3-1 at home to Norwich City, who replied through a screamer from Jonny Howson. – Agence France-Presse