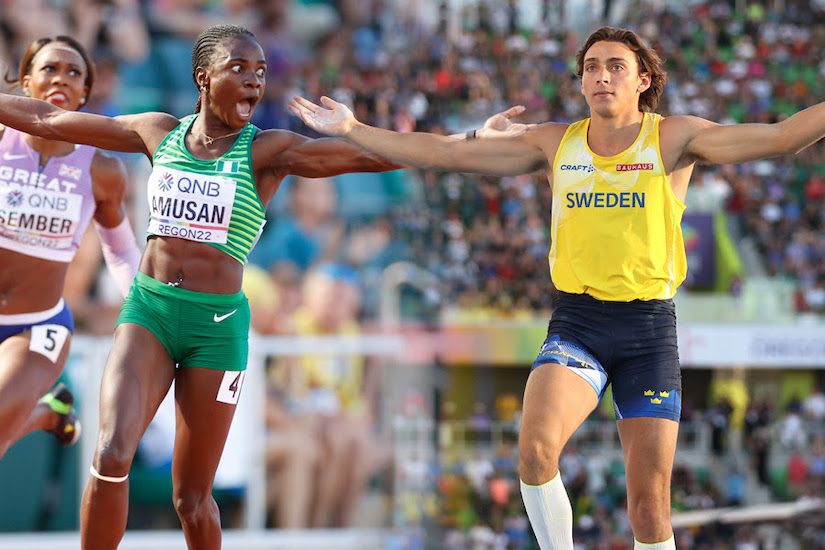 In many ways, it was the perfect final session of highly memorable championships.

On Sunday (24) at the World Athletics Championships Oregon22, the evening’s action got underway with perhaps one of the biggest shocks of the event. Nigeria’s Tobi Amusan sped to a world record* of 12.12 in the semifinals of the 100m hurdles, stunning her fellow competitors, the thousands of spectators in the stadium, and millions of fans watching on TV at home.

She duly went on to win the final in a wind-assisted 12.06 – not allowable for record purposes, given the following wind, but every bit as impressive as her earlier run.

At the other end of the session, the evening reached a crescendo when Mondo Duplantis scaled a world record* height of 6.21m in the pole vault.

The Swede, who set his previous world record when winning the world indoor title earlier this year, continued his undefeated run to win his first senior outdoor world title.

The two record-breaking performances were a fitting way to mark the end of the championships. During the 10 days of action, many titles have gone to the form book with established stars of the sport like Duplantis confirming their supremacy. In other disciplines, new stars – like Amusan – have emerged and made a big impact by winning their first global honours.

And in between those performances, hosts USA capped their best ever medal haul at a World Championships by winning the men’s and women’s 4x400m finals.

You could not write a more perfect ending

Tobi Amusan only got into hurdling through a quirk of fate.

Born in the town of Ijebu Ode in the western Nigerian state of Ogun, Amusan started out in athletics as a sprinter and long jumper. At the age of 13, she turned up to compete in a local athletics meeting, only to find that just one event remained on the programme: the hurdles.

Amusan’s coach encouraged her to enter. She ended up winning the race and the rest, as they say, is history.

She continued competing in sprints and long jump but managed to squeeze in one hurdles session a week. She put cones and tires on the track to jump over because there were no hurdles in her town.

When she was replaced as a member of Nigeria’s 4x100m squad at the trials for the 2014 African Youth Games, she figured she had nothing to lose and entered the hurdles. She won that and went on to earn silver at the African Youth Games in Botswana.

Then followed a trip to Ethiopia in 2015, where she won African U20 gold, followed by a breakthrough victory at the African Games in Brazzaville, Congo. Although she would be an U20 athlete for another full season, Amusan beat the best senior athletes on the continent.

“It was one of the biggest milestones of my career,” she said. “Winning that championship set me up for who I am today.”

There was no looking back; she was now a full-time hurdler.

In 2016, Amusan received a scholarship to attend the University of Texas, El Paso, (UTEP) where hard training brought her personal best down from 13.10 to 12.83. The latter was faster than the existing world U20 record at the time, though Amusan’s mark could not be ratified as a record.

At UTEP, she worked with new coach Lacena Golding-Clarke, a three-time Olympian from Jamacia and the 2002 Commonwealth Games 100m hurdles champion.

There were setbacks along the way, of course. At the U20 world championships in Bydgoszcz, Poland in 2016, Amusan struggled with her technique and finished in fifth place. She was so devastated that she thought about quitting the sport.

But she regrouped and, after reaching the semifinals at the 2016 Rio Olympics, Amusan went unbeaten in the 2017 outdoor US collegiate season and won the NCAA title in a PB of 12.57.

She went into the 2017 World Championships in London as the season’s fourth-fastest hurdler, but cramped up in the cold conditions and failed to make the final.

Amusan turned pro at the end of that year and went on to win gold at the 2018 Commonwealth Games in Gold Coast, Australia, at the age of 20. She also triumphed at the African Championships later that year.

In 2019, she finished just 0.02 shy of bronze at the World Championships in Doha. Last year, she came 0.05 from a medal at the delayed Tokyo Games.

Motivated by those near-misses, Amusan has attacked the 2022 season with renewed focus. From May onwards, she has finished in the top two in all of her races on the international circuit. She successfully defended her African title with a wind-assisted 12.57 and then broke her own African record when winning at the Wanda Diamond League meeting in Paris with 12.41.

When she improved that record in her heat at the World Athletics Championships Oregon22, it hinted that greater things could come in the following rounds.

Even so, her world record run of 12.12 in the semifinals – and her wind-assisted 12.06 to take gold in the final – both came as a surprise to everyone, Amusan included.

“The goal was to come out and to win this gold,” Amusan said. “I just did it. Honestly, I believe in my abilities but I was not expecting a world record at these championships.

The third son of former pole vaulter Greg Duplantis and former heptathlete Helena (née Hedlund), Armand ‘Mondo’ Duplantis was born into an athletic family. His older brothers Andreas and Antoine were introduced to pole vault at an early age; Andreas went on to represent Sweden, their mother’s country of birth, at various age-group championships, while Antoine dropped pole vault in favour of baseball.

Armand, however, showed the most promise and set numerous age-group records from as young as the age of seven. He scaled four metres for the first time at age 13 and had progressed to five metres just two years later.

He scaled a world U20 record of 5.75m during the indoor season and improved the mark to 5.90m outdoors, also breaking the senior Swedish record in the process. He went on to win the European U20 title before reaching the final at the World Championships London 2017, placing ninth.

His momentum continued in 2018. He finished seventh at the World Indoor Championships Birmingham 2018, then went over heights of 5.92m and 5.93m in his first few competitions of the outdoor season. He became a regular on the Diamond League circuit and won in front of a home crowd in Stockholm. In other competitions, he beat the likes of world record-holder Renaud Lavillenie and world champion Sam Kendricks.

He went into the European Championships as one of the medal favourites, having won the world U20 title in Tampere, but few would have predicted he would win – and so convincingly. The 18-year-old popped over 6.00m on his first attempt, becoming the youngest six-metre vaulter in history, and then went on to scale 6.05m, a world U20 record.

Duplantis enrolled at Louisiana State University and had full collegiate indoor and outdoor seasons in 2019. He turned professional half way through the year and went on to notch up victories and big vaults on the international circuit. He closed out his season at the World Athletics Championships Doha 2019, where he took the silver medal with 5.97m.

With no collegiate competition commitments to contend with, a rejuvenated Duplantis started his 2020 campaign with a bang, clearing 6.00m in his first competition of the year at the World Athletics Indoor Tour meeting in Dusseldorf. That was just a taster of what was to come, though, as four days later he cleared a world record of 6.17m in Torun.

He still wasn’t finished, though. At the World Athletics Indoor Tour meeting in Glasgow one week later, Duplantis stunned the athletics world again, improving his world record mark to 6.18m.

The Covid-19 pandemic disrupted the early part of his outdoor season, but by the time of the Wanda Diamond League meeting in Monaco in August, Duplantis was once again in full flow, winning with 6.00m. He continued his winning streak with six-metre vaults at the Diamond League meetings in Stockholm, Lausanne and Brussels.

At each of those meetings, he had attempted 6.15m – what would be the highest ever outdoor vault – but was unsuccessful each time. At the Golden Gala in Rome, however, it finally clicked and he got over 6.15m on his second try. Aged just 20, Duplantis became the highest vaulter in history, indoors and outdoors.

Major events returned in 2021 and Duplantis rose to the occasion at the two biggest championships of the year. The first was the European Indoor Championships in Torun, where he won with 6.05m. He then maintained that form for most of the outdoor season and delivered on the biggest stage of all, winning gold at the Tokyo Olympics with 6.02m.

He started 2022 with two key initial aims – to break the world record again and win world indoor gold. Opening his season with a 6.02m win in Karlsruhe, he went on to also triumph in Berlin, Uppsala and Birmingham, going higher than six metres each time. But he was just getting warmed up. Competing at the World Athletics Indoor Tour Silver meeting in Belgrade, at the same venue that would host the World Athletics Indoor Championships Belgrade 22 a couple of weeks later, he achieved 6.19m on his 54th attempt at the height but knew there was more to come.

He was right. Returning to the Stark Arena, he achieved 6.20m on just his third try to secure his first senior world title.

So now how high does he think he can go?

Given the manner in which he cleared a world record of 6.21m* in Oregon to win his first senior world title, it seems that the Swedish vaulter is still some way from reaching his limit – whatever that may end up being.