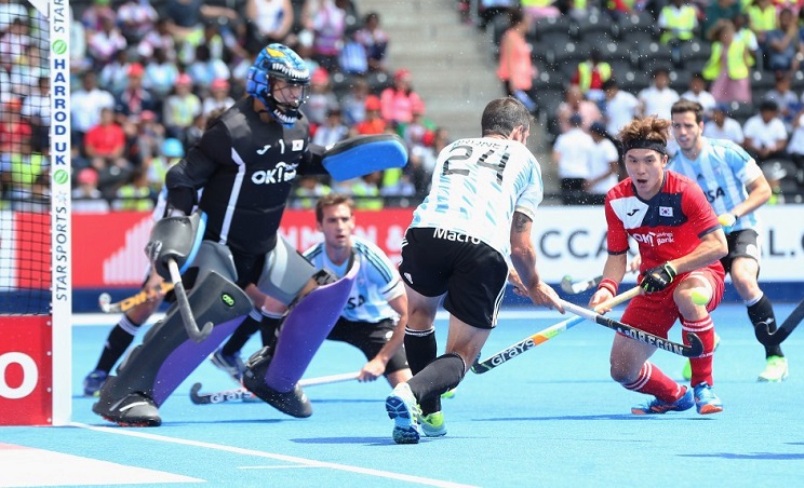 The men’s Hero Hockey World League Semi-Final competition got underway at the London’s Lee Valley Hockey & Tennis Centre on Thursday, with Olympic champions Argentina, European champions the Netherlands, host nation England and Asian giants India all claiming victories.
The opening fixture of the event was a closer than expected Pool A contest between Korea (FIH Hero World Ranking: 12) and Rio 2016 gold medallists and world number ones Argentina.
The Koreans gave an excellent showing of themselves in the opening stages but fell behind against the Olympic champions thanks to a trademark penalty corner rocket from Gonzalo Peillat, who sent an unstoppable effort inside the right post.

To their great credit, Korea battled hard and forced an equaliser at the start of the fourth quarter, with Argentine goalkeeper Juan Vivaldi sending an attempted clearance onto a Korean stick before Lee Namyong pass the ball into an empty net.

As he so often does, Peillat made a winning contribution in the 53rd minute when he guided a low penalty corner effort between the legs of Korea goalkeeper Hong Doopyo to give Los Leones a narrow but deserved 2-1 victory.

Home favourites England (WR: 7) were also winners on the first day of Pool A action, battling to a 2-0 win against a well organized, defensively resilient China (18). England scored two goals in the 11th minute thanks to Barry Middleton’s open play effort and a penalty stroke from Mark Gleghorne, but excellent defensive work from the China team denied the host nation a third. England’s victory was deserved, but China’s performance provided evidence that they may well spring some surprises here in London.

In Pool B, India (WR: 6) claimed an opening day victory over Scotland (WR: 23), but they were given a real test by the Blue Sticks before eventually recording a 4-1 triumph. Scotland took a shock lead in the sixth minute of the match when team captain Chris Grassick pounced from close range.

It was an advantage that they would hold until a third quarter in which India scored four times without reply, with Ramandeep Singh netting twice before an Akashdeep Singh deflection and Harmanpreet Singh penalty corner killed off any hopes of an upset.

Despite the defeat, Scotland Head Coach Derek Forsyth certainly felt that there were plenty of positives to take away from the contest. “We got off to a great start and played really well throughout the first quarter, certainly defensively. At half time we discussed being better on the ball and trying to cause a few new problems for India. Unfortunately we got off to a bad start in the third quarter, and got punished. We know where we need to improve, and we will, and our aim is to improve with each performance throughout the tournament.”

The Netherlands (WR: 4) and Pakistan (WR: 13) were also in action on the opening day in Pool B, with the mighty Dutch proving too strong for their opponents to win 4-0. Thierry Brinkman was in the right place at the right time to give The Netherlands the lead after just six minutes, with Mirco Pruijser doubling the advantage four minutes before half time.

Penalty corner ace Mink van der Weerden made it 3-0 in the third quarter with a sensational drag-flick into the top right corner before Robbert Kemperman completed the scoring 11 minutes from the end of the contest.

“Four-zero against Pakistan is a really good start for us as they are a difficult side to play against”, said Thierry Brinkman – who scored within sixty seconds of his introduction as a fifth minute substitute. I think it was only my second touch of the game, but it was a great pass from Kemperman and I was lucky enough to get a good trap before smashing it into the goal.”

The action continues on Friday when Pakistan and Canada go head to head in a Pool B contest at 1800 GMT, with Argentina facing Pool A opponents Malaysia at 2000.

They will be joined by the top three finishers from the Semi-Final competition in Johannesburg, South Africa, plus the highest ranked fourth place finisher from the two Semi-Final events.
When it comes to qualification for the Odisha Hockey Men’s World Cup Bhubaneswar 2018, there are five automatic berths available here in London, although this will increase depending on the outcomes of the upcoming Continental Championships, which are also World Cup qualification events.
We will be providing full coverage of the event via www.fih.ch including reports, news stories, event imagery and much more. There will also be comprehensive coverage of the event via our social media channels, including Facebook, Instagram and Twitter using the #HWL2017 hashtag.
HOCKEY WORLD LEAGUE
10 teams will take part in each Semi-Final. They are comprised of the hosts plus five teams who qualify based on their FIH Hero World Ranking and four teams qualified through Hockey World League Round 2 events. In total, 20 men’s and 20 women’s teams will be taking part in the Hockey World League Semi-Finals.
Men’s Hero Hockey World League Semi-Final, London 2017 (England, 15-25 June 2017):
Pool A: Argentina; England; Korea; Malaysia; China.
Pool B: Netherlands; India; Pakistan; Canada; Scotland.