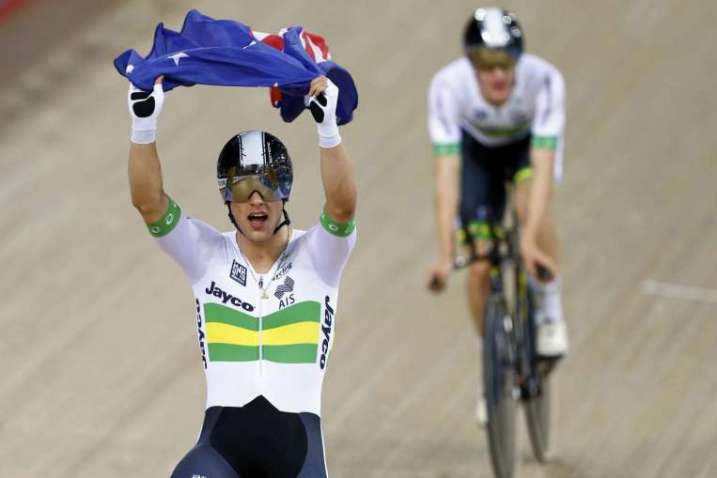 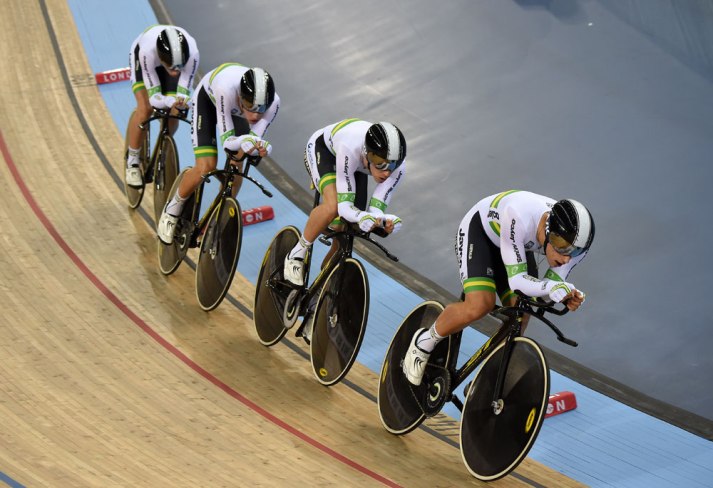 The long-standing rivalry between Australia and Britain continued in thrilling fashion in the track world championships team pursuit final on Thursday as the Australians recorded the second fastest time ever to win gold.

A British team led by former Tour de France champion Bradley Wiggins, and roared on by a capacity 8,000-plus crowd at the Olympic velodrome, had to settle for silver against a winning team of Sam Welshford, Michael Hepburn, Callum and Miles Scotson.

The Australians built a consistent early lead of between 0.6 and 0.7 seconds but a sterling effort by Ed Clancy, riding his first race since undergoing career-threatening back surgery 12 weeks ago, cut the advantage and Wiggins drove the hosts into the lead briefly before Clancy tailed off over the last lap.

The winning time of 3 minutes 52.727 seconds was 1.1 seconds ahead of Britain and establishes Australia as favourites to win gold in the event in the Rio Olympics.

“For sure, we will have to ride three seconds faster than that to win gold in Rio,” said Hepburn.

“It’s no secret, you’ve just got to find four guys who can do that. But both teams have proved they’re on their way.

“If you look back over the last few Olympic cycles, whoever won at the Worlds won the Olympics. I don’t necessarily believe that and there’s still a lot of work we’ve got to do.

Wiggins, 35, was particularly dominant throughout the three rounds of the event and is still aiming to end his glorious career by wining gold in Rio.

“In 17 years of team pursuiting that is the strongest I have been in a team pursuit so there is a bit of life left in me yet,” he said.

“And I have another four or five months left to try to get even stronger.

“I think it shows my commitment, coming away from the road and putting all that time in the gym and doing all that power work.”

The women’s keirin saw Kristina Vogel enjoy the better of her rivalry with Australia’s Anna Meares as she reclaimed the title she won in 2014.

Meares was the defending champion but she had no answer to the German’s power as she sprinted to a convincing victory in a time of 11.276 seconds.

Meares will now turn her attention to trying to stop Vogel from winning a third consecutive gold in the individual sprint competition.

“The keirin has been my biggest focus,” she said. “And I’m pleased with the result tonight. The sprint is going to be a very difficult contest.

“The depth and quality of the field has extended since London (2012). To get to the semis, there are certainly no easy rides in the individual sprint.

“And you get battles within nations with people going for Olympic selection. It’s just so cut-throat and intense.”

Becky James, world champion in 2013 but troubled by injury and illness since, made a successful return to top-level competition with a bronze medal for Britain.

Laura Trott won the first medal for the host nation, adding world gold to the European title she claimed last year in the scratch race.

The double gold medalist from the London Olympics put in a magnificent late effort to chase down a breakaway group on her own and then rode on to hold onto first place.

Germany’s Joachim Eilers denied Theo Bos what would have been a popular gold medal in the one kilometre time trial as the veteran Dutchman continues his return to the track after a spell in road racing.

Bos, 32, was second of the 15 riders to start and set a superbly-paced time of 1 minute 00.461 seconds which stood until Eilers, the last rider to leave the start gate.

The powerful 25-year-old, a silver medalist in the time trial at the worlds 12 months ago, was marginally ahead throughout the ride, eventually recording a winning time of 1 minute 0.42 seconds. – Agence France-Presse