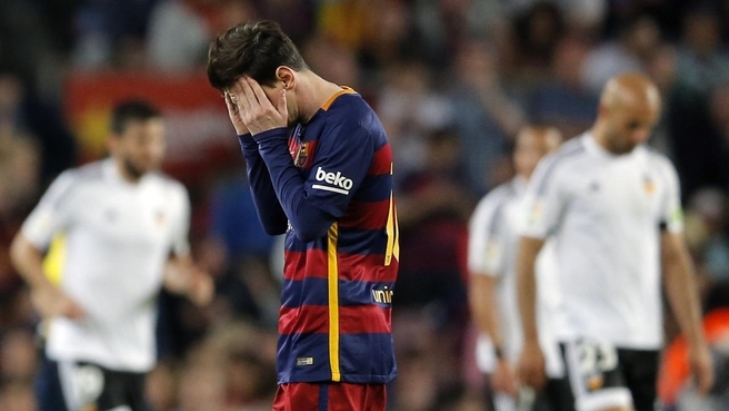 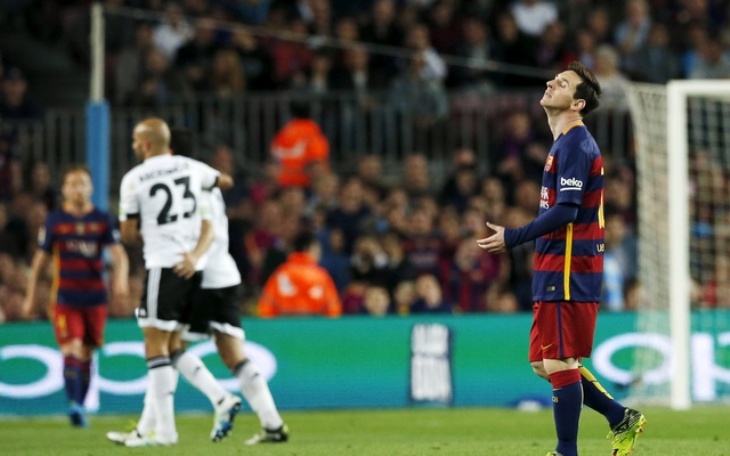 Atletico Madrid are now level on 76 points with Barca at the top of La Liga with five games remaining as they beat Granada 3-0, but the Catalans retain the lead thanks to their superior head-to-head record.

Third-placed Real Madrid are also only a point behind thanks to their 5-1 win at Getafe on Saturday.

Valencia were beaten 7-0 by Barca on their last trip to the Camp Nou just two months ago under former boss Gary Neville, but gained revenge thanks to Ivan Rakitic’s own goal and Santi Mina’s classy finish before half-time.

Messi ended a five-game goal drought to bring up his 500th for club and country, but couldn’t inspire a Barca fightback as their alarming collapse in recent weeks continued after a 39-game unbeaten run.

Having looked well set for a second consecutive treble just two weeks ago, Barca could now miss out on all three major trophies as they were dumped out of the Champions League by Atletico in midweek and have taken just one point from their last four La Liga games.

However, in contrast to recent defeats, Barca boss Luis Enrique praised the performance of his side and believes they are capable of winning their last five games to retain the title.

“Luck didn’t shine on the team. I congratulate my players for how they faced the adversity during the game,” said Enrique.

“We still depend on ourselves. Our margin for error has run out and we are aware of the challenge.

“Now we have a marvellous challenge, five games in which if we win them all we are champions”

The Brazilian blocked Messi’s volley from close range before somehow springing to punch away Neymar’s lob which seemed destined to evade him.

However, Valencia amazingly went in at half-time two goals to the good having had just one shot on target.

The visitors went in front on 27 minutes when Rakitic turned Guilherme Siqueira’s cross into his own net at the near post and doubled their lead thanks to a brilliant move in first-half stoppage time as Dani Parejo played in Mina to fire into the far corner.

Rakitic had a huge chance to make amends for his own goal a minute into the second-half, but pulled his effort tamely wide from Luis Suarez’s fine cut-back.

However, Barca were finally given hope when Jordi Alba’s low cross was turned home by Messi to reach another historic landmark.

Alves came to Valencia’s rescue once more with his best save of the night low to his right to prevent Rakitic equalising 15 minutes from time.

Neymar’s fiercely struck volley was somehow deflected behind by Shkodran Mustafi, but Valencia should also have killed the game off at the other end when Paco Alcacer miscued from point-blank range allowing Sergio Busquets to clear off the line.

Gerard Pique then had a glorious chance to salvage at least a point late on, but he pulled his shot wide with just Alves to beat.

In contrast to Barca’s collapse, Atletico are flying in the final stages of the season as Fernando Torres struck his fourth goal in as many games in a routine win over Granada.

“It will be tough (to win the league), but we will play as the schedule demands us to which is to win, win and win again,” said Atletico boss Diego Simeone.

Koke ensured Atletico would have no hangover from their efforts in dispatching Barca from the Champions League in midweek as he swept home the opener on 15 minutes before teeing up Torres to dink home just before the hour mark.