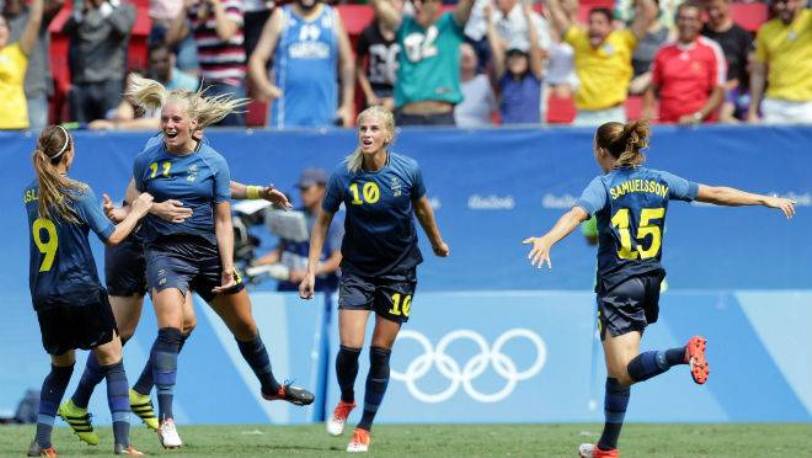 Outspoken USA women’s goalkeeper Hope Solo labelled Sweden “cowards” after the world champions’ bid for a fourth straight Olympic gold ended, whilst Brazil edged past Australia in a marathon penalty shootout despite a miss from star Marta in Friday’s quarter-finals.

Sweden progressed to their first ever Olympics semi-final 4-3 on penalties after a 1-1 draw in Brasilia as Sweden coach Pia Sundhage ousted the US team she led to gold in 2008 and 2012.

“We played a bunch of cowards,” Solo told SportsIllustrated.

“The better team did not win today. I strongly believe that. I think you saw American heart. You saw us give everything we had today.”

“It is ok to be coward if you win,” Sundhage shot back.

“What she did was an act of panic,” said Swedish ‘keeper Hedvig Lindahl of Solo’s time-wasting tactics before the final penalty.

“They executed her game plan very well. It’s a matter of knowing how to use all the resources you have,” said the Englishwoman.

“And finally the most important thing is the result, not how to play.”

120 minutes of high drama in front of a near capacity 60,000 crowd in Belo Horizonte produced no goals between Brazil and Australia.

Both teams then found the net with their first four penalties, but Brazil’s bid for a first gold medal looked lost when national hero Marta saw her effort saved by Lydia Williams.

The five-time World Player of the Year was on her knees in tears of relief seconds later, though, as Barbara parried Katrina Gorry’s spot-kick to keep the hosts alive.

Another five penalties were scored before Barbara produced more heroics to turn Alanna Kennedy’s shot behind for a 7-6 win and spark wild scenes of celebration.

“I didn’t want to be the focus of attention in that way,” said Marta.

“I leave (the attention) to Barbara.”

Next up for Brazil is a rematch with Sweden, who they beat 5-1 in the group stages, in Rio’s iconic Maracana on Tuesday.

Sweden inflicted America’s first in 15 games at the Olympics and only their third ever in Games history having won four golds and a silver since women’s football was introduced to the Olympic programme.

Morgan looked to have saved America’s blushes when she swooped 13 minutes from the end of normal time to cancel out Stina Blackstenius’s opener just after the hour mark.

But the world’s number one ranked side failed to break down Sundhage’s well-organised Swedes in extra-time, who also had a perfectly good goal from Lotta Schelin wrongly ruled out for offside in the final minutes.

“I don’t think they’re going to make it far in the tournament. I think it was very cowardly,” added Solo.

“We had that style of play when Pia was our coach.”

Sundhage insisted she had full faith the Swedes could pull off a massive upset despite scoring just twice in three matches as they sneaked into the last eight as one of the two best third-placed sides from the group stages.

“When I looked at my players before starting the extra time and penalties and I was so confident in my players,” she added.

Solo’s Games has been dogged by controversy as she received chants of “Zika” from fans across Brazil for Twitter posts on her elaborate precautions against the virus.

Canada maintained their perfect record in Brazil to set up a semi-final with Germany in Belo Horizonte thanks to Sophie Schmidt’s winner in a 1-0 win over France.